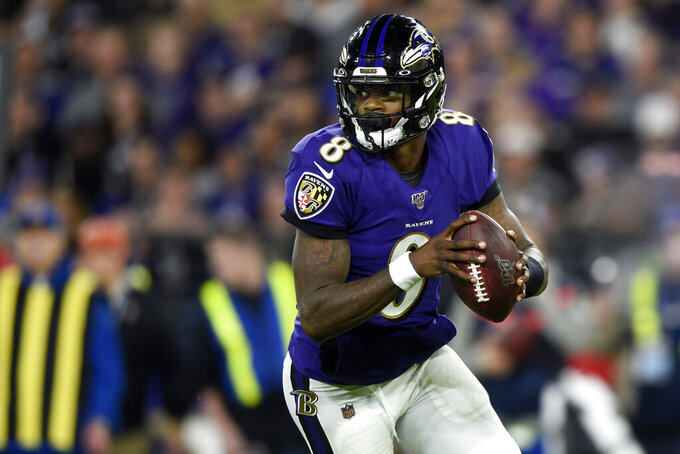 FILE - In this Jan. 11, 2020, file photo, Baltimore Ravens quarterback Lamar Jackson (8) rolls out of the pocket during the first half an NFL divisional playoff football game, against the Tennessee Titans in Baltimore. The reigning NFL MVP is eager to get started at training camp practice following an offseason in which he had a perilous encounter with a jet ski, tossed footballs to Antonio Brown and diligently avoided the coronavirus. (AP Photo/Gail Burton, File)

Baltimore Ravens quarterback and reigning NFL MVP Lamar Jackson is eager to get started at training camp following an offseason in which he had a perilous encounter with a jet ski, tossed footballs to Antonio Brown and diligently avoided the coronavirus.

Jackson guided the Ravens to a 14-2 regular-season record in 2019, setting a league record for yards rushing by a quarterback and serving as the focal point of an attack that amassed an unprecedented 3,296 yards on the ground.

Following an unsightly playoff-opening loss to Tennessee, the multi-faceted quarterback collected his MVP trophy and embarked on an offseason that took a sharp turn toward uncharted waters when the COVID-19 pandemic struck in March.

Speaking of water, Jackson made a splash on Twitter with a post that showed him on one of his standard impromptu runs during a pickup game on the beach. After dodging a would-be tackler, Jackson veered to his left into the path of a jet ski parked in the shallow surf.

“I did not run into a jet ski. I jumped over the jet ski and fell in the water," Jackson said with a grin during a Zoom call Wednesday from the Ravens training complex.

In an effort to make up for time lost due to the cancellation of minicamp, Jackson got together on a practice field in Florida with teammate Marquise Brown and the young receiver's cousin, former NFL wideout Antonio Brown.

Antonio Brown recently announced his retirement following a rocky stretch in which he was cut by New England in September and later accused of sexual assault by his former trainer. Regardless, Jackson insists the seven-time Pro Bowl star would be a good fit with the Ravens.

“It was nice throwing to Antonio Brown," Jackson said. “I was hoping we would get him. Still hoping, a little bit."

“That's the type of guy we need in our locker room," Jackson declared. “We want to win, and I can tell he wants to win. He wants to play ball."

Now on the verge of starting his third NFL season, Jackson expects to ramp up his game quickly this summer after spending the past four months practicing social distancing instead of drills with the team.

“I wish I was with my guys in OTAs in April like usual, but COVID-19 had a better idea," Jackson said.

Jackson ran for 1,206 yards and threw 36 touchdown passes last year, so it would appear as if there's little room for improvement. But Jackson, who won the 2016 Heisman Trophy Award with Louisville, insists that he's not even close to being satisfied with his game.

“Last year is in the past," he said. “I've just got to do better, keep grinding. I'm working on everything — passing, running ability. I feel like the sky's the limit, not just for me but the organization."

Jackson replaced Joe Flacco as the starter during the 2018 season and helped the Ravens to a 6-1 finish for a berth in the postseason. Last year, Baltimore took a 12-game winning streak and the league's best record into a home game against the Titans.

Unfortunately, the Ravens came up flat against Tennessee, just as they did in Jackson's postseason debut one year earlier, a 23-17 loss to the Chargers.

Jackson can't wait to do something about that 0-2 postseason record, but his immediate target is winning the opener on Sept. 13.

“Our job is to focus on the Cleveland Browns," he said. “We want to get back to the playoffs and go from there."

Jackson understands that his running ability separates him from most other quarterbacks in the league. But he will be happy to let the guys behind him handle the brunt of that chore, and the Ravens have four players fully capable of doing so.

“We've got Mark Ingram, Gus Edwards, Justice Hill and J.K. Dobbins," Jackson said. “I feel like we're going to be pretty good with the running part. But if I have to, I'll do my thing."

Jackson still has two years left on his rookie contract, so it's a bit early to ask him about his chances of getting a deal like the whopping $503 million package provided to Kansas City's Patrick Mahomes, a versatile quarterback whose skills are similar to Jackson's. The big difference is that Mahomes has a Super Bowl ring, and Jackson is still looking for his first postseason win.

“I've just got to win a Super Bowl. I can't really focus on what (Mahomes) has going on because I still have to prove myself," Jackson said. “When that time comes, we can negotiate after the Super Bowl. Until then, we're focusing on winning right now."