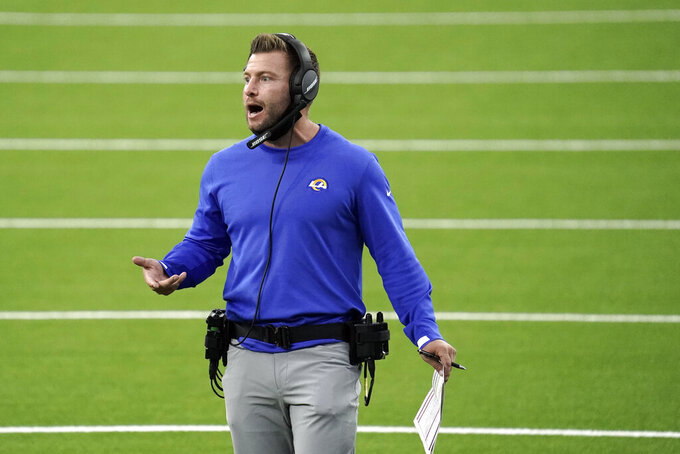 The NFL on Monday reminded team personnel on the sidelines about the COVID-19 requirements for wearing face coverings, saying such carelessness or disregard could put the season “at risk.”

There were several games Sunday in which team members other than players did not use face coverings.

Troy Vincent, who oversees the league's football operations, sent a memo to the 32 clubs. He stressed that teams "must remain vigilant and disciplined in following the processes and protocols put in place by not only the league, union and clubs, but also by state and local governments.”

After congratulating the teams for overcoming coronavirus challenges and beginning the regular season on time, Vincent strongly cautioned against undoing that work.

He referred to the game-day protocols developed by the league and the NFL Players Association that reflect the advice of infectious disease experts, club medical staffs and local and state governmental regulations.

Those require all individuals with bench area access, including coaches and members of the club medical staff, to wear face coverings at all times.

“Failure to adhere to this requirement will result in accountability measures being imposed against offending individuals and/or clubs,” the memo said. “The face covering must be worn as designed so that it securely fits across the wearer’s nose and mouth to prevent the transmission of the virus.”

Punishment for not adhering to the protocols has not been announced, but could include anything from fines to ejection from the sideline.

During the Sunday night game between Dallas and Los Angeles, Rams coach Sean McVay often was shown on camera without a face covering. He hardly was the only coach or team member with a bare face during the 13 games Sunday.

“I figured that memo was directed at me. I’ve got to do a better job about that, and so, moving forward, there will be a conscious effort to do that,” McVay said.

Would he switch to a face shield like Chiefs coach Andy Reid wore?

“That’s a good question,” he replied. “I haven’t decided that yet. I might even try one of the gaiters. I don’t know. I just know I’ve been getting blasted about it all day. I just love it. ... I will do better.”

Raiders coach Jon Gruden also knew who the NFL was referring to.

The “Bench Area” under the 2020 league protocols is the sideline on each side of the field and is delineated with a yellow dotted line between the 30-yard lines. Team personnel with Bench Area access must stay within the 32-yard lines, which are delineated with a white line.

“All individuals with Bench Area access, except for players, shall be required to wear masks at all times,” the rules say. “Coaches must wear either a mask, neck gaiter, and/or face shield to satisfy this obligation. Players who are not substituting into the game are strongly encouraged to wear masks on the sidelines, except for at games played in stadiums with state or local regulations that make the wearing of masks mandatory. In such cases, players on the sidelines must wear masks.