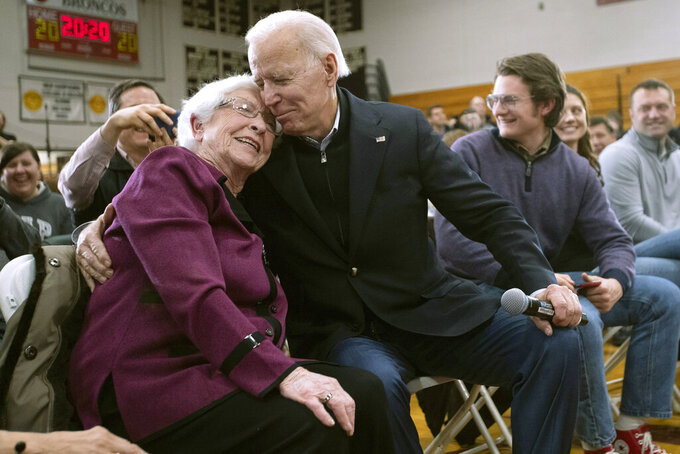 CONCORD, N.H. (AP) — The coronavirus pandemic, which brought everyday life to a halt and tested people's resiliency, was New Hampshire's top story of 2020.

To get back on track, lawmakers, business leaders and state officials listened to public testimony and advised Gov. Chris Sununu on reopening the state. The 400-member House convened at the University of New Hampshire’s ice arena. Cargo planes delivered thousands of pounds of personal protective equipment to the state and to Veterans Affairs hospitals nationwide.

A number of communities issued mask-wearing ordinances and Sununu followed with a statewide order in November requiring face coverings in public.

Many residents came to one another's aid, whether they held drive-by birthday parades, hosted creative graduations — including one on a mountaintop — and gathered food and funds to help their neighbors survive the economic downturn caused by the pandemic.

In what seems like another era, multiple Democratic presidential candidates descended upon New Hampshire leading up to its first-in-the-nation primary on Feb. 11. Vermont U.S. Sen. Bernie Sanders won; Joe Biden finished fifth. The pandemic affected campaigning and voting alike, with residents turning in droves of absentee ballots. Biden won New Hampshire on Election Day and Democratic incumbents were reelected to Congress. Republican Gov. Chris Sununu won his third term and the GOP won control of the Legislature, but House Speaker Dick Hinch died from the coronavirus just a week after he was sworn in. He was 71.

New Hampshire will overhaul its police training standards, require state troopers to wear body cameras and establish a public integrity unit under an executive order issued by Sununu. It implements many of the recommendations of the Commission on Law Enforcement, Accountability, Community and Transparency that Sununu created in June in response to the death of George Floyd in Minneapolis.

Mink, a black bear that trekked thousands of miles to return to her home turf after she was relocated by order of the governor, died. One of her cubs was struck and killed by a bus. In 2017, Mink and three of her offspring were set to be euthanized after two cubs entered a Hanover home. Sununu, instead, ordered them to be moved far north, but Mink returned the following year with four new cubs. In 2018, she was fitted with a tracking collar and moved again, but returned.

The National Transportation Safety Board unanimously approved a report that a pickup truck driver's impairment from drugs was the “probable cause" for him colliding with a group of motorcyclists in Randolph last year, leading to the deaths of seven bikers. Volodymyr Zhukovskyy, who awaits trial, told authorities he regularly used heroin and cocaine, but believed he wasn’t impaired at the time of the crash. He's pleaded not guilty.

Amer Fakhoury, an American citizen who was jailed for months in his native Lebanon and released in March over decades-old murder and torture charges that he denied, died. The 57-year-old restaurant owner in Dover had been diagnosed with Stage 4 lymphoma while imprisoned. His family reopened the restaurant and started a foundation in his name to help families of Americans held hostage overseas.

Gov. Chris Sununu signed into law a bill that sets some of the nation’s toughest drinking water standards for a group of toxic chemicals and provides tens of millions of dollars for cleanup cost. The bill includes standards put forth last year by the state Department of Environmental Services for potentially harmful chemicals called perfluoroalkyl and polyfluoroalkyl substances, also known collectively as PFAS.

Carmen Blandin Tarleton, whose face was disfigured in an attack by her ex-husband, became the first American and only the second person globally to undergo a second face transplant after her first one began to fail six years after the operation. The transplant from an anonymous donor took place at Boston’s Brigham and Women’s Hospital in July.

British socialite Ghislaine Maxwell was arrested at a wooded estate in Bradford on charges she helped lure at least three girls to be sexually abused by the late financier Jeffrey Epstein; tax protester Elaine Brown was released after 12 years in prison, but husband Edward Brown was resentenced to 25 years; self-proclaimed white nationalist Christopher Cantwell was convicted of making a rape threat; and prosecutors said a man, who discovered his wife was having an affair, kidnapped and killed the other man and forced his wife to decapitate him.

New Hampshire lost Tomie dePaola, the prolific children’s author and illustrator who delighted generations with tales of Strega Nona, the kindly old witch in Italy; Steve Merrill, a Republican who served as governor for two terms in the 1990s; Bob Bahre, who brought NASCAR racing to the New Hampshire International Speedway; and Rogers Johnson, president of the Seacoast NAACP and chair of the Governor’s Advisory Council on Diversity and Inclusion.