NHL not planning to quarantine players for training camps 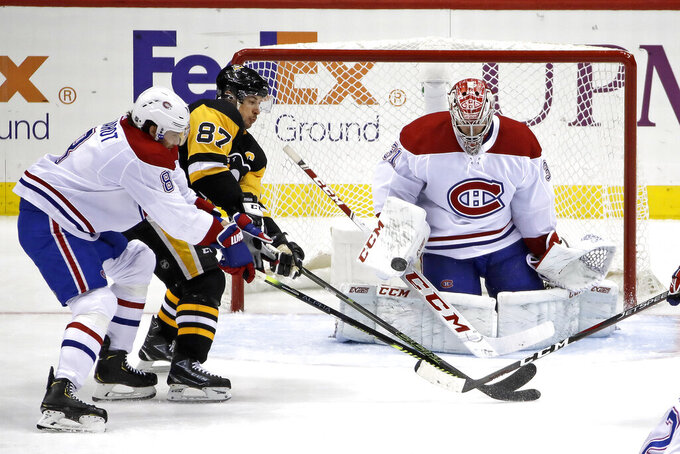 FILE - In this Feb. 14, 2020, file photo, Pittsburgh Penguins' Sidney Crosby (87) can't deflect a shot in front of Montreal Canadiens goaltender Carey Price (31) with Ben Chiarot (8) defending during the third period of an NHL hockey game in Pittsburgh. Crosby doesn't mind going directly into playoffs given the limited timing. His reward is a matchup against elite goaltender Price and the Canadiens. (AP Photo/Gene J. Puskar, File)

Jason Spezza's confidence in the NHL returning has not been shaken by word of 11 fellow players testing positive for the coronavirus.

Given his involvement in NHL Players' Association talks, the veteran Toronto forward knew from doctors' input there would be positive test results in hockey just as there have been in other sports as group workouts ramp up across North America.

Those very well may continue to happen with training camps scheduled to open July 10, yet deputy commissioner Bill Daly confirmed Thursday the league and NHLPA are not considering putting teams in quarantined “bubbles” for those mandatory sessions. Instead, players are being instructed to stay home when not at the rink, with the hope that frequent testing and health protocols will prevent any outbreaks before, hopefully, games resume in two “hub” cities in late July.

“I'm pretty confident that once we get into hub cities, we'll be able to do a good job of keeping it out,” Spezza said. “I think getting there is going to be the challenge, and that’s where it takes a little bit of discipline for us as players to make sure we don’t kind of derail the plans.”

The league and players are still working to finalize a return-to-play agreement that would entail a 24-team playoff to award the Stanley Cup. It's understood that players, coaches and staff would be quarantined from the general public for the duration of the playoffs and tested regularly.

Until arriving in one of those cities as early as July 23 or 24, players and their families are still out in the real world and face the risk of exposure.

“You have a whole bunch of people in close proximity to each other for prolonged periods of time, they may be traveling together exposed to other individuals that you don’t know who they’ve been exposed to,” Atrium Health medical director of infection prevention Katie Passaretti said. “Any time you’re bringing groups together and then sending them back out into the world, there’s potential for further spread if one of those individuals was asymptotically infected or early in the stages of symptomatic infection.”

“There’s lots of people everywhere testing positive,” said Spezza, who's in his 17th NHL season. “Us as players, we realize there’s going to be some risk of a positive test, especially in the phases that we’re in right now.”

Voluntary workouts of up to six players on the ice at a time were able to begin June 8, with that limit increased to 12 this week amid stringent safety protocols. In other sports, Major League Baseball closed its training facilities in Florida and Arizona, and the NFLPA told its members to stop private workouts in light of rising coronavirus numbers in some places.

“It’s definitely eye-opening to hear, but at the same time, looking back going into it, you certainly expect that to pop up,” Boston defenseman Matt Grzelcyk said. “You see more and more cases popping up across the league and that’s to be expected, as well. But at the same time, it’s still a little nerve-wrecking.”

Two weeks away from the scheduled start of camps and less than a month from when games might begin, some players still have questions.

“Obviously health and safety is the biggest," Montreal goaltender Carey Price said. “Being able to come to a situation where you don’t have to worry about contracting COVID-19 is huge. To ‘bubble’ the players and feel safe in your work environment is going to be probably the most paramount.”

Players are expected to be tested daily once competition starts, and they will be isolated with each other. Even with frequent testing during camps, it seems to be incumbent on players, coaches, staff and those around them to be particularly vigilant away from hockey.

“As everything around us starts opening up, we almost have to tighten up because we’re going back to play,” Spezza said. “We have to be probably a little more careful as we get closer to training camp here.”

One concern is for coaches and executives in the older age range that makes them more vulnerable to the virus. The Canadiens said 60-year-old coach Claude Julien intends on being behind the bench because "he has full confidence in the league’s ability to set in place the security measures necessary to ensure the safety of it all.”

Training camp, when upwards of 30 players will be together, is the first test of those procedures.

“I think everybody’s doing the best possible job they can to put everyone in the best position to stay healthy, and that’s the No. 1 priority is health and safety of the players and everyone else involved,” Pittsburgh goalie Matt Murray said. “Nothing is going to be perfect."