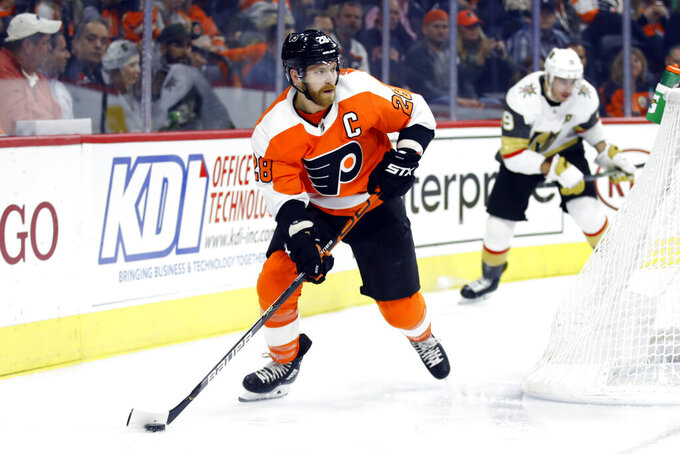 FILE - In this Oct. 21, 2019, file photo, Philadelphia Flyers' Claude Giroux controls the puck during an NHL hockey game against the Vegas Golden Knights in Philadelphia. Among the unknowns about the NHL returning amid the coronavirus pandemic is what the on-ice product might look like. (AP Photo/Matt Rourke, File)

Claude Giroux’s Philadelphia Flyers were the hottest team in the NHL back when hockey was still being played.

That was more than two months ago and their next game could be two more months away. He can’t predict how things might go if the season resumes.

Among the unknowns about the NHL returning amid the coronavirus pandemic is what the on-ice product might look like. In a team sport that demands rhythm and chemistry, players will have to quickly adapt after so much time apart to recapture what it takes to jump right into the playoffs and compete for the Stanley Cup.

“We want to see great hockey played,” Toronto captain John Tavares said. “It’s not an exact science. It’s something we’ve never dealt with before, and we want to make the best and most conscious decision we possibly can to obviously make sure not only guys stay safe, but that the quality of hockey is extremely high.”

Unlike basketball, where one player can dominate a game and carry a team, hockey is predicated on players being in sync, knowing where teammates are — and will be going next — for tape-to-tape passes. Timing as a unit is an essential ingredient to success, and it's that timing that could be missing early because of so much time off the ice.

With the exception of a handful of players who were rehabbing injuries, living in Sweden or somehow able to find an open rink, most haven’t skated since the season was halted in mid-March. Recapturing that skating stride and building back up to avoid injuries will be a big part of voluntary workouts before the anticipated start of training camps in July.

Some players have expressed concerns about their individual game skills, like Winnipeg winger Patrik Laine expecting himself to be “terrible” after so much time off. Many goaltenders don’t even have their gear with them, and getting back into a groove will take some time.

Pittsburgh’s Kris Letang thinks informal workouts limited to six players on the ice at a given time should be about all that and building up conditioning levels. He sees training camp as the time for coaches and players to do some team rebuilding.

“The skating and everything comes back pretty quick,” Columbus captain Nick Foligno said. “It’s the team mindset, the system play again, where you need to be -- that feel. That’s the only stuff you can really get when you’re doing the reps over and over and over again.”

Knowing full well he won’t have a month to work with players before games resume, Edmonton coach Dave Tippett dug up his notes from the abbreviated training camp he oversaw with the Coyotes going into the 2013 lockout-shortened season.

“It’s different because you know the players already,” Tippett said. “It’ll be a little bit like the start of a season where you’ve got to get up and going pretty quick.”

Absent the usual drills to practice rushes, the power play or penalty kill for months, players will have no choice but to acclimate to each other quickly. Washington general manager Brian MacLellan said he isn’t worried.

“I think players adapt,” MacLellan said. “Timing and speed and systems play usually takes a few weeks. It’s no different than a training camp coming in, except it’ll be ramped up - the intensity part - quicker. I think players will adapt to it. I think might be scrambly at first, but it’ll be accelerated because of the seriousness and what’s at stake if you’re playing for a championship.”

Even though teams are expected to play a couple of exhibitions before games that count, rediscovering chemistry quickly could make all the difference, especially for those in best-of-five qualifying round series to get to the final 16.

“We’re going to have to find a way to feel good but also get to our team game, get the fundamentals down that way again,” said Foligno, whose Blue Jackets would play Tavares’ Maple Leafs. “The team that can get to their game quickest is going to have success.”

Florida GM Dale Tallon considers it a benefit to have all teams on a level playing field going into a 24-team playoff. But the newness of the situation adds a layer of unpredictability and could make this one of the most competitive chases for the Stanley Cup in history.

“There’s going to be some teams that are going to disappoint because they lost their momentum, there could be injuries in the training camp period of time if we rush too fast to get these guys up to speed,” Nashville GM David Poile said. “It’s going to be like nothing we’ve done before.”