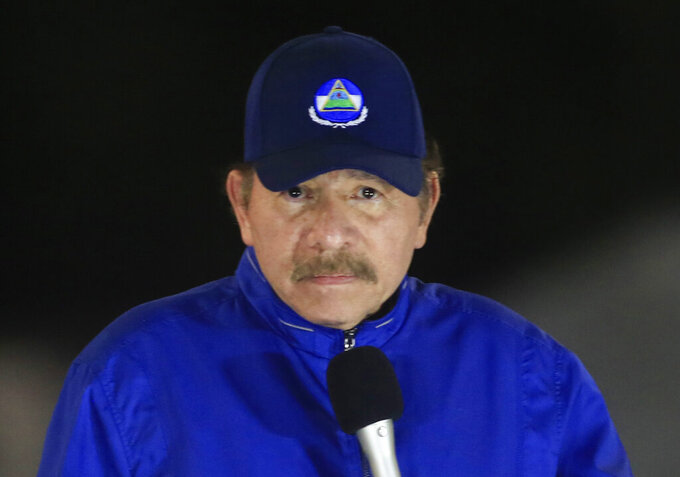 FILE - In this March 21, 2019 file photo, Nicaragua's President Daniel Ortega speaks during the inauguration ceremony of a highway overpass in Managua, Nicaragua. After not appearing in public for 34 days, Ortega spoke to the nation on Wednesday, April 15, 2020, and said that the country is fighting patiently against the new coronavirus pandemic. (AP Photo/Alfredo Zuniga, File)

In a nationally televised address, Ortega said more than 1,000 trucks were stranded on Nicaraguan highways. The dispute boiled over after Costa Rica on May 8 began testing all truck drivers entering the country for COVID-19.

Costa Rica said 61 truckers had so far tested positive, most trying to enter from Nicaragua though some were also entering from Panama. The truckers are tested at the border before being allowed to continue. Those who test positive are forced to turn around. Those showing symptoms are rejected without a test.

“It isn't Nicaragua that has closed the border,” Ortega said. “It is Costa Rica (that has) with measures it began to take, to demand, to establish.” He called the testing “a pretext” used by Costa Rican authorities.

Costa Rica's COVID-19 border testing policy was not only affecting regional trade and costing Nicaraguan businesses money, but the positive test results have been another piece of evidence suggesting the Ortega government's paltry reporting of COVID-19 cases lacks transparency.

Nicaragua has reported only 25 confirmed cases of the disease and eight related deaths. Those numbers have become more difficult to defend as more Nicaraguans speak out about the deaths of their relatives.

The lack of action in neighboring Nicaragua has concerned Costa Rican officials who have so far demurred when asked about the public health threat the country poses.

Costa Rica appears to have triggered Ortega's response by saying Friday that truckers bringing cargo to Costa Rica could leave it at the border and have Costa Rican drivers take it to the final destination. Those drivers transiting the country could still do so, but only after testing negative and with a police escort.

The Central American Council of Economic Integration Ministers discussed the measures Monday and asked Costa Rica to suspend its latest ones. Costa Rica proposed creating a regional protocol including bio-security measures and a working group to make sure commerce continues to flow freely.

Costa Rica Foreign Trade Secretary Dyalá Jiménez said the other regional members complained that the measures were not approved by the regional body and therefore lacked legal standing.

“This situation complicated the possibility of arriving at regional agreements to quickly allow us to address the situation at our borders,” she said.

Costa Rican business groups have also complained about the effects of the measures on commerce. The Costa Rica Exporters Chamber said the government's actions Friday had a negative impact on more than 1,000 Costa Rica exporters.

Costa Rica has 866 confirmed cases of the new coronavirus and 10 deaths.

Ortega said he was willing to talk to his Costa Rican counterparts to find a solution, “but it depends on Costa Rica.”