Nicaraguans testify of abuses in crackdown on protests 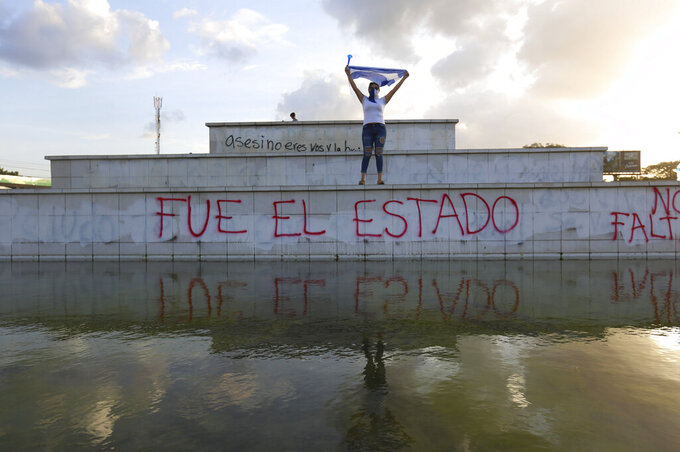 FILE - In this June 1, 2018 file photo, a masked protestor holds up a Nicaraguan flag above the Spanish graffiti phrase: "The state did it," during a protest against the government of President Daniel Ortega on National Children's Day in Managua, Nicaragua. Nineteen Nicaraguans who say they suffered torture and sexual abuse at the hands of their country's security forces during anti-government protests from April to August 2018 testified in San Jose, Costa Rica to a panel of legal and psychological experts the week of Sept. 11, 2020. (AP Photo/Alfredo Zuniga, File)

MANAGUA, Nicaragua (AP) — Eighteen Nicaraguans who say they suffered torture and sexual abuse at the hands of their country's security forces testified to a panel of legal and psychological experts this week, determined not to allow the pandemic to further forestall their search for justice.

The exercise, carried out over several days in a hotel in Costa Rica’s capital, was meant in part to build cases that could eventually be taken to regional and international courts.

The alleged abuses occurred during protests against the government of Nicaraguan President Daniel Ortega from April to August 2018. Police and forces dressed as civilians brutally repressed what Ortega termed an attempted coup.

The victims offered online video testimony of what the experts called systematic sexual abuse aimed at terrorizing their captives. It ranged from repeated rape to amputation of fingers and psychological torture.

The so-called Court of Conscience was organized by Costa Rica’s Arias Foundation for Peace and Human Progress. Some 80,000 Nicaraguan refugees and asylum seekers live in neighboring Costa Rica, including many who suffered abuses at the hands of Nicaraguan authorities.

The panel said in its final report Friday that it had concluded that “there is no doubt that the Nicaraguan state committed the crime of torture through sexual abuse and rape of women and men under the custody of the country’s police and para-police forces.”

The accounts offered to the panel could not be independently verified — the victims were not identified by name — but they were very similar to descriptions of abuses described to The Associated Press by victims in Nicaragua in 2018 and to those documented by human rights organizations.

“This can’t continue to be a simple complaint,” said Roberto Samcam, a retired Nicaraguan army major now exiled in Guatemala, who served as the panel’s chain-of-command expert. “We are documenting each case so that it can move on to a trial, possibly before the Inter-American Court of Human Rights.”

Nicaragua’s protests began in April 2018 with retirees demonstrating against announced changes to the social security system. When they were violently put down, students took to the streets and the protests expanded to a list of grievances against the government.

The country was largely paralized for months by roadblocks manned by protesters until they were dismantled by police and government loyalists. Those who participated say they continue to be pursued two years later. At least 328 people were killed, according to the Inter-American Commission on Human Rights.

Those who were caught were often taken to a Managua jail known as El Chipote.

“We saw how they raped the girls,” said one victim, who described seeing sexual assaults as well as fingers being cut off.

Another said she was caught by paramilitaries on a highway and when they found homemade explosives in her bag they assaulted her.

“They began to beat me with fists and kicks,” she said. “They threw me to the ground and two or three masked men raped me. While they raped me, another pointed a gun at me; I felt like I wanted to die."

Another victim testified that the only female captive she saw who wasn’t raped had suffered a miscarriage because of the beating she received.

Others reported broken jaws, teeth and noses from beatings. They were told their families would be killed and forced to watch the assaults on their friends.

“The practice of rape in Nicaragua by state agents constituted torture,” said Soraya Long, former director of the Center for Justice and International Law, who was a psychological expert advising the panel.

Requests for comment from the Nicaraguan government were not answered.

Samcam, the retired army officer, said government officials were involved in the abuses.

“There is a list of high-ranking authorities who were directly involved in those crimes,” including police chiefs, government officials, mayors and officials from Ortega's Sandinista Front party, he said.