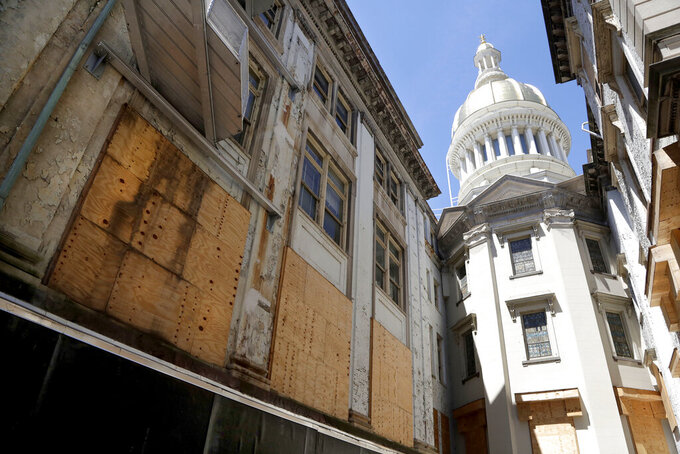 FILE - In this May 24, 2018, file photo, windows are seen boarded up during the renovation of the New Jersey Statehouse, in Trenton, N.J. The $300 million refurbishment that began soon after it was announced by former Gov. Chris Christie in late 2016 was supposed to take four years. In 2018, the completion date was expected to be 2022, and now Gov. Phil Murphy's administration says it'll be January 2023 before the renovation is done. (AP Photo/Julio Cortez, File)

TRENTON, N.J. (AP) — Like a desert mirage, the completion date for New Jersey's Statehouse renovation moves farther away the closer the calendar moves toward it.

The $300 million refurbishment that began soon after it was announced by former Gov. Chris Christie in late 2016 was supposed to take four years. In 2018, the completion date was expected to be 2022, and now Gov. Phil Murphy's administration says it'll be January 2023 before the renovation is done.

“At present it is still within budget and on time, with construction slated for completion in January 2023 and building occupancy expected for mid-year after installation of furniture, IT equipment, and other components,” Treasury spokesperson Jennifer Sciortino said.

How can it be on time, if it's later than initially thought?

The bidding process for general contractors took longer than expected, according to Sciortino, but moved into the general contracting phase in December 2019. That work is on track and expected to take about three years.

There have been other discoveries along the way, she added.

Workers found that the building's foundations are not adequate to support the structural loads they prop up, so digging and pouring stronger underpinnings is underway. That work is being done one small section at a time.

Workers are also constructing heating, cooling and ventilation shafts. A comprehensive system did not exist in the current building, which was pieced together over time. The older section dates to 1792, but newer parts had updates in the 20th century.

Statehouses across the country have been in the headlines as authorities prepared for the possibility of violent demonstrations after the insurrection at the U.S. Capitol on Jan. 6. While many state capitols saw barriers and fences go up, the Statehouse in Trenton has sat enclosed behind jersey barriers for years as part of the overhaul.

Another big effort underway is the restoration of giant skylight-like windows atop the third floor. They had been covered up previously and held together with duct tape, to the astonishment of officials working on the project.

“The comprehensive nature of this project means that virtually every mistake that has ever been perpetrated on this building will be corrected so that things finally work properly and efficiently," Sciortino said.

Businesses along State Street, home to the Statehouse, are eagerly awaiting its reopening. Unlike the building's overhaul, the coronavirus pandemic has stifled business, so they're hopeful a revitalized building will boost foot traffic.

“More people, that’s more business,” said Wayne Downing, the owner of the Success Salon barbershop across from the Statehouse. “You have to have more people moving in the area.”

Trenton Mayor Reed Gusciora was in the Legislature and opposed how Christie financed the renovation at the time. He said Thursday that historical tourism could pick up, along with greater use of the front entrance, which the governor and lawmakers once regularly used, along with lobbyists. The front steps — now closed off — also hosted rallies and protests, spilling into the street.

“I think it is important that the front doors of the statehouse open up once again,” he said.

New Jersey's is among the oldest statehouses in the country. During a tour of the renovation's progress in 2018, officials revealed they discovered 18th-century beams in the building's basement.

The structure was beset with problems when Christie ordered the overhaul, from the superficial to the serious.

Paint hung in curled sheets on the exterior walls, but it also lacked an exterior security screening area, unified HVAC system, accessibility for people disabilities, and — perhaps most worryingly — a fire suppression system.

Christie’s administration financed the rehabilitation through the Economic Development Authority, skirting a constitutional requirement for voters to weigh in on new debt.

Courts ruled the question is moot since bonds have been sold, and Christie cast himself as courageous for being willing to take the blame over the costs.