No. 1 Alabama preparing for Kentucky after two-week hiatus 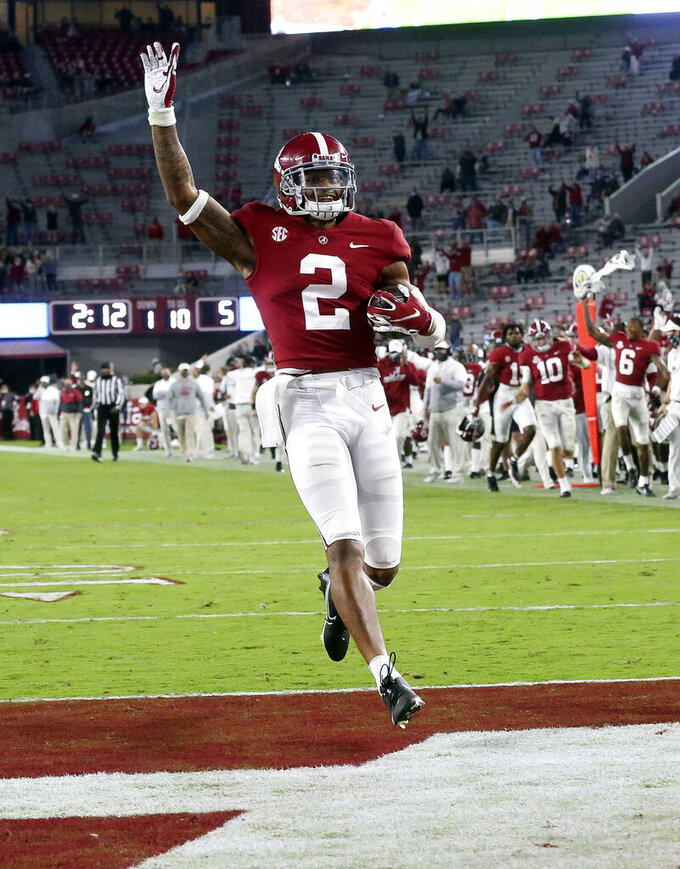 FILE - Alabama defensive back Patrick Surtain II (2) returns an interception for a touchdown against Mississippi State during the second half of an NCAA college football game in Tuscaloosa, Ala., in this Saturday, Oct. 31, 2020, file photo. Alabama is No. 1 in The Associated Press college football poll for the first time this year, Sunday, Nov. 8, 2020, extending its record of consecutive seasons with at least one week on top of the rankings to 13. (Gary Cosby Jr./The Tuscaloosa News via AP)

The top-ranked Crimson Tide, like many other teams around the Southeastern Conference and college football, had some extra time for off-the-field stuff lately. Alabama (6-0) faces Kentucky (3-4) Saturday coming off a two-week break, one that was scheduled and the other because of LSU's COVID-19 issues.

“I think psychologically is the real challenge for them to be able to stay focused on the things they need to do to continue to improve and to play at a high level, especially when we’re basically halfway through the season,” Saban said Monday.

Alabama-LSU was one of four SEC games called off last weekend, and Mississippi's visit to No. 5 Texas A&M is already off because of the Aggies' COVID problems.

Since last weekend followed the open date, Alabama will have gone three weeks in between games since rising to No. 1 following a 41-0 win over Mississippi State.

The benefit is the time to heal up from six straight SEC games. The downside is some rust and perhaps curtailing momentum built up from a series of lopsided wins, plus the potential loss of a grudge match against defending national champion LSU, though it was tentatively pushed to Dec. 12.

In the meantime, Saban and his players got more time to watch Tagovailoa lead the Miami Dolphins to a win over the Los Angeles Chargers. And during the first open weekend, Forristall proposed to his girlfriend.

“We had a bye weekend and I got to go home and propose,” said Forristall, who posted the video on social media. “It was a good win on a bye weekend."

Alabama was a heavy favorite to beat LSU anyway, and has won every game by at least 15 points to take firm control of the SEC's Western Division. Saban is placing the emphasis on dual priorities: Keeping up the strong play on the field and stressing to his team that staying in COVID compliance “has got to be of the utmost importance.”

He declined to give any updates on Alabama's status with positive tests for the virus or contact tracing. Saban said last Wednesday that the team had had only one positive test that week.