No. 1 'Bama can hand LSU 1st 2-game skid under Orgeron 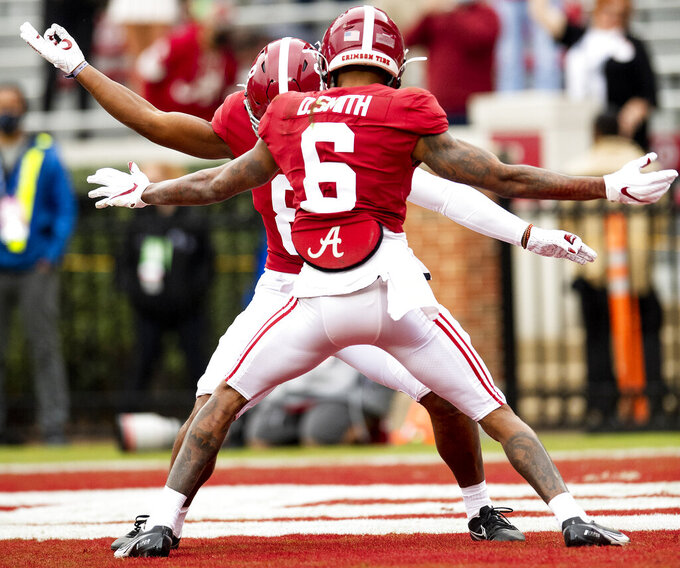 Alabama probably can afford one loss and still make the College Football Playoff, but a loss to a sub-.500 team would represent a considerable blemish on the Crimson Tide’s record. LSU, with no hope of a major bowl bid now, is bound to see a home date with Alabama as the single most important game of its season. A victory would be a major morale boost for a Tigers team that finds itself rebuilding just one season after winning a national title.

LSU secondary vs Alabama receiver Davonte Smith, who had 104 yards receiving in the first half of last week’s victory over Auburn. LSU sophomore cornerback Derek Stingley Jr. will get the task. As a freshman last season, Stingley was All-America and widely seen entering this season as the best in the nation at his position. However, he has had an up-and-down 2020, hampered at times by illness and injury.

Alabama: QB Mac Jones could bolster his Heisman Trophy credentials with another big game. Jones has completed 76.2% of his passes this season for 2,728 yards and 23 touchdowns. His yards passing are the most by any Alabama quarterback through the first eight games of a season in Crimson Tide history.

Alabama coach Nick Saban missed last week’s Iron Bowl because he contracted COVID-19. He reported feeling better this week and appeared on track to return to the sideline in Tiger Stadium. ... Saban, who won a national championship at LSU, is also 10-5 in his career against LSU, including a 10-4 mark at Alabama. . ... Alabama has a four-game winning streak at Tiger Stadium dating to 2012 and is 28-9-2 against LSU in Baton Rouge since the series began in 1895. ... LSU head coach Ed Orgeron is 1-6 all-time against the Crimson Tide, including a 1-3 mark with LSU and 0-3 with Mississippi. ... LSU is playing its first home game in six weeks .... Since Orgeron took over on an interim basis four games into the 2016 season, the Tigers are 13-0 in games following a loss, including three such games this season. ___