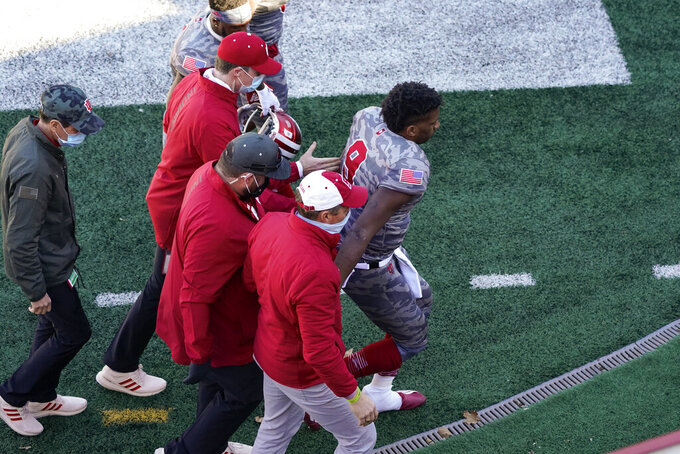 Indiana quarterback Michael Penix Jr. (9) is helped off the field after getting injured in the second half of an NCAA college football game against Maryland, Saturday, Nov. 28, 2020, in Bloomington, Ind. Indiana won 27-11. (AP Photo/Darron Cummings)

Even if that means spending the final month of the season working from the sideline. Again.

On Monday, Allen announced the Hoosiers starting quarterback suffered a season-ending torn anterior cruciate ligament, marking the second time in three years he's injured the right knee. Redshirt sophomore Jack Tuttle, who started his career at Utah, replaced Penix during Saturday's victory over Maryland and now steps into the leading role for one of the nation's most surprising teams.

“What do you say? It’s tough," Allen said. “It’s discouraging, it's disheartening when it first happens and then you have to fight. Michael has some big-time, long-term goals and it’s going to create more character and more resolve inside of him."

Penix did not take questions as he normally does Monday, but this is familiar ground for the Florida native.

As the backup to Peyton Ramsey in 2018, Penix suffered the same injury in his third college game. Last year, he beat out Ramsey for the starting job but played just six games before going down with an injured shoulder joint.

What's uncharted territory is how this injury could impact Indiana's national status.

The Hoosiers (5-1, No. 12 CFP) have been ranked for six consecutive weeks — one short of the school record — and moved up two spots in this week's rankings.

With a win Saturday at No. 18 Wisconsin or the following week against rival Purdue, Indiana would lock up the Big Ten East's No. 2 seed and a possible spot in the Dec. 19 conference championship game — if No. 3 Ohio State fails to meet the league's six-game requirement to be eligible for the title. Maryland canceled a Nov. 14 date against the Buckeyes because of a COVID-19 outbreak and last weekend Ohio State canceled its game at Illinois for the same reason.

Inside the locker room, the subject is off limits.

“We’re not going to discuss that as a team," Allen said. “There’s one focus, beat Wisconsin."

Indiana will be without one of its top playmakers, though. Penix leads the Big Ten in completions (124), yards passing (1,645) and touchdown passes (14) , is fourth in quarterback efficiency (138.5) and his four interceptions are the fewest among any QB with five or more starts.

Penix's breakout performance came two weeks ago at Ohio State when he was 27 of 51 with 491 yards, five touchdowns and one interception, leading the Hoosiers back from a 28-7 halftime deficit. Ohio State held on for a 42-35 victory, a game that turned Indiana doubters into believers — at least until Penix was chased out of bounds in the third quarter Saturday.

He stayed on the ground for several minutes as players walked down the sideline to gather around. When Penix finally did get up, he couldn't put any weight on the leg.

“It was a tough moment because as Michael went out of bounds, I didn’t think anything of it," Allen said. “Then I look up and they're taking him off the field."

The California native, who some recruiting services considered a top-five pro-style quarterback out of high school, transferred to Indiana in the spring of 2019 after never taking a snap for the Utes. He finished third, behind Penix in Ramsey in the Hoosiers quarterback derby that fall and appeared in just five games last season.

But Tuttle showed his mettle Saturday by finishing a touchdown drive on his second snap and hooking up with Peyton Hendershot for a 2-point conversion on his first pass. He helped seal the victory and Indiana's first back-to-back winning seasons in conference play since 1987-88.

“As soon as what happened happened, he put his helmet on took a few snaps and it seemed normal -- just like when Mike was in the game," offensive coordinator Nick Sheridan. “We’re excited for Jack, obviously, not the circumstances you want. He prepares hard, he works his tail off and when he came in the game, he was ready. So we have a lot confidence and faith in Jack."

Allen expects Penix to be right there cheering for Tuttle to bring home Indiana's first bowl win since 1991 and perhaps the third Big Ten title in school history.

“This is a football team and the other areas have to rise up when you lose a special player, and Michael is a special player," Allen said. “He will continue to be a leader on the sideline, in the film room and help in any way he can because that's who Michael is as a person."