No. 10 Notre Dame joins ACC race to unseat No. 1 Clemson 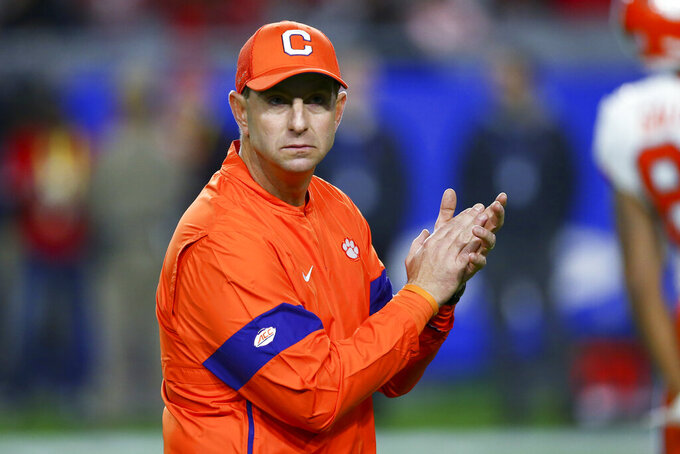 The goal has long been simple for football independent Notre Dame: win big against a coast-to-coast schedule and earn a shot to play for a national championship without having to be tied to a league.

Things have changed amid the coronavirus pandemic.

The 10th-ranked Fighting Irish's drive to reach this year's College Football Playoff will come as a member of the Atlantic Coast Conference, with the program giving up its cherished independence for the first time in the program's 133-year history in exchange for a guaranteed slate of games and a shot at ending top-ranked Clemson's five-year run as league champion.

“It's never been a part of our goals because this is the first time for us,” coach Brian Kelly said. “We didn't have a column on the goal chart, so we'd have to go back and redo it. Our players are excited though, quite honestly, that they get a chance to play for a championship — an ACC championship.”

Notre Dame has competed in all other ACC sports since the 2013-14 season. But it signed on for a run at the league football title game this December as the pandemic threw college sports into uncertainty, with games against Wisconsin, Stanford and Southern California canceled as the Big Ten and Pac-12 first went to league-only schedules before eventually passing on fall football altogether.

Notre Dame and the ACC reached an agreement for what might be merely a one-year cameo in the league's football standings. Instead of its annual batch of five or six games against ACC teams, Notre Dame would go all-in on the league's 10-game schedule while also sharing revenue from its own NBC TV deal with the ACC as part of the arrangement.

That added a new contender for the Tigers, who have gone 29-1 over the past two seasons while winning the 2018 national title before losing to LSU in last season's final.

Clemson and Notre Dame were already scheduled to meet Nov. 7 in South Bend, Indiana., before the Irish's move. That game could be a preview of the league championship game in Charlotte, North Carolina, in December.

“Obviously Notre Dame is an incredible program with a rich history and brand,” Tigers coach Dabo Swinney said. “For them to be all in is good for them and good for our league.”

Clemson: The Tigers have won 22 straight against league teams since losing at Syracuse in October 2017. Their past three ACC title-game victories have come by 35, 32 and 45 points.

North Carolina: Mack Brown turned things around quickly in Year 1 with the Tar Heels, who start this year at No. 18 with 10 returning offensive starters and have a big home date with Notre Dame (Nov. 27).

Trevor Lawrence, Clemson: The junior quarterback is a strong candidate for both the Heisman Trophy and to become the No. 1 overall NFL draft pick.

Travis Etienne, Clemson: The senior running back was last year's ACC player of the year after running for 1,614 yards and 19 touchdowns while averaging 7.8 carries.

Sam Howell, UNC: He threw a school-record 38 touchdown passes last year, the most by a true freshman in Bowl Subdivision history and fourth-most in the country.

The list also includes Wake Forest receiver Sage Surratt, who was one of the leading receivers in the power conferences last season before going down to injury.

NO COASTAL CHAOS THIS TIME

The league will is doing away with its two-division format this season.

The league has had Atlantic and Coastal divisions every year since expanding to 12 teams in 2005, with the Coastal seeing each of its seven teams win the division race over the past seven seasons.