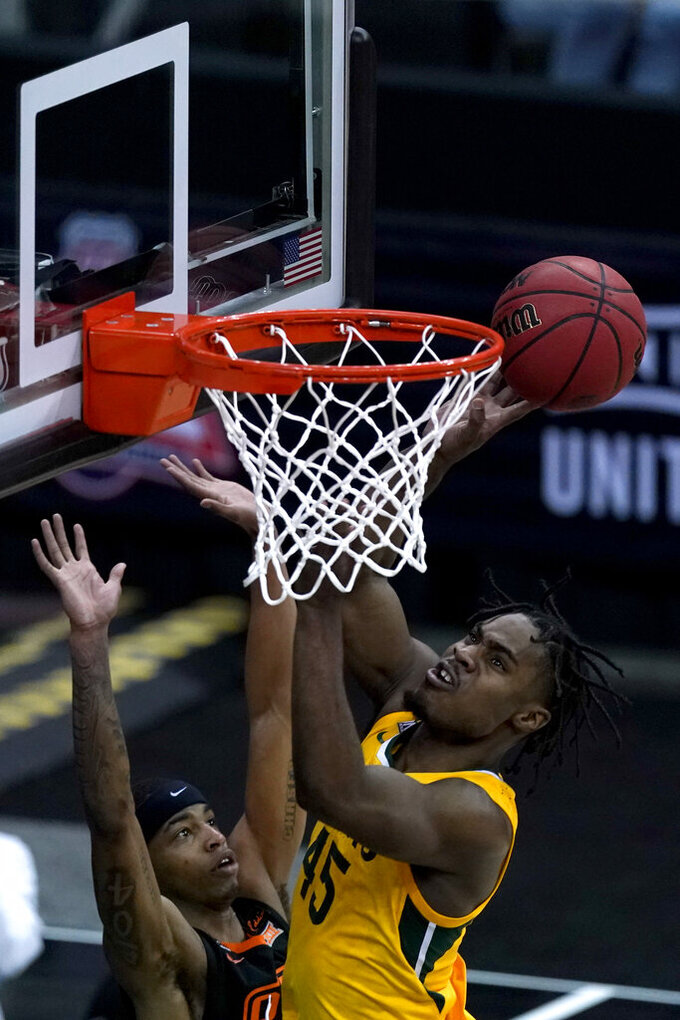 Baylor's Davion Mitchell (45) shoots over Oklahoma State's Avery Anderson III during the first half of an NCAA college basketball game in the semifinals of the Big 12 tournament in Kansas City, Mo., Friday, March 12, 2021. (AP Photo/Charlie Riedel) 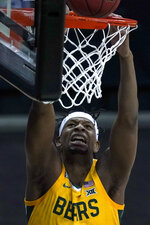 That came in handy Friday night.

With the No. 12 Cowboys trying to rally from a second-half hole against second-ranked Baylor in the Big 12 Tournament, Cunningham calmly responded with back-to-back 3-pointers to give his team the lead. Then, he stepped to the foul line and calmly made a series of free throws down the stretch that clinched an 83-74 victory in the semifinal round.

“I'm a confident player. I feel like every shot I shoot is supposed to go in,” said Cunningham, the projected No. 1 pick in the upcoming NBA draft. “I try to shoot them with confidence and make plays that my teammates need.”

His teammates didn't let him carry the load alone.

Avery Anderson III added 20 points, including the go-ahead three-point play with just over two minutes to go, and Rondel Walker had 11 as the No. 5 seed Cowboys (20-7) advanced to play No. 13 Texas for the title Saturday night.

The third-seeded Longhorns advanced earlier Friday when their semifinal against No. 11 Kansas was canceled because of a positive COVID-19 test that forced the Jayhawks to withdraw from the tournament. While the Cowboys have two Big 12 tourney titles to their credit, Texas has never won the event in six appearances in the finals.

The Bears have never won a conference tournament title, either — and won’t this year. They'll remain 0-3 in the Big 12 title game for at least another year after winning their first regular-season league championship since 1950.

MaCio Teague scored 17 points and Jared Butler had 16 for the Bears (22-2), who had won 10 of their last 11 against the Cowboys after sweeping them in the regular season. Davion Mitchell also had 13 points for coach Scott Drew's team.

“You have to give Oklahoma State a lot of credit," Drew said. “They made a lot of big-time plays.”

Top-seeded Baylor led 65-60 with just under six minutes to go when Cunningham hit back-to-back 3s to give Oklahoma State the lead. That began a back-and-forth affair until Anderson drove for a layup and was fouled by Baylor's Mark Vital with 2:09 to go. Anderson made the free throw to give the Cowboys a 73-72 lead, and they never trailed again.

“Nobody thought we would get to this point right now,” Cunningham said. “We have fun on the court, we compete — everybody wants to win. We want to prove everybody wrong.”

The Bears struggled coming out of a three-week pause for COVID-19, beating Iowa State and losing their only game at Kansas, before getting on track with three straight wins over ranked opponents leading up to the tournament.

That momentum disappeared in a sluggish 74-68 quarterfinal win over Kansas State.

It was still missing in the first half Friday night.

The Bears did get off to a quick start, but Oklahoma State answered and gradually pulled ahead. Anderson led the way, continuing his torrid postseason — he scored 17 points in a quarterfinal win over No. 10 West Virginia — by pouring in 13 first-half points. His buzzer-beating layup gave the Cowboys a 35-30 lead at the break.

Teague and the Bears started to heat up in the second half. The sharp-shooting senior hit a 3-pointer and jumper in quick succession, and then his putback off Butler's miss gave Baylor its biggest lead at 60-52 with 7 1/2 minutes to go.

Cunningham answered for the Cowboys, hitting back-to-back 3s a few minutes later as they regained the lead.

The teams swapped the lead four more times over the final four minutes before the Cowboys put it away.

“I don't want to say it like this, but we needed that loss in a way,” Baylor's Mark Vital said. “Everybody says that, but we do. We came here with the mindset we were already champions of the Big 12. We have to change our mindset to get back to being hungry. Now that we've been thrown, we have a chip on our shoulder. We have to come back from a loss.”

Oklahoma State improved to 3-0 against Baylor in the conference tournament, and the Cowboys did it by once again showing poise down the stretch. They improved to 15-4 in games decided by 10 points or fewer.

Baylor has been through a tough late-season stretch after its COVID-19 pause as it tried to squeeze in as many makeup games as possible. The Cowboys were their sixth ranked opponent in the last six games.

The Cowboys face Texas in the championship game. Oklahoma State split the season series with the Longhorns, losing a 77-74 nail-biter in December before winning a 75-67 double-overtime thriller early last month.