No. 13 Wisconsin to play at Michigan after canceling 2 games 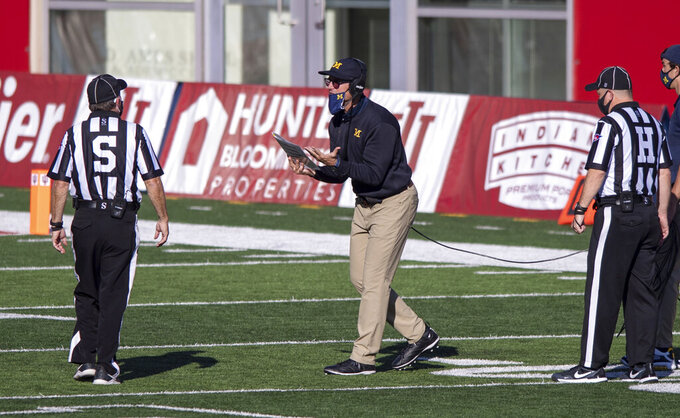 Michigan head coach Jim Harbaugh reacts towards a game official after a call during the second half of an NCAA college football game against Indiana, Saturday, Nov. 7, 2020, in Bloomington, Ind. Indiana won 38-21. (AP Photo/Doug McSchooler)

The 13th-ranked Badgers are set to play at Michigan on Saturday night, three weeks after their season-opening win.

Wisconsin has been idle because it canceled two games due to a COVID-19 outbreak within the program.

“It’s been kind of weird and sad a little bit, not being able to play," Badgers receiver Kendric Pryor said. “I don’t pay too much attention to the rankings, but I do look and see where we’re at each week."

The Badgers bounced back well enough with testing results that athletic director Barry Alvarez announced Monday the team would be back on the field against the Wolverines (1-2, 1-2), confident that the coronavirus outbreak has been handled.

As of last week, Wisconsin had 27 active COVID-19 cases involving 15 players and 12 staffers.

“That adversity is kind of affecting all teams," Pryor said. “It may have hit us a little bit harder than it hit other people, but it’s how you bounce back from it.”

Michigan has had plenty of adversity on the field, putting Jim Harbaugh in danger of having the first 1-3 team at the school since 1967.

To avoid that dubious distinction, Harbaugh has to lead the Wolverines to an upset victory for the first time. Harbaugh is 0-10 as an underdog, leading college football's winningest program.

“My expectation is to win this game,” Harbaugh said.

The Wolverines, who started the season No. 16, are unranked for the first time since the end of the 2017 season. That is also the last time they lost two straight games in the regular season.

“Being 1-2, you can tell there is pressure building on us," Michigan defensive end Taylor Upshaw acknowledged. “We have to perform the way we’re capable of performing."

Wisconsin quarterback Graham Mertz, who tested positive for COVID-19 on Oct. 24, according to the Milwaukee Journal-Sentinel, might play at Michigan.

“Continue to be hopeful of it,” Chryst said. “Whoever’s going to play, I feel good with it."

Against the Fighting Illini, the redshirt freshman became the third player in major college football over the last 25 years to throw for five-plus touchdowns and complete at least 95% of his passes in game.

The Wolverines will be without one of their best players, defensive end Aidan Hutchinson, who broke his leg in last week's loss at Indiana.

Upshaw, who has played sparingly since stepping on campus in 2018, sounds ready to take advantage of a chance to play more.

“I haven’t received the playing time that I would have wanted," Upshaw said. “Now, it’s a do-or-die situation so I’m happy I get to showcase my skills to the nation."

Wisconsin, with eight starters back on defense, held the Fighting Illini's offense scoreless and limited them to just 218 yards and eight first downs.

The inexperienced Wolverines defense gave up three touchdown passes to their last two opponents and allowed at least 323 yards passing in each setback, dropping them to 13th in the Big Ten and 104th in the nation against the pass.

Harbaugh has only one year left on his contract after this season, a point that has become a topic of conversation even though he wants no part of it. Some have suggested the former San Francisco 49ers coach will choose to leave and go back to the NFL, but he didn't want to make an attempt at quelling the speculation.

“I’ve been here almost six years and no matter what I say, something else is said or the same thing comes up.”

“The last couple of weeks have definitely been rough," Wisconsin linebacker Jack Sanborn said. “This kind of year, it seems like it’s kind of the normal."