No. 14 South Florida on pause due to coronavirus issues 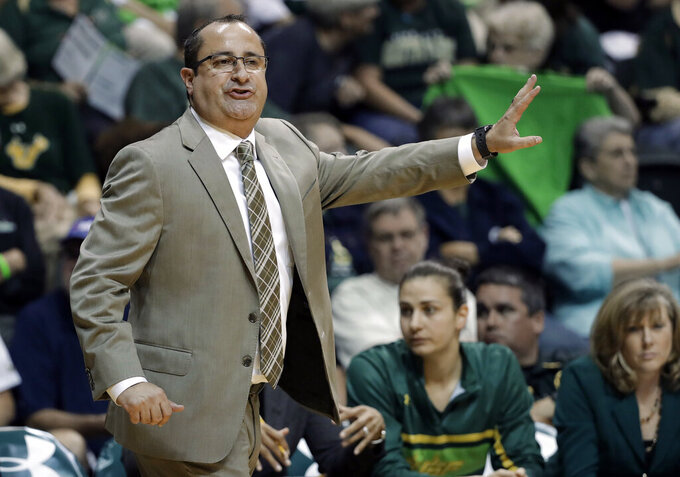 FILE - In this Feb. 27, 2017, file photo, South Florida coach Jose Fernandez calls a play during the first half of the team's NCAA college basketball game against Connecticut in Tampa, Fla. It's been a rough few weeks for Jose Fernandez and his South Florida team. The 14th-ranked Bulls were put on pause because of COVID-19 issues on Jan. 21, 2021 when a Tier I member in the women's basketball program tested positive. They've had other Tier I individuals test positive over the last two weeks, including one on Sunday, Monday and Tuesday. (AP Photo/Chris O'Meara, File)

It's been a rough few weeks for Jose Fernandez and his South Florida team.

The 14th-ranked Bulls were put on pause because of COVID-19 issues within the women's basketball program on Jan. 21. Since the initial positive test, they've had other individuals test positive over the last two weeks, including one on Sunday, Monday and Tuesday.

“I’m hoping we don’t have any more positive tests and we test out,” Fernandez said in a phone interview Wednesday. “When you bring your team back, you can’t just play a game since you’ve been off for so long. You’re risking soft tissue injuries if you come back right away.”

This pause came a few days after the Bulls were awarded a rare forfeit win over Memphis.

South Florida (10-1) was set to play Memphis on Jan. 17, but that game didn’t happen as the Tigers were unable to play because of non-COVID health reasons.

“We were going to play Memphis, it didn’t happen,” Fernandez said.

The American Athletic Conference later ruled that game to be a forfeit win for the Bulls that would count in conference standings only. Memphis declined to comment to the AP on why the Tigers wouldn’t play the game.

This was only the second time in the last 20 years that a regular season women’s basketball team was awarded a win this way, according to research provided by Stats Perform.

Strangely enough, another forfeit occurred a few days later when Illinois State was awarded a victory over Evansville on Jan. 22. The teams were supposed to play on Jan. 21 and 22. Evansville only had seven healthy players for the first game on Thursday night, which they lost by 25 points to the Redhawks.

The Purple Aces released a statement the next day confirming they were forfeiting the contest after consulting with medical professionals. They went on to play their next game five days later, beating Indiana State in overtime.

So, South Florida’s only game in the conference standings since Jan. 13 was the forfeit win over Memphis. That, along with Illinois State’s win will most likely be wiped off the record books by the conferences and declared no-contests after the season is over. That’s how the NCAA is considering them as far as their records go.

The NCAA has a rule that a forfeit can only be declared if both teams are present at a site and a game official declares the game a forfeit for a variety of reasons.

The only other regular-season forfeit in women’s basketball since 2003 occurred in 2011, when Bethune-Cookman forfeited a game against Hampton after the Wildcats were involved in a brawl in their previous game and didn’t have enough players to compete.

There have been no forfeits on the men’s side during the same time span.

The Bulls just want to play again. They haven't had a game since Jan. 13 and potentially won't be able to play again until Feb. 13 at the earliest because of quarantines. Fernandez said he had four players able to practice this week as the others were still in quarantine because of contact tracing.

“My biggest concern is making sure when we come back, everyone is safe,' Fernandez said. ”That’s the most important thing. Basketball, to me, is secondary."