No. 19 SMU, Tulsa to face off in high stakes AAC contest 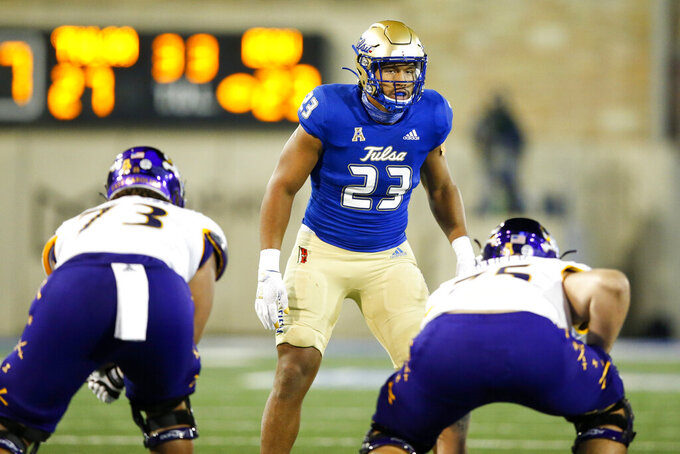 Tulsa coach Philip Montgomery won’t downplay what Saturday’s game against No. 19 SMU could do for his team.

With a win, the Golden Hurricane (3-1, 3-0 American Athletic Conference) would be positioned to make a run at a berth in the conference championship game and likely would crack the AP Top 25.

“I think it puts us in the drivers’ seat,” Montgomery said. “We definitely control where we’re headed and where we’re going. Another Top 25-type win opens a lot of different doors for you.”

SMU (7-1, 4-1) can’t afford to stumble, with Tulsa and Cincinnati entering the weekend unbeaten in league play.

Tulsa’s only loss this season was a close one against now No. 14 Oklahoma State. The Golden Hurricane got on the nation’s radar when they beat then-No. 11 Central Florida last month to end the Knights’ 21-game home win streak.

Gritty might not be enough on Saturday. SMU quarterback Shane Buechele leads the nation with 2.581 yards passing, and he’s ninth in yards passing per game.

“Shane is playing lights out,” Montgomery said. “He’s kind of the catalyst to it all. I mean his play -- he’s calm in the pocket. He uses his feet. He gets out of the pocket and makes plays that way, he’s pushing the ball down the field. One of the best deep throwers that I’ve seen in a really long time in terms of placement, accuracy, all of those things.”

Tulsa linebacker Zaven Collins has been named AAC Defensive Player of the Week twice, and he’s only played four games. The 6-foot-4, 260-pound junior had 10 tackles, 3 1/2 tackles for loss, two pass breakups against Central Florida and had an interception return for a touchdown and a forced fumble against South Florida.

“You look at their linebacker play -- 23 I think is probably as good a linebacker as there is in college football,” Dykes said. “There’s just nobody that’s his size and that strength who runs that well, has that kind of instincts and is that productive.”

The teams have split their past four matchups and each has won an overtime game. Neither has won by more than six points during that stretch. Last year, SMU won 43-37 in three overtimes.

“He’s so explosive,” Montgomery said. “You may have the hole actually covered up, and then all of a sudden he reverses field and bounces something outside and he’s making a big play.”

This is just the second home game of the season for Tulsa. The first came on Oct. 30 against East Carolina The Oklahoma State game was pushed back a week because Tulsa was short-handed. The Golden Hurricane were supposed to play Arkansas State on Sept. 26, but the Red Wolves couldn’t put a two-deep lineup together. Navy’s cases caused last Saturday’s scheduled game to be postponed.

The game against Cincinnati has been moved twice -- once for Cincinnati’s cases and once for television. The Arkansas State and Navy games have not been rescheduled.

“The games that we’ve been able to play — we’ve done a decent job in those,” Montgomery said. “Just haven’t played enough of them. Trying to figure out exactly where our team is.”