No. 2 Baylor heads to No. 15 Texas Tech for showdown 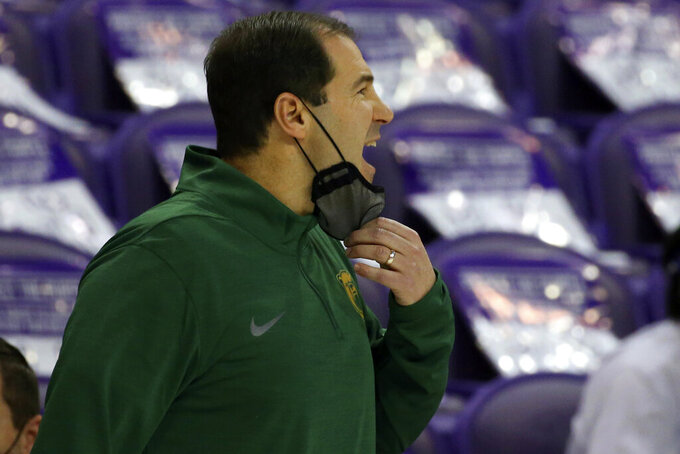 A look at the upcoming week around the Big 12 Conference:

Second-ranked Baylor tries to move to 12-0 overall and 5-0 in the league when the Bears visit No. 15 Texas Tech (10-3, 3-2) on Saturday. The Bears were supposed to play No. 13 West Virginia on Tuesday night, but COVID-19 issues within the Mountaineers' program forced the game to be postponed — the eighth time coach Scott Drew's team has had a game canceled or postponed this season. Baylor's game against the Red Raiders, who had a tough matchup with fourth-ranked Texas on Wednesday night, will be followed by a showdown with No. 6 Kansas on Monday night.

Iowa State visits the Jayhawks, Kansas State visits the Longhorns and Oklahoma plays Oklahoma State in the only other games Saturday; the Mountaineers' game against TCU also has been postponed, along with their date with the Cowboys next Tuesday. It's possible other games could be postponed, too — the Wildcats' game against the Cyclones on Wednesday night also was postponed because of COVID-19 testing within coach Bruce Weber's program.

Baylor guard Jared Butler stamped himself as the front-runner for Big 12 player of the year with his starring turn against TCU last weekend. The Bears trailed at halftime and little was going right, and Butler responded by hitting his first three 3-pointers of the second half and pouring in 13 points in just five shots. The junior nearly outscored TCU by himself over the final 20 minutes (21-16) and finished with 28 points, the third most of his career. Perhaps most importantly, it showed how resilient Butler can be after he was held to just eight points by Oklahoma in his previous game.

Baylor has won a school-record 11 straight games by double digits. ... Iowa State has faced five ranked teams within its first nine games, including four in the top 10. That's never happened in Cyclones history. ... Kansas forward David McCormack scored a season-high 24 points and pulled down 12 rebounds in Tuesday night's loss to Oklahoma State. ... The Cowboys held on to beat Kansas 75-70 despite allowing a 19-2 second-half run that wiped out a big lead. ... Oklahoma's De'Vion Harmon hit four 3s and scored 22 points in its win over TCU. The Sooners turned 16 turnovers into 25 points. ... Texas forward Andrew Jones hit the winning 3-pointer at West Virginia while joining the school's 1,000-point club last week. He was chosen the Big 12 player of the week. ... Texas Tech's Kevin McCullar matched a career high with 15 points and 11 rebounds against Iowa State for his first career double-double.

The sixth-ranked Lady Bears remain on pause after having their last three games canceled or postponed due to positive COVID-19 tests, including one from coach Kim Mulkey. They were due to face Iowa State on Saturday. ... Oklahoma State's Natasha Mack had 28 points, 17 rebounds and 10 blocks against TCU last week for the second triple-double in program history. She was the Big 12 player of the week. ... Oklahoma State improved to 5-0 in league play for the first time since 1992-93 with its 69-50 win over TCU. ... Iowa State guard Lexi Donarski hit seven 3-pointers and scored 25 points against Texas Tech. The Cyclones hit a school-record 19 shots from behind the arc. ... Kansas was scheduled to face Texas on Thursday night after its first four Big 12 games of 2021 were postponed. ... All eight of Texas's wins this season have come by double-digits. ... Kysre Gondrezick scored a team-high 24 points and Esmery Martinez had 19 points and 10 boards for her fifth straight double-double in West Virginia's win over Texas.