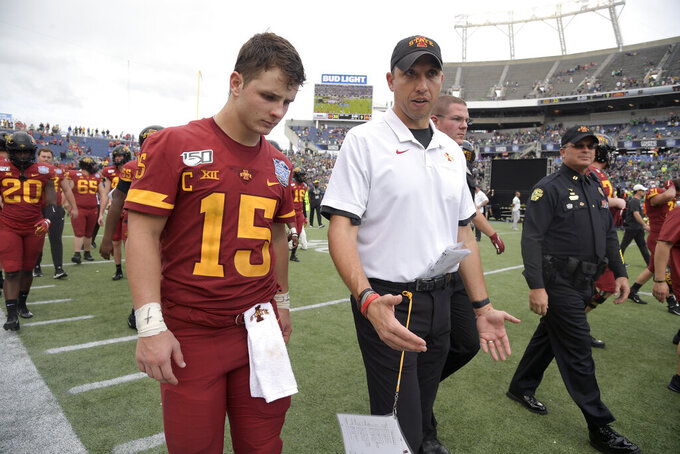 For the first time since 2012, Iowa State will open its season against an opponent from the Football Bowl Subdivision.

The Cyclones originally were set to ease into the season against South Dakota of the FCS. But the coronavirus pandemic caused postponements and cancellations across college football, and the Cyclones had to scramble to line up Louisiana-Lafayette for Saturday.

Coach Matt Campbell hopes the Cyclones don't get more than they bargained for in a “buy” game that will net the Ragin' Cajuns $350,000 for visiting Jack Trice Stadium.

“I felt like our execution has been crisp and sharp through the entirety of fall camp,” Campbell said. “Are we going to get out and tackle well? Are we going to take care of the football? Those are things that are going to be critical when you’re talking about two teams that are really even across the board.”

Brock Purdy will begin his second full season as starting quarterback after leading the Cyclones to one of their best offensive years in program history. The owner of 21 school records threw for almost 4,000 yards and 27 touchdowns, and his 306.3 yards per game ranked fourth nationally.

The Cajuns have won two straight Sun Belt West titles and, at 11-3 overall and 7-1 in the conference, are coming off the best season in program history. They're entering their third season under Billy Napier.

The matchup wasn't announced until Aug. 12.

“There's a little bit different feel in the air this week," Napier said. "Lots of us were uncertain whether this was ever going to happen. We're excited about the opportunity to compete and proud of our young men and the work they've put in to getting prepared for this moment.”

No fans will be allowed in the stadium as a precaution against coronavirus spread.

“I don't really know what the environment is going to be like," tight end Dylan Soehner said. “I'd assume it will be somewhat of a really intense practice feel. We don't have to do anything special to prepare for that. We always make a joke that we could show up and play on the side of the highway, and that's basically what we're doing.”

Iowa State will wear a uniform patch honoring Trice, the school's first Black athlete who died from injuries suffered in his second football game in 1923. Trice is the first Black man to have a stadium named in his honor.

DON'T SLEEP ON THEM

The Cyclones have had a knack for playing opponents close. Since 2017, they've been beaten by more than two touchdowns just once, and Purdy has led four fourth-quarter comeback wins the last two seasons.

Lafayette assistant coach D.J. Looney died from a heart attack following a team workout Aug. 1, and the team's practice schedule was disrupted at the end of the month because of a hurricane.

Looney, who was 31, was entering his third season on the staff and coached the offensive line along with offensive coordinator Rob Sale.

Hurricane Laura forced the closure of the campus for two days and required the practice schedule to be adjusted. Lafayette players and staff members participated in a blood drive and delivered food and water to hurricane victims in Lake Charles, 75 miles west of Lafayette.

TAKING A STEP UP