No. 25 Arizona State at Cal highlights Pac-12 this week 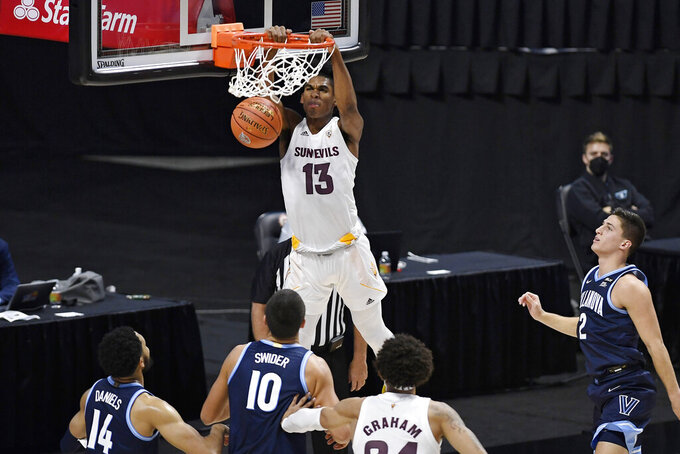 A look at things to watch this week in Pac-12 Conference basketball:

GAME OF THE WEEK: No. 25 Arizona State at California, Thursday. The Sun Devils opened the season at No. 18 in the preseason AP Top 25 and dropped seven spots this week after opening 2-1. Arizona State beat Rhode Island in Connecticut in its opener, but lost by nine to No. 12 Villanova. The Sun Devils beat Houston Baptist 100-77 on Sunday, but coach Bobby Hurley wasn't happy with the way they finished after building a lead of more than 40 points. The Bears opened with an eight-point loss to Oregon State after having their opener canceled due to the coronavirus, but bounced back with easy wins over Northwest and Nicholls State. Junior guard Matt Bradley has picked up where he left off last season, averaging 19.3 points and 5.7 rebounds per game.

LOOKING AHEAD: The Pac-12 already had one game postponed this week due to COVID-19. Arizona's home game against Colorado was pushed back to a later date due to positive tests within the Buffaloes' program. ... Oregon State and Washington State, two teams picked to finish near the bottom of the Pac-12, play on Wednesday. ... The only other Pac-12 game this week is Washington at Utah on Thursday. The Utes are playing for the first time this season after having their opener against New Orleans canceled due to positive COVID-19 tests.

INSIDE THE NUMBERS: Colorado senior guard McKinley Wright IV won his third Pac-12 player of the week honor last week, tying Askia Booker for most by a Buffaloes player since the team joined the conference in 2011-12. He averaged 22 points, 5 assists and 4 rebounds in a pair of wins. ... UCLA, which split its first two games, has five players averaging double-figure scoring. Chris Smith leads the way at 18 points per game.

PLAYER TO WATCH: Josh Christopher, Arizona State. Christopher arrived in the desert as the highest-rated recruit in Arizona State history (No. 12 in the 247Sports composite) and has lived up to the billing so far. The freshman was named Pac-12 player of the week after averaging 18.7 points and shooting 58% in three games last week.

ON THE WOMEN’S SIDE: No. 7 Arizona has a tough opening week to Pac-12 play, hosting No. 9 UCLA on Friday and USC on Sunday. The Wildcats opened the season with a 76-63 win over Northern Arizona. The Bruins have the difficult task of playing at Arizona State on Sunday, two days after playing Arizona. ... No. 2 Stanford hosts the conference's two Washington schools after having games against Pacific and San Diego canceled due to coronavirus issues. ... No. 10 Oregon hosts Colorado and Utah this weekend.