No. 25 Memphis at SMU for 1st game in month post-COVID cases 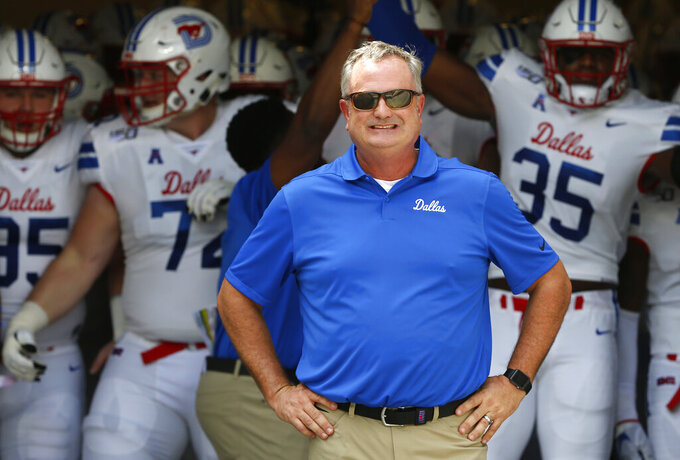 DALLAS (AP) — Memphis coach Ryan Silverfield finally sensed his No. 25 Tigers getting comfortable again after going 10 days without practicing and not playing two scheduled games because of active COVID-19 cases inside the program.

They hope to finally play their first game in nearly a month Saturday with their American Athletic Conference opener at SMU (3-0).

“Obviously excited to, hopefully, be playing a game,” Silverfield said. “Keep our fingers crossed for negative results on those tests.”

The Tigers haven't played since winning its opener against Arkansas State on Sept. 5, which was followed by a virus outbreak for Memphis, though it was never specified how many cases were positive tests and how many were the result of contact tracing. The school has said the outbreak was primarily linked to social events outside of official football activities.

Silverfield said this week his team was heading in the right direction and getting healthier, and that he expected to have the majority of his players back for the trip to Dallas.

“We do feel like we’re over about the massive moment that we had to overcome that’s occurred the last few weeks,” he said.

Because of the four-week gap between games, it feels almost like another season opener.

“It's like you reload and you're about to start your season again almost,” Memphis senior quarterback Brady White said. “It feels kind of weird. ... We've been preparing for it, and it’s good to know that it’s happening.”

SMU is one of only two AAC teams to play three games in September, though it had a game at TCU called off because of a virus outbreak among the Horned Frogs.

Asked what he thought about his Mustangs after a month, coach Sonny Dykes said the biggest thing is that they were still playing.

“That was one of the three things that we wanted to try to achieve really from the very beginning. No. 1, let’s stay safe and sound. No. 2, let’s try to play as many games as we can and try to be ready to play every week,” Dykes said. “And then No. 3, let’s try to win some of those games. And so that’s been our approach really from the very beginning.”

SMU is 3-0 in consecutive seasons for the first time since 1983-84. The Mustangs were 8-0 last year before a 54-48 loss at Memphis, a game that was showcased by ESPN’s “College Gameday” and played in a sold-out Liberty Bowl.

“We know it’s become a rivalry,” Silverfield said. “Obviously, we think about the excitement of last year’s game. But we don’t talk much about what happened in the past. They’ll come ready to play, and I know our guys will be excited.”

The two former graduate transfer quarterbacks who are both back this season combined for 806 yards passing without an interception in the game last November — SMU's Shane Buechele had 456 yards and White put up 350.

White, who went to Memphis from Arizona State, was the nation’s only 4,000-yard FBS passer last year, when former Texas Longhorns QB Buechele had 3,929 yards and 34 TDs. White had 280 yards and four TDs in his only game this season. Buechele has thrown for 852 yards and seven TDs in three games.

Memphis was supposed to have played its league opener against Houston and go to San Antonio by now. The Houston game was rescheduled this week for Dec. 5, and the Tigers' canceled game at UTSA has been replaced by a home game against Stephen F. Austin on Nov. 21, which was an open date.

“Our season is still in front of us,” White said. “That's just part of the adversity of this entire year everyone's dealing with.”

Both teams are set for 11-game schedules, though SMU has sought a 12th to replace the TCU game.

“There’s been a couple of leads that didn’t work out,” Dykes said. "We’re still trying to get a 12th and just trying to keep all our options open at this point.”

NOT TOO CROWDED SELLOUT

SMU is limiting tickets to about 25% capacity for its game at 32,000-seat Gerald J. Ford Stadium. The Mustangs announced a sellout attendance of 7,898 for its game last week against Stephen F. Austin.