No. 3 Michigan returns to action Sunday at No. 21 Wisconsin 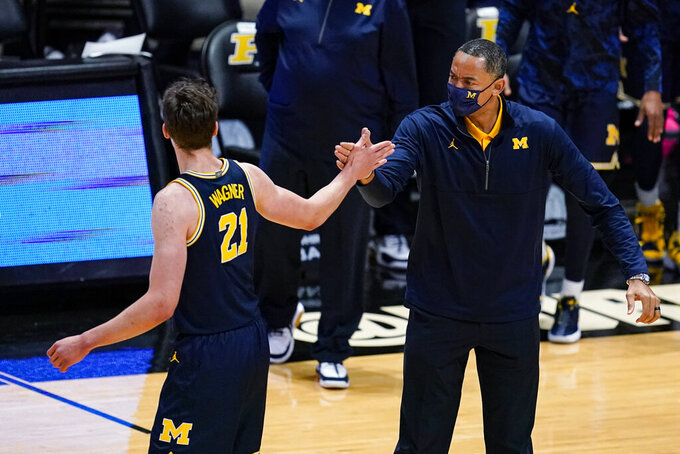 GAME OF THE WEEKEND: No. 3 Michigan at No. 21 Wisconsin, Sunday: Assuming this game takes place as scheduled, it would mark Michigan’s first game in three weeks. Michigan put all athletic activities on pause after receiving several positive tests for a COVID-19 variant that transmits at a higher rate. The Wolverines' last game was a 70-53 victory at Purdue on Jan. 22. Michigan leads the Big Ten standings and is chasing a No. 1 seed in the NCAA Tournament. But, how rusty will the Wolverines be after such a long delay? Wisconsin has been sliding down the Top 25 the last few weeks and lost 77-54 at Michigan on Jan. 12.

PLAYER TO WATCH: Illinois guard Ayo Dosunmu recorded the third triple-double in school history – and first since 2001 – in a 75-60 victory over Wisconsin on Saturday. The 6-foot-5 junior collected 21 points, 12 rebounds and 12 assists in that game. Dosunmu is averaging 21.2 points, 6.4 rebounds and 5 assists this season. The last Big Ten player to average at least 20 points, six rebounds and five assists over the course of a season was Ohio State’s Evan Turner in 2009-10.

ON THE WOMEN’S SIDE: Brenda Frese owns a 499-130 record in 19 seasons at Maryland to match the school record for career wins set by her predecessor, Chris Weller (499-286 from 1975-2002). Frese can move into sole possession of first place when the ninth-ranked Terrapins visit Nebraska on Sunday. … Rutgers’ 78-62 victory over Nebraska was the Scarlet Knights’ first game since Jan. 3. … Indiana’s Grace Berger collected her third triple-double of the season to tie a Big Ten record Wednesday as the 15th-ranked Hoosiers beat Penn State 90-65. Berger had 17 points, 11 rebounds and 10 assists. The only other Big Ten player ever to have three triple-doubles in a season was Iowa's Samantha Logic in 2014-15.