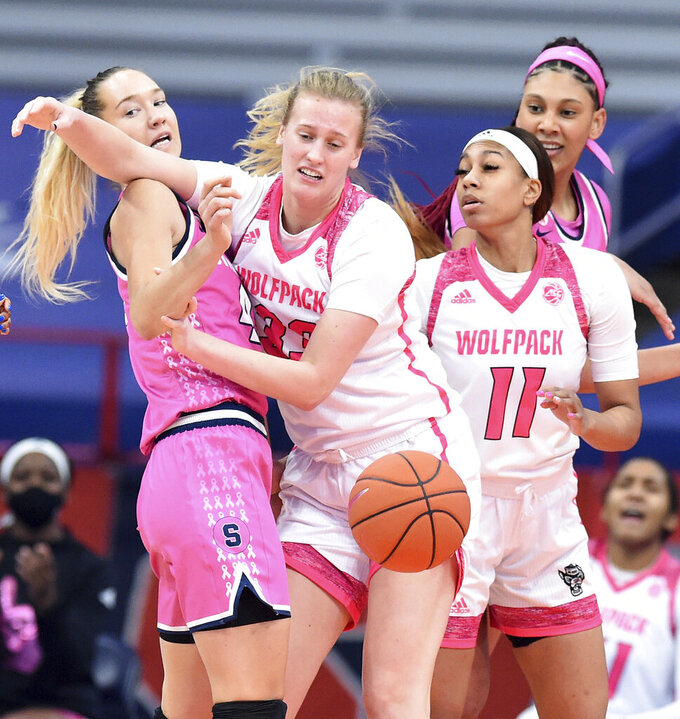 Yet as the ACC Tournament opens this week, the Cardinals and not the Wolfpack hold the No. 1 seed. It’s a byproduct of scheduling challenges from playing a season amid the COVID-19 pandemic, which led the league to sort standings on win percentage with teams playing different numbers of games amid postponements and cancellations.

Regardless of the order, the two are the headliners in a tournament with no other ranked teams and multiple programs still trying to improve NCAA Tournament chances.

“Somebody said, ‘Well, does that put more pressure because you won it last year?’ I don’t really think so,” Moore said. “In fact, I think it could work in the reverse: at least we know we can do it..”

Jeff Walz’s Cardinals claimed the top seed for the third time in four seasons and has won at least a share of the regular-season crown in all four of those years. Louisville is chasing the program’s second tournament title, the other coming in 2018.

Some other things to know about this week’s ACC Tournament in Greensboro, North Carolina:

Third-seeded Georgia Tech opens play in Friday’s last of four quarterfinals after a strong second regular season under Nell Fortner. The Yellow Jackets (14-7, 12-6) tied a program record for league wins to finish as the top team behind the Cardinals and Wolfpack.

“I don’t think anybody looks at going into this weekend that there’s a big gap,” Fortner said.

Fourth-seeded Florida State (10-7, 9-7) is playing under interim coach Brooke Wyckoff, who has led the program while longtime coach Sue Semrau stepped away before the season to care for her mother as she recovered from ovarian cancer.

“We’re in contact quite a bit but … to her credit, she has given me so much space just to be me and to lead this program the way I feel it needs to be led,” Wyckoff said of Semrau.

ESPN’s latest projections have the league with eight NCAA teams entering the week, including No. 5 seed Syracuse, No. 6 seed Notre Dame, No. 7 seed Virginia Tech and No. 8 seed North Carolina.

The Tar Heels (13-9, 8-9, No. 32 NET) have won five of six to solidify their standing under second-year coach Courtney Banghart. They open against ninth-seeded Wake Forest (No. 51 NET), which is on the bubble in pursuing its second-ever NCAA bid.

Tenth-seeded Miami (No. 72 NET) is also trying to stay alive for a bid.

This will be the first postseason tournament as a head coach for Notre Dame’s Niele Ivey, who took over for Muffet McGraw after last season. But Ivey knows the ACC Tournament well after working as an assistant under McGraw for the Fighting Irish's move into the ACC for the 2013-14 season.

The ACC Tournament has just 13 teams after Duke and Virginia opted not to continue their seasons. That has reduced the number of games in Wednesday’s first round to one, matching 12th-seeded Pittsburgh and 13th-seeded Boston College.

The tournament will also have limited fans after Gov. Roy Cooper eased public-gathering restrictions last week, permitting indoor venues of more than 5,000 to admit up to 15% of capacity.