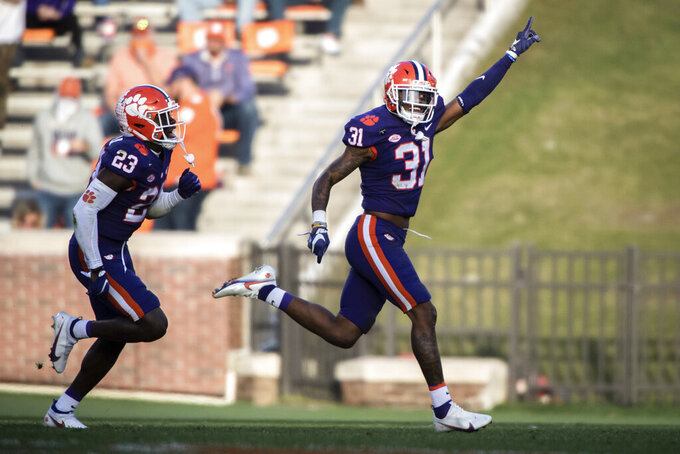 Clemson cornerback Mario Goodrich (31) celebrates after making an interception during the first half of an NCAA college football game against Pittsburgh Saturday, Nov. 28, 2020, in Clemson, S.C. (Ken Ruinard/The Independent-Mail via AP, Pool)

CLEMSON, S.C. (AP) — Trevor Lawrence has stuck to his plan throughout his time at Clemson — and if this is his final game at Death Valley, he couldn't come up with a more perfect end.

Lawrence threw for 403 yards and two touchdowns in his first game in five weeks to lead the fourth-ranked Tigers to a 52-17 victory over Pittsburgh in what's likely to be his last home game.

The junior passer said before the season he hoped to play, graduate in December and then enter the NFL draft, where he's widely expected to be taken No. 1 overall.

“Yeah, that's kind of been the plan going into the season,” Lawrence said. “You just never know. If it is, it was a fun one for sure.”

Lawrence hadn't seen the field on game day since beating Syracuse on Oct. 24. He tested positive for the coronavirus the following week and missed Clemson's next two games, including its only loss this season — a 47-40 double OT defeat at No. 2 Notre Dame.

A healthy, eager Lawrence expected to play last week, but a positive test from a Clemson offensive lineman on the Friday before the game led to a postponement at Florida State just hours before kickoff.

Lawrence, a 6-foot-6 junior with a powerful arm, deft touch and flowing hair, was as crisp as ever in leading Clemson (8-1, 7-1 Atlantic Coast Conference; No. 3 CFP) a step closer to the league championship game and a likely rematch with the unbeaten Fighting Irish.

Cornell Powell had five catches for 176 yards, including a 43-yard TD catch off a flea-flicker pass from Lawrence. Powell also had an incredible, one-handed grab on a 70-yard pass to the Pitt 5 that set up Chez Mellusi's 2-yard TD run for a 38-3 lead.

Lawrence opened the scoring with a 5-yard touchdown pass to freshman E.J. Williams less than four minutes in. By the time reserve runner Lyn-J Dixon burst through for a 1-yard touchdown with 5 seconds left in the first quarter, the Tigers led 31-0 — the most points they had ever scored in the opening period.

“They’ve been playing football here for 125 years," Clemson coach Dabo Swinney said. "It’s hard to do things that haven’t been done here, but this team just keeps on finding ways to do that.”

The Panthers (5-5, 4-5) were the last team to win at Clemson, 43-42 in 2016. But Pittsburgh quarterback Kenny Pickett threw four interceptions, three in the first eight minutes that all led to Clemson touchdowns, and the Panthers could not recover as the Tigers won their 28th straight at home.

Lawrence finished 26-of-37 passing and improved to 32-1 as a starter. He got a huge cheer from the crowd, limited to 18,819 due to coronavirus restrictions, when he took a solo run down Clemson's hill for those playing their final games at Memorial Stadium.

Lawrence thanked fans for his time at Clemson, then stopped short afterwards of going all-in on the NFL.

Pickett passed for 209 yards and two touchdowns along with those four interceptions. The Panthers managed just 16 yards rushing, a season low.

Pittsburgh coach Pat Narduzzi said his team's mistakes cost them early and put them in a difficult situation in getting down to the talented Tigers.

“And Trevor Lawrence with that cannon arm,” Narduzzi said. “I've never seen a guy throw a ball that far” as on the long pass to Powell.

Pittsburgh: The Panthers came in with the ACC's third-best defense in yards allowed, but Clemson had surpassed that figure (311) with 349 yards by halftime and finished allowing their most yards this season with 581.

Clemson: The Tigers played with a fire likely from losing at Notre Dame three weeks ago and missing the chance to recover a week ago with the Florida State postponement. Once Clemson opened a big first-quarter lead, it had trouble finding its offensive rhythm the rest of the way. The Tigers will need more consistency with bigger games ahead.

Powell has had three straight games with 100 or more receiving yards and two in row with 150 or more, joining DeAndre Hopkins and Sammy Watkins as the only Clemson players to accomplish that. Powell smiled when asked about his one-handed catch. “I expect to make plays like that,” the senior said. “I expect to dominate.”

Clemson coach Dabo Swinney said he hasn't heard anything more about when, where or whether last week's postponed game at Florida State might be made up. Swinney said his team didn't have any positive COVID-19 tests this week after last Saturday's game was halted.

Pittsburgh finishes its regular season at Georgia Tech on Dec. 10.