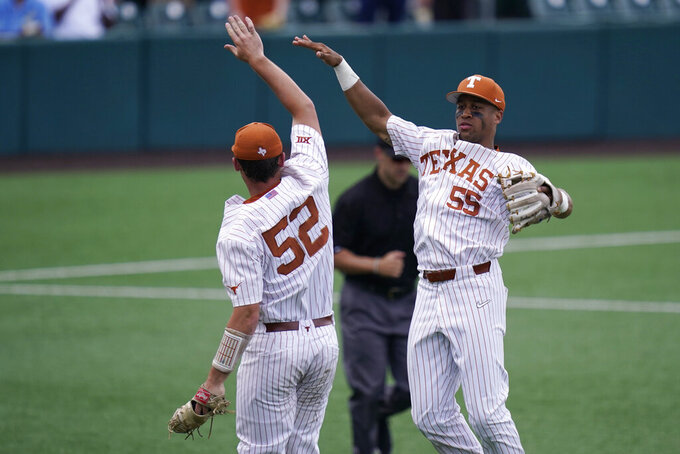 South Florida posted the biggest upset on the first day of the NCAA baseball tournament, knocking off the Florida Gators as the bottom seed in the Gainesville Regional.

Four of the seven No. 3 regional seeds that played early Friday also won. But no game more than the Bulls' 5-3 win over Florida portended surprises sure to come in a year when fallout from the COVID-19 pandemic made it difficult for the Division I Baseball Committee to evaluate teams and set up the bracket.

The Bulls ended the regular season 24-26 after being picked last in the American Athletic Conference, and they had to win their league tournament to get into the NCAAs.

But Florida (39-20), which also lost its regional opener in 2019, couldn't sustain any offense against four USF pitchers. The Bulls (29-27) have won seven of their last eight.

“We're definitely playing well at the right time,” catcher Jake Sullivan said. “What we're doing more than anything is playing for each other. We're not worried about who's on the other side of the field, who's in the stands, where we're playing.”

It was the second straight NCAA Tournament that opened with a No. 4 regional seed from the American Athletic Conference winning its opener. Cincinnati beat Oregon State in 2019. There was no tournament in 2020 because of the pandemic.

Arkansas (47-10) and Texas (43-15), the top two national seeds, won their openers in the double-elimination regionals. The Razorbacks erased an early three-run deficit and beat NJIT 13-8. The Longhorns won 11-0 over Southern.

The No. 3 regional seeds to win were Liberty, Dallas Baptist, Florida State and UC Santa Barbara.

Brady Gulakowski homered twice and drove in six runs as Liberty beat ACC tournament champion Duke 11-6. The Flames, who had lost 5-4 and 7-0 to the Blue Devils in the regular season, ended Duke's 12-game win streak.

Four Florida State pitchers combined to surrender no earned runs in a 5-2 win over Southern Mississippi. Marcos Castanon went 5 for 6 with a homer and five RBIs in a 14-4 win over Oklahoma State.

East Carolina's Thomas Francisco was front and center for one of the nation's most creative home run celebrations after his three-run shot gave his team the lead over Norfolk State in an 8-5 win.

As has been the practice for all East Carolina home run hitters all season, teammates put an orange traffic cone over Francisco's head upon his return to the dugout. The cone, found in a mudroom in the team's baseball facility, has a hole cut into it so the wearer can see. It's known as the “Birdhouse,” perhaps because of its triangular shape.

Christian Franklin righted Arkansas after a rocky start against NJIT.

With his team down 3-2 in the fourth and runners on first and second with two outs, the center fielder made a long run to take away a gapper that would have produced at least one run. Franklin led off the seven-run fifth with the first of the Razorbacks' three homers in the inning.

— Duke's Peter Matt went 4 for 5 with two homers and a double.

— Stanford's Alex Williams pitched seven innings and combined with two relievers to limit North Dakota State to four hits and one walk and strike out 11 in a 9-1 win.