No. 6 Cincinnati and No. 20 Tulsa meet at last for AAC title 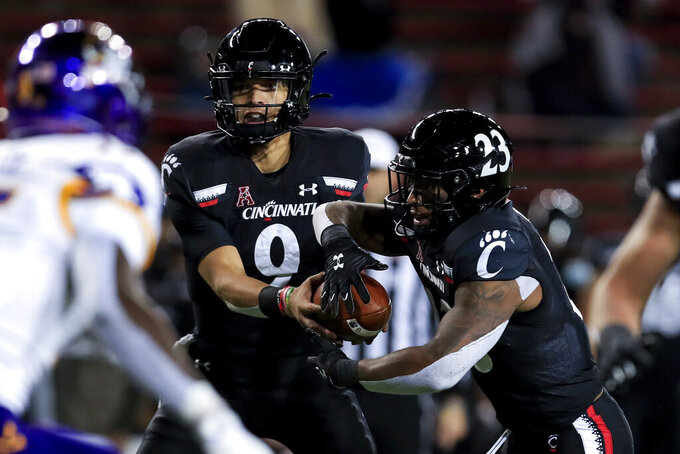 Cincinnati quarterback Desmond Ridder hands off the ball to running back Gerrid Doaks, right, during the first half of the team's NCAA college football game against East Carolina, Friday, Nov. 13, 2020, in Cincinnati. (AP Photo/Aaron Doster)

CINCINNATI (AP) — After four previous attempts, Cincinnati and Tulsa are finally going to play each other, and this time it’s for the American Athletic Conference championship.

Tulsa and Cincinnati were scheduled to play on Oct. 17, but the game was moved to Dec. 5 due to COVID-19 cases in the Bearcats program. The game was moved back to Dec. 4 for television, then rescheduled again for Dec. 12, before being canceled altogether last week due to more COVID issues at Cincinnati.

Cincinnati hasn’t played in a month. The Bearcats once had hopes of easing into the College Football Playoff, but they'll likely have to be satisfied with an undefeated season and a choice bowl game if they can win Saturday.

“This entire season has been such a whirlwind,” Cincinnati coach Luke Fickell said. “We wanted to get a season in and an opportunity to play for a championship.”

If this game is canceled, the Bearcats would be crowned AAC champion for New Year’s Six bowl consideration because they are the higher-ranked team.

“I think all of our team now, for the most part, is back off of the protocols for a lot of things,” Fickell said. “Hopefully, by (game time) we’ll be in good shape with just about everybody.”

Tulsa has won six straight games since losing 16-7 to then-No. 11 Oklahoma State in the season-opener.

“They are battle-tested,” Fickell said.

“Our team has done a really good job of staying focused and putting our concentration on what we can control,” Montgomery said. “We’ve got to understand that we are playing for a championship. We want to funnel that emotion into something that’s productive.”

Despite not playing a game, Cincinnati dropped from No. 7 to No. 9 in the College Football Playoff rankings over the past two weeks. Fickell said his team’s primary goal has always been to win an AAC championship because that’s something they can control, but he’s not immune to the playoff hype. “I can’t lie and say I don’t care about it,” he said. “We use it in recruiting. There are a lot of things that rise or drop my blood pressure. That’s not one of them."

FOR THE TROPHY CASE

Cincinnati had 17 players earn all-AAC honors this season, including quarterback Desmond Ridder, who was named offensive player of the year. Fickell was named coach of the year. The 17 all-conference selections are the most in the AAC this year. Eight Bearcats players earned first-team honors, also a school record.

Coming off three straight losing seasons, including a 2-10 campaign in 2017, Tulsa has reversed the fortunes of its program under Montgomery. “This team has been resilient," he said. "I saw our team continuing to make strides to get better. We were really close in a lot of games the last couple of years. But now we’ve turned that into wins.”

Tulsa would have played Saturday’s championship game at home if they had beaten Cincinnati in the canceled regular-season finale. Cincinnati was awarded a home game for the championship because it is ranked higher in the CFP. The Bearcats have won 19 straight games at Nippert Stadium. More than 5,800 fans will be permitted to attend after the school got a variance from the state of Ohio.