No. 9 Indiana tries to measure up against No. 3 Ohio State 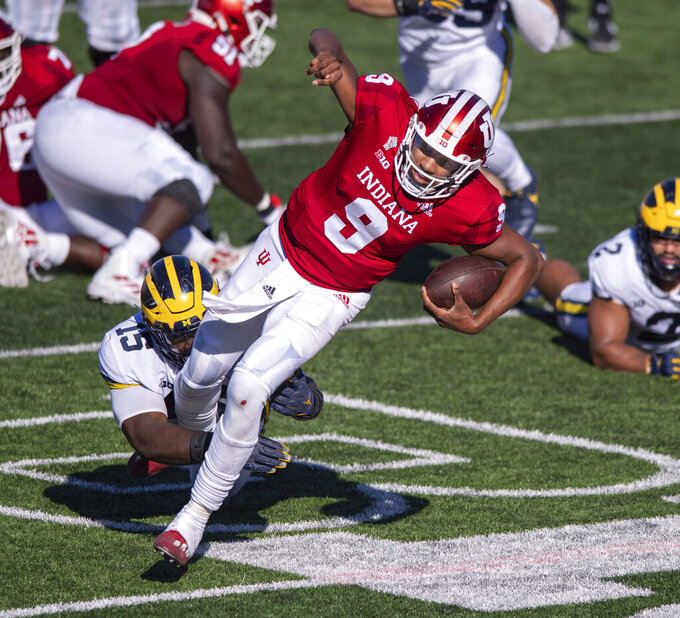 Indiana quarterback Michael Penix Jr. (9) is tripped up by Michigan defensive lineman Christopher Hinton (15) as he runs the ball out of the backfield during the second half of an NCAA college football game Saturday, Nov. 7, 2020, in Bloomington, Ind. Indiana won 38-21. (AP Photo/Doug McSchooler)

COLUMBUS, Ohio (AP) — Back when the schedule was assembled, a mid-November game between perennial power Ohio State and middling Indiana looked like a snoozer, an easy win for the talented Buckeyes.

But it's 2020, right? Lots of things are strange and different.

Turns out Saturday's Big Ten game in the empty Horseshoe will be a clash of AP Top 10 teams, with the undefeated No. 9 Hoosiers emerging as one of the best conference squads No. 3 Ohio State could see this season.

The winner will have the upper hand in the Big Ten East and the chance to play for the conference title. That would be a big deal for Indiana, which hasn't even sniffed a conference crown since it shared one with two other teams in 1967.

A loss for the Buckeyes (3-0) — whose game last week was canceled because of a COVID-19 outbreak at Maryland — almost certainly would be fatal to their national championship hopes.

Indiana (4-0) is winning behind quarterback Michael Penix Jr. He leads the Big Ten in passing yards with 1,070, and his nine touchdowns are just one away from his total for all of last year and two behind Ohio State's Justin Fields, the conference leader.

Penix has thrown for more than 300 yards in each of the past two games, decisive wins over Michigan (1-3) and Michigan State (1-3). The Hoosiers beat Penn State (0-4) in overtime in their opener, and Rutgers (1-3) the following week.

The matchup with three-touchdown favorite Ohio State should give the Hoosiers a better idea of whether they can run with the big dogs.

Ohio State coach Ryan Day insisted Indiana’s hot start this year wasn’t entirely unpredictable, noting the Hoosiers were improving under coach Tom Allen and have gotten a jolt from the dynamic play of Penix, a redshirt sophomore who was on the bench for unspecified reasons in Ohio State’s 51-10 win last season in Bloomington.

It’s already been a historic season for the Hoosiers. The win over No. 8 Penn State was Indiana’s first over a top-10 foe since 1987. They ended a 24-game losing streak to Michigan and handed Michigan State its first shutout loss at home since 1985. A win this week will snap a 24-game skid against Ohio State.

In its last game Nov. 7, Ohio State built up a 35-3 halftime lead over five-touchdown underdog Rutgers and then backed off the gas and prepared to start putting in backups. Except Rutgers wasn’t cooperating. The Scarlet Knights outgained and outscored the Buckeyes 24-14 the rest of the way, and the 49-27 Ohio State win was a little too close for Day’s comfort. He said he thought playing at night in a nearly empty, energy-deprived stadium may have contributed.

Fields lit up Rutgers to keep alive his status as a Heisman Trophy frontrunner after being a finalist last year. He was 24 of 28 for 314 yards and five touchdowns and he rushed for another score. Fields, likely to be a first-round pick in the NFL draft next spring, is completing nearly 87% of his passes while averaging more than 300 yards per game. He has thrown the same number of touchdowns as incomplete passes — 11 — and has zero interceptions.

Hoosiers receiver Ty Fryfogle has been a busy man. He set career highs each of the past two weeks, catching seven passes for 142 yards and one TD -- all in the first half -- against Michigan. Against Michigan State, he was even better — 11 catches for 200 yards and a pair of TDs.

Ohio State has allowed a few hundred family and friends in the stands for the first two games. That won't be the case Saturday. The 105,000-capacity stadium will be empty because of a significant spike in COVID-19 cases in Ohio.