No Beal, Wall or Bertans for long-shot Wizards in NBA return 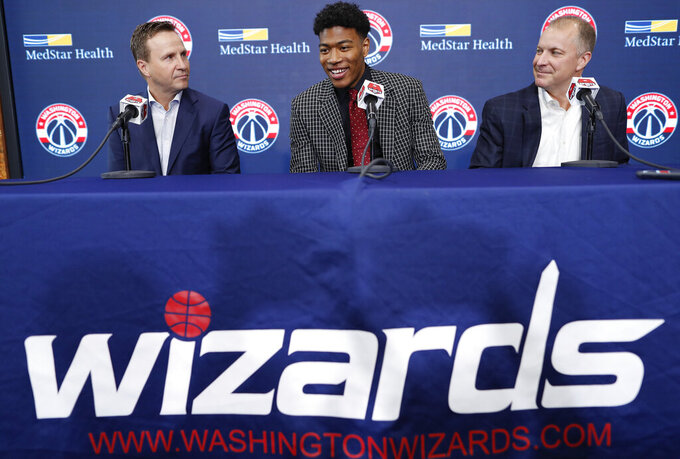 FILE - In this June 21, 2019, file photo, the Washington Wizards draft pick Rui Hachimura, of Japan, center, smiles during an introductory press conference with head coach Scott Brooks, left, and Senior Vice President of Basketball Operations Tommy Sheppard at Capital One Arena in Washington. The Washington Wizards won’t have Bradley Beal, John Wall or Davis Bertans when the NBA returns amid the coronavirus pandemic. That leaves a bunch of young players, led by rookie Rui Hachimura, the first Japanese player to be taken in the first round of the NBA draft. (AP Photo/Pablo Martinez Monsivais, File)

The Washington Wizards won’t have Bradley Beal, John Wall or Davis Bertans when the NBA returns amid the coronavirus pandemic -- and so the assumption is they won’t have much chance of making the playoffs, either.

And even if general manager Tommy Sheppard made clear back in September he was more interested in developing talent than counting victories this season, he wanted to make one thing perfectly clear as his team headed to the “bubble.”

“Certainly, we’re going there to win games,” Sheppard said. “We’re going to try to make the playoffs. That’s 100% our goal.”

When the league stopped play in March because of the COVID-19 outbreak, the Wizards were 24-40 and ninth in the Eastern Conference. That puts them 5½ games behind the team in the last playoff spot, the Orlando Magic, entering the eight-game sprint to the end of the regular season.

But the restart format of the season gives Washington a little extra hope, because it only needs to shave 1½ games off that gap to reach a play-in series that will determine the No. 8 seed in the East.

Still, Wizards coach Scott Brooks will not be working with a full roster -- and his GM will be doing some evaluating with an eye to next season.

“This is a whole new approach. You’ve got to kind of take it as a different season and play with what you have,” forward Moe Wagner said. “It’s a completely different group after four months, the last time we played together.”

Beal, second in the league this season at 30.5 ppg, opted out of the resumption because of a lingering shoulder issue. Bertans, No. 2 on the Wizards in scoring and a top 3-point threat, is also sitting out now, rather than risking injury or illness ahead of free agency. Wall missed the entire season recovering from a torn Achilles tendon.

That leaves a bunch of young players, led by rookie Rui Hachimura, the first Japanese player to be taken in the first round of the NBA draft.

“We need reps. We need opportunities,” Brooks said. “Our players are hungry. They don’t have a lot of NBA experience.”

Here is more about the Wizards, whose first game back is against the Phoenix Suns on July 31:

The Wizards added two players in July: Jerian Grant and Jarrod Uthoff. Grant is a 6-foot-4 guard who is the son of former Washington player Harvey Grant and spent this season with the Capital City Go-Go; he’s played previously in the NBA with the Knicks, Bulls and Magic. Uthoff, a 6-9 forward, also was in the G League this season and has appeared in 13 NBA games. Two players who were injured back in March are available: G Ish Smith, F Isaac Bonga. More recently, C Thomas Bryant got the coronavirus but is healthy now.

Beal was making a strong case for all-NBA honors, putting up 53 and 55 points in consecutive games and scoring at least 25 for 22 of Washington’s last 23 games before play was stopped. He was, without a doubt, the highlight for a club that was able to score but couldn’t really stop opponents from putting up points.

Without the offense that Beal, Wall and Bertans could provide, everyone associated with the Wizards knows they they need to do much better at the other end of the floor if they’re going to have any success in Florida. Hachimura put it bluntly: “As a team, I think defense is our weakness.” Washington’s opponent scored at least 100 points in 27 of its last 28 games; for the season, other teams were averaging 119.7 points on 49% shooting. “We still have a lot of work to do,” Brooks said. “We’re going to throw some new things in there and see how we respond.”

Shabazz Napier, 2018 first-round pick Troy Brown Jr., and Smith all figure to get plenty of time in a backcourt missing the franchise’s top two players, Beal and Wall. “No one on this team can replicate what Bradley was able to do on a consistent basis,” said Napier, who won two NCAA Tournament titles at UConn.