No chance to tri; Mass participation sports hit by virus 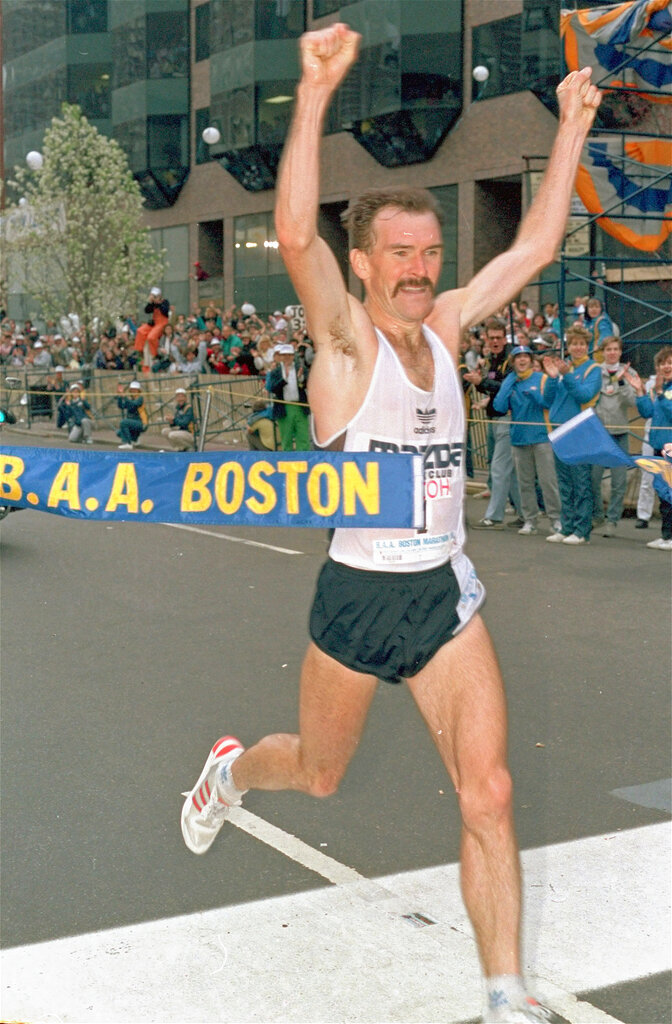 FILE - In this April 21, 1986, file photo, Rob de Castella of Australia breaks the tape to win the 90th running of the Boston Marathon in Boston. The Noosa Triathlon, which organizers say is the largest Olympic-format (1.5-kilometer swim, 40-kilometer cycle and 10-kilometer run) in the world was among the largest of more than 19,000 events canceled around Australia this year, with the loss of an estimated 11,000 jobs and more than 75 million Australian dollars ($54 million) lost to charities from money that is usually raised during the events. (AP Photo/David Tenenbaum, File)

NOOSA HEADS, Australia (AP) — The first weekend in November usually sees the 4,400 population of this Sunshine Coast resort town double or triple in size. When the Noosa Triathlon comes to town, so do athletes and their families, usually with two or three state-of-the art bikes worth tens of thousands of dollars slung on the top or back of their cars.

Fit-looking competitors, some of them Olympians but most just everyday people trying to keep in shape, stroll up and down the upmarket Hastings Street strip, spending money in restaurants and shops and adding millions of dollars to the local economy.

The Noosa Triathlon, which organizers bill as the largest Olympic-format (1.5-kilometer swim, 40-kilometer cycle and 10-kilometer run) in the world, was among the largest of more than 19,000 events canceled around Australia this year, with the loss of an estimated 11,000 jobs and more than 75 million Australian dollars ($54 million) lost to charities from money that is usually raised during the events.

In a sports-mad country like Australia, those figures — estimated by the Mass Participation Sporting Event Industry Alliance in Australia — are daunting.

“Decimated is the only word to use,” Chris Robb, the Indonesia-based chief executive of Mass Participation World said during a video conference call Thursday. ”We’ve heard reports in the U.S. that 75% of the mass participation sports industry will not return, and the estimate is 50% in Australia."

The Australian group says mass participation events in the country generate more than 5 billion Australian dollars ($3.65 billion) each year, but the group says the industry is “crumbling before our very eyes . . . without immediate support from the Australian government we are facing a bleak future for the 3.4 million Australians this industry supports to get active each and every year.”

The 38th annual Noosa Triathlon was canceled after the local Noosa council banned any gatherings of more than 500 people in the shire, which is a popular tourist destination. The event, which attracts 8,000 competitors annually and thousands more family and friends, wasn’t even close to meeting that restriction.

Predictably, the president of the Noosa Chamber of Commerce, Rob Neely, wasn’t pleased.

“Councils are not meant to be delving into the areas of epidemiology and they’re not qualified to do the same,” Neely said. “So to hear seven councilors or six councilors and a mayor stand up this morning and talk about public health requirements, that is not their remit. They have no qualifications."

Rob de Castella, a four-time Australian Olympian in the marathon who took part in Thursday’s call, was on the same page.

“It is easy to sit in an office and put a cross through events,” he said.

“We all understand the physical benefits, but I’m really conscious of the mental health and well-being,” Moneghetti said. “We are naturally a competitive people, but there is something about equality of mass participation events. Old, young . . . we are crossing all aspects of the community."

Australia has had international travel restrictions in place and 14-day quarantines for arrivals for about eight months since the outbreak began. The country has recorded 907 COVID-19 deaths as of Thursday, and most of those — 819 — in the southern Victoria state.

That wasn't the case in Queensland state, which has recorded six deaths due to the virus. There were dribs and drabs of tourists in Noosa Heads on Nov. 1, the scheduled day of the triathlon. Many came to the town just to ensure they kept their annual bookings at hotels they reserve year after year for the five-day event which includes fun runs for children, a Sports Lifestyle Expo and a charity golf event.

Some swam in Laguna Bay, cycled up to the Noosa hinterland or ran the 10-kilometer course which loops out and back from Hastings Street. But there was no real start, no finish and no opportunity to improve on their times. With a vaccine apparently on the way, for many it's a case of maybe next year.

“We need to find ways to get the industry back on its feet, so when this all ends, we have an industry to come back to,” de Castella says. “Virtual runs are great, but I think everyone is sick of virtual runs.”

Moneghetti agrees: “At some stage, we just need to bite the bullet and get back out there.”