No extra SC worker pay in budget now; but leaders promise it 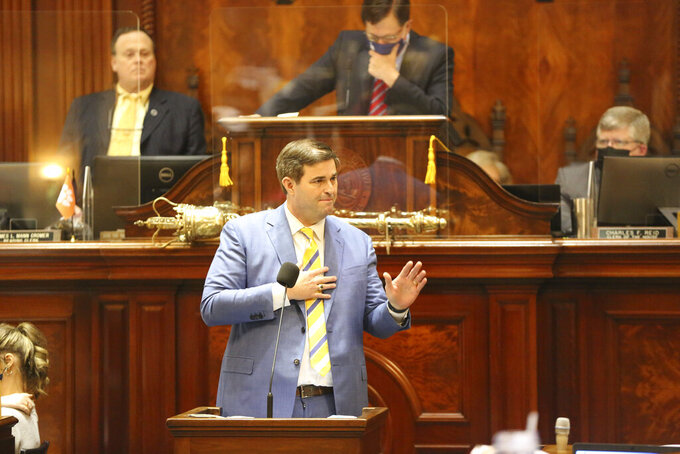 South Carolina House Ways and Means Chairman Murrell Smith, R-Sumter promises to give a raise or bonus to state employees once revenues are a little more clear during a debate on Tuesday, March 23, 2021, in Columbia, S.C. The House was debating the state's $9.8 billion budget for the next fiscal year. (AP Photo/Jeffrey Collins)

COLUMBIA, S.C. (AP) — The South Carolina House gave key approval to the state's $9.8 billion budget Tuesday, which provides small raises for most teachers and some law enforcement officers, but not for other state employees.

Republican leaders promised either a bonus or a raise for most lower-paid state employees if somewhat rosier predictions about the state's economy recovering from the COVID-19 downturn come true after taxes are collected this spring.

“To make sure we thank state employees and we recognize their hard work and their sacrifice — we need to do that with an increase in their pay," said Rep. Murrell Smith, the Republican chairman of the House Ways and Means Committee, which writes the budget.

Smith said if for some reason tax collection isn't enough to ensure revenue every year for a raise, he will push for a bonus.

Smith was responding to Rep. Gilda Cobb-Hunter, whose made her annual trip to the front of the House to ask for the raises.

“State employees are pretty fed up with being told to wait until next year,” the Democrat from Orangeburg said.

Cobb-Hunter pumped her fists as Smith made his promise even though he also made the motion that set aside, for now, her proposal to spend $41.5 million on a 2.5% raise for state workers making less than $75,000.

State employees appreciated the praise for working through the pandemic. But “there’s no paper that goes along with that praise,” Cobb-Hunter said.

She promised she would ask for a 5% raise later this year.

The House voted 112-6 to approve the budget Tuesday. The spending plan for the fiscal year that starts in July faces one more routine vote Wednesday before it goes on to the Senate.

But this likely is far from the final say on spending. The last estimate of tax revenues made in February had the state collecting less than $19 million in additional money each year, but economists said sales and income taxes were coming in at a much higher rate and South Carolina could find itself with hundreds of millions of dollars of new annual revenue.

House leaders decided to be conservative and wait for taxes to be in the state's accounts before spending it.

“Those of us who have been through the Great Recession saw us lay waste to state government. We are still recovering” Smith said of the 2008 economic disaster where the state budget fell 25% from $7.4 billion to $5.5 billion in two years.

The share of the budget that lawmakers have control over is now just under $10 billion.

The House plans to come back in late May or June for more budget hearings.

“As you have heard the chairman say, there will be a budget 2.0,” Rep. Nathan Ballentine, R-Chapin, said.

The 2021-22 fiscal year spending plan includes money for small annual pay raises for teachers based on their years of service that typically boost their pay by several hundred dollars a year. It also adds about $16 million for similar small raises and other bonuses to retain police officers and prison workers.

— $31 million to cover state-granted scholarships in case there is a dip in the lottery revenues typically used to pay for them.

— $50 million to set up a state disaster relief fund.

— $21 million to try to jump-start the tourism industry after the pandemic nearly shut it down.

— $1 million to buy bulldozers and other wildfire fighting equipment for the state Forestry Commission with enclosed cabs to protect drivers.