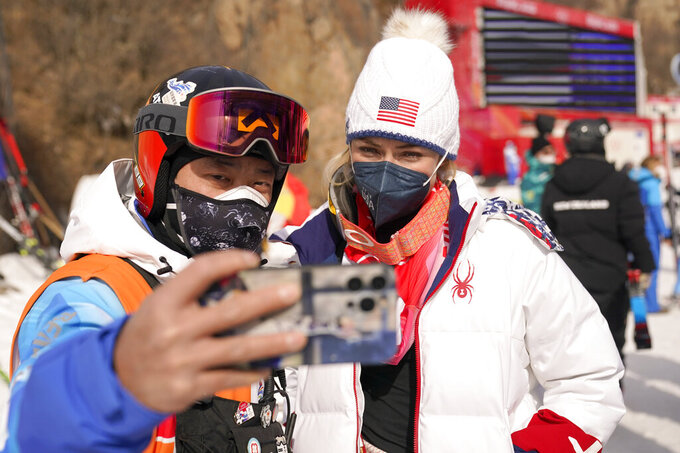 Mikaela Shiffrin, of United States poses for a selfie with a spectator after the women's super-G at the 2022 Winter Olympics, Friday, Feb. 11, 2022, in the Yanqing district of Beijing. (AP Photo/Robert F. Bukaty)

BEIJING (AP) — Shaun White’s brilliant and transcendent Olympic career is over. It ended with a fall on his final run down the halfpipe, a heartfelt ovation from the crowd and then a tearful farewell to a sport he helped define.

A few mountains away, Mikaela Shiffrin finally made it all the way down the Alpine ski hill, finished ninth in super-G and then expressed relief.

There were no medals and different emotions Friday for two of the biggest American stars at the Beijing Olympics.

Shiffrin could have two more chances to become the first Alpine ski racer from the United States to win three Olympic golds across a career.

White, though, is finished. His fifth and final Olympics ended when he clipped the wall trying to land his second trick of his third run. Knowing it was over, he pulled off his helmet and acknowledged the crowd as he slowly rode the rest of the way down the halfpipe. Trying to win his fourth gold medal, he instead finished fourth.

“I’m not sad,” White said, although he cried a few times, including during an interview with NBC when he struggled to keep his composure.

“I’m proud of what I put down,” White said. “And I can’t help but think if I would have hit the podium in third, I would have wanted second. And if I’d have gotten second, I would’ve wanted first. It’s just the fighter in me, and I’m always hoping for more.”

White came shredding into the Olympics 16 years ago, a teenager from a San Diego suburb nicknamed "The Flying Tomato” because of his shaggy mop of red hair. He won the gold medal at Turin and repeated in 2010 in Vancouver. After finishing fourth in Sochi, he was back on the top of the podium in 2018.

Along the way he became a pop culture crossover.

Now 35 and his hair well-coiffed, White had his legacy on display all around him in the Secret Garden Olympic halfpipe.

“I’m sure every single person who competed today looked up to him for a very long time,” said bronze medalist Jan Scherrer of Switzerland. “It’s a very cool moment.”

The gold medalist, 23-year-old Ayuma Hirano of Japan, was one of them. He proved to be a worthy successor to White with an epic final run that included a trend-setting triple-cork, or three head-over-heels spins while twisting above the pipe, for a score of 96.

“I hoped I could send a message to him by showing my ride to him,” said Hirano, who grew up idolizing White.

Mikaela Shiffrin made it across the finish line of The Rock course on the Alpine hill for the first time in three races in the Beijing Games. She placed ninth in the super-G, well off the pace set by gold medalist Lara Gut-Behrami of Switzerland.

“It’s a really big relief to be here now in the finish, having skied a run well,” Shiffrin said. “I wasn’t skiing safe or anything. But I also did get to the finish and that’s really nice for my heart to know that it’s not totally abandoning everything I thought I knew about the sport.”

The 26-year-old from Colorado said she had felt emotionally fatigued.

“But when we got out today, I just feel a little bit more settled. A little bit quieter. Trying to keep some calmness and just trying to focus on the task at hand, so I could put my attention where I wanted and ski the hill and the course properly.”

Shiffrin could compete twice more individually in Beijing. She’ll have a few days to practice the downhill and decide if she’ll enter that race on Tuesday.

Ukrainian skeleton athlete Vladyslav Heraskevych held up a small sign that read “No War in Ukraine” at the end of his third run. The sign was printed on a blue-and-yellow piece of paper, the colors of Ukraine’s flag.

It is possible the International Olympic Committee could consider Heraskevych’s act a violation of Rule 50 of the Olympic Charter, which prohibits political demonstrations or propaganda during the games. But it also could fall into a gray area since the sign did not explicitly disrespect an opponent or criticize any political target.

Russian figure skater Kamila Valieva’s right to compete in the women’s event will be decided at an urgent hearing at the Court of Arbitration for Sport.

Both the World Anti-Doping Agency and the International Testing Agency — on behalf of the IOC — said Friday they would fight the decision by Russia’s anti-doping agency to allow the 15-year-old Valieva to skate in the competition starting Tuesday. The Russian agency provisionally banned Valieva on Tuesday because she failed a doping test in December. After an appeal, the agency lifted the ban Wednesday.

Valieva is the heavy favorite after setting world-record scores this season and landing the first quad jump by a woman at an Olympics when the Russian athletes competing as ROC, short for Russian Olympic Committee, won the team event Monday. The ROC said it will fight to keep that gold medal.

The U.S. women’s hockey team avoided an upset when it rallied to beat the Czech Republic 4-1 in the quarterfinals. Lee Stecklein scored the go-ahead goal on a shot from the right point 6:49 into the third period for the defending Olympic champions.

The Americans continue to struggle offensively. They needed 59 shots to score their four goals. Hilary Knight had a goal and assist, and Savannah Harmon and Kendall Coyne Schofield also scored.

Nils van der Poel of Sweden broke his own world record and won his second gold medal of the Beijing Games in the 10,000 meters, the longest race in the Olympic program. He added it to his victory in the 5,000.

His time of 12 minutes, 30.74 seconds broke his own world record of 12:32.95 set a year ago and was more than 9 seconds ahead of the Olympic record set four years ago by reigning champion Ted-Jan Bloemen of Canada.

Suzanne Schulting of the Netherlands successfully defended her title in 1,000-meter short track speedskating in 1 minute, 28.391 seconds. She set the world and Olympic records of 1:26.514 in the quarterfinals.