No prom? For this teen, it's a trifecta of missed milestones 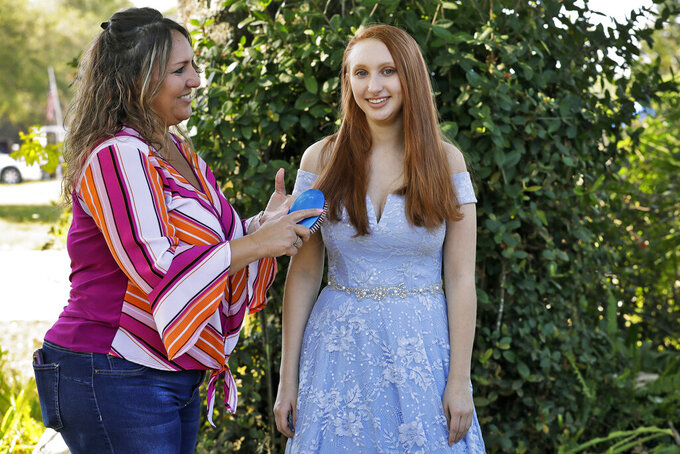 In this April 3, 2020 photo, Annette Reynolds, left, puts the finishing touches on her daughter Amanda's hair as she poses for a photo in her prom gown outside their home in Largo, Fla. Amanda, who recently turned 18, will miss her high school graduation and senior prom due to the coronavirus outbreak. (AP Photo/Chris O'Meara) 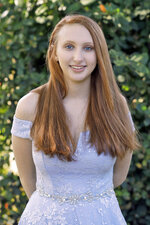 ST. PETERSBURG, Fla. (AP) — On a Friday night in late February, 17-year-old Amanda Reynolds raced into a department store on Florida’s Gulf coast. She’d been on a mission for weeks, and after countless hours shopping online and in stores, there it was.

Off the shoulder, blue lace, with crystal accents. Her perfect prom dress.

For decades, the prom has represented a cornerstone of American teenage life.

Combine prom with graduation and an 18th birthday, and it’s a trifecta of milestones. But now, for millions of Class of 2020 teenagers living through the coronavirus outbreak, these coming-of-age moments look and feel vastly different. And while they’re doing the best they can to reschedule, to wing it, to celebrate virtually with technology, the truth is that this generation will never regain these moments. Amanda Reynolds is like all of these young people – a case study in what is being lost by those who, in spring 2020, are on the cusp of adulthood and losing many of their expected rites of passage.

That day at Macy’s, experiencing the thrill of finding the perfect dress, Amanda had no idea a pandemic would change everything. Today, she is starting to process these missed memories.

“I miss going to school. I miss being able to talk to my friends and have something to do,” she said. “I feel a little guilt. There are people who are getting sick and dying, but this is also, like, I’ve been looking forward to this my entire school career. I get to be sad because my emotions are real."

One day on the phone, her grandma told her: “You are literally living through history right now.” Amanda thought, “I prefer my normal life.”

Here's how her milestones have unfolded this year.

PROM: Amanda bought that Cinderella dress on Feb. 28, in anticipation of prom a month later. She sailed through classes in the first two weeks of March. But at the start of spring break, on March 14, Amanda’s school sent a text message: Prom was postponed, indefinitely. Still, she figured, a new date would be set - probably late April. She carefully wrapped her Cinderella dress in plastic and hung it. She saw it each night before she went to bed and each morning when she woke up. She’d been waiting for a night to dress up with a group of girlfriends and have the most fun in all their 12 years of school. And if a guy asked her to dance, she probably wouldn’t say no. On April 13, Amanda got the terrible, if inevitable, news: Prom was canceled.

18TH BIRTHDAY: Before the pandemic, Amanda and her friends had dreamed up a three-day birthday extravaganza. They’d hang out in her jacuzzi at home, watch movies, go to the beach, and, for the big event, head to an “escape room,” an intense game where they’d discover clues and solve puzzles to win freedom. By the time her birthday rolled around, on April 5, her suburban Florida home had become an escape room — but without time limits, prizes or exits. Nowhere to go, no one to see. Her mom tried to make the day special. They drove to a convenience store, where Amanda bought her first lottery scratch-off ticket. She was the only customer. She and her mom made a cake infused with coffee and giggled while filming a video. They sang “Happy Birthday,” and presented Amanda her cake, with candles in the shape of the number 18. Amanda blew out her candles, and made a wish. For it to come true, she believes it must remain a secret.

GRADUATION: Amanda was supposed to graduate on May 22. The ceremony had been planned for Tropicana Field, home to Major League Baseball's Tampa Bay Rays. She already bought her cap and gown, but those items were trapped at school because they arrived after the lockdown. In mid-April, her school announced an online graduation, and Amanda has been waiting to hear details. Now it's also unclear is what will happen in the fall, when she had planned to start P-Tech, a local technical school, and take her first classes toward a nursing degree. In her last week of school in March she watched the movie “Contagion” — about a fast-moving virus — in one of her classes. Back then, she dismissed the idea that such a thing could ever happen in real life. "I didn’t want to believe that it was this bad, cause this much destruction, or that it would be this scary.'