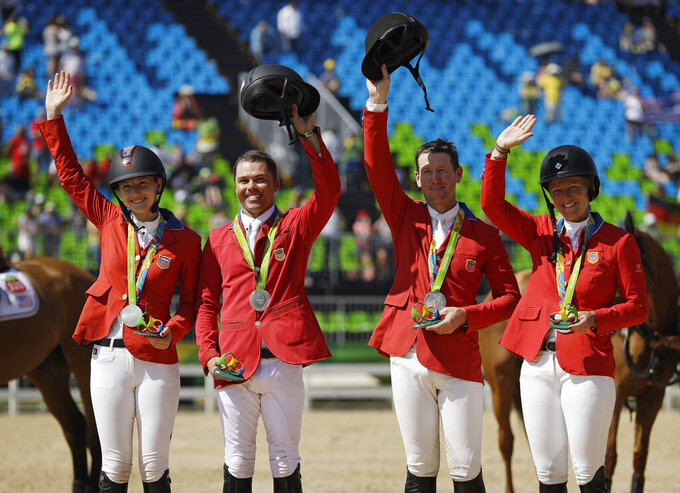 FILE - In this Aug. 17, 2016, file photo, from left, United States' Lucy Davis, Kent Farrington, McLain Ward and Elizabeth Madden celebrate after winning a silver medal in the equestrian team jumping competition at the 2016 Summer Olympics in Rio de Janeiro, Brazil. Ward returns to the U.S. equestrian show jumping team for the Tokyo Olympics, where they'll be a new wrinkle – three-person teams instead of four. It's part of an IOC directive to cut down on competitor numbers in some sports. It means that in the team show jumping event, they'll no longer be a fourth, or worst, score to throw out, making it easier for the public and television audiences to understand the scoring system as the event proceeds. (AP Photo/John Locher,File)

The IOC spoke and international equestrian federation officials listened. So there'll be a new wrinkle to the high-profile team jumping competition at the Tokyo Games — three-person teams instead of four for the the first time at the Olympics.

That means the worst score won’t be thrown out, as it was in the four-person team format. And there'll be more pressure on the three riders to get it right on the jumping course or potentially see their team miss a medal chance.

The move came when the International Olympic Committee “encouraged” the International Equestrian Federation (FEI) to keep their total number of athletes under 200, including dressage and eventing. The team jumping change should also make it easier for the public and television audience to keep track of the scoring as the competition unfolds.

“Like all sports in the Olympic movement, we received a clear message from the IOC president — ‘change or be changed’ — inviting the Olympic sports to make their events at the Olympic Games more universal, more exciting, easier to understand and more attractive, particularly for new young audiences,” the FEI said in a statement to The Associated Press.

The quota suggested was 200 athletes, and the FEI has come in right on the number for Tokyo — 75 for individual and team jumping, 65 for eventing and 60 for dressage.

Another benefit to the reduction in the team jumping numbers — 60 — means that more countries that can be represented among the individual riders. One example: Sri Lanka-born Mathilda Karlsson, who was adopted by Swedish parents and raised there, is expected to give the south Asian country of her birth its first equestrian competitor at the Olympics.

The reduction, though, will be most noticeable in the team jumping event. There will be just 20 teams in the first round, with only the top 10 teams, or 30 riders, going through to the final.

Robert Ridland, the chef d’equipe of the U.S. jumping team which won a silver medal at the 2016 Rio Olympics, wasn't surprised by the change.

“I’m actually in favor of it, it’s an excellent move,” Ridland told the AP in a telephone interview. “The IOC wanted it, and I think it’s going to make it much more understandable for the first-time viewer. You have to take the opportunity to broaden your appeal.”

Ridland was speaking from Rotterdam, where the U.S. team finished seventh at a Nations Cup event in the Netherlands. The Nations Cup still has four-person teams and the FEI's signature series will continue with that format despite the Olympics switching to three.

The Rotterdam event made Ridland, who rode for the U.S. at the 1976 Montreal Olympics and has been chef d'equipe and U.S. team technical advisor since 2013, realize how much more understandable the Olympic three-person format will be.

“When dealing with the second half of the second round of the Nations Cup, it’s always complicated,” he said. “This new format will eliminate the confusion as far as scoring goes. The lowest number will win, similar to golf. It conforms to other sports."

US Equestrian announced its jumping team for the Tokyo Games earlier this week — Kent Farrington, Laura Kraut, Jessica Springsteen and McLain Ward. Only three of those riders will be eligible for the team event.

Ward, who won gold on U.S. jumping teams at the 2004 Athens Games and the 2008 Beijing Olympics, and Farrington, return from the team which won silver at Rio. Both will be riding new horses, though — including Ward on Contagious, a 12-year-old gelding well-named for an OIympics delayed a year by the coronavirus.

Springsteen, the 29-year-old daughter of rock star Bruce Springsteen, is the “youngster" of the group and is making her Olympic debut. Farrington is 40, Ward is 45 and Kraut is 55, and the trio have competed at a combined seven Olympics.

Ridland said that riders of championship experience “will have an edge, to some degree." He adds that as team leader he had to deal with the reality of a three-person team at the 2016 Olympics.

Four-time Olympian Beezie Madden’s horse, Cortes ‘C’, sustained a tendon injury during the first round at Rio and had to be withdrawn from the final round. So the Americans were unable to throw out their worst score, yet still finished second behind France.

“So you deal with it,” Ridland says. “It’s part of the complexities of our sport."