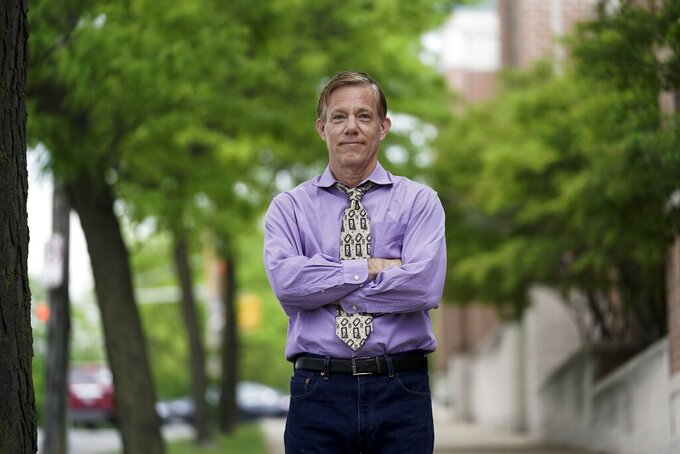 Benjamin Lund is seen Friday June 5, 2020, in Milwaukee. Lund is a longtime Republican who was raised in a conservative family in the political battleground of Wisconsin, now plans to vote a straight Democratic ticket and rejects any effort by Trump to put a "silver lining" on the nation's pain. (AP Photo/Morry Gash)

MADISON, Wis. (AP) — At the end of one of his most turbulent weeks in office, President Donald Trump was eager on Friday to boast of a better than expected jobs report to argue the country is poised for a booming recovery. Benjamin Lund was not moved.

The 45-year-old Milwaukee man is a longtime Republican who was raised in a conservative family in the political battleground of Wisconsin. At the onset of 2020, he had little doubt that he would support Trump's reelection.

Then the pandemic hit and Lund lost his restaurant job. A processing backlog meant he went two months without unemployment benefits. He later watched with dismay Trump's hard-line response to the police killing of George Floyd and the civil unrest that followed.

Lund, who is white, now plans to vote a straight Democratic ticket and rejects any effort by Trump to put a “silver lining” on the nation's pain.

“The people living the economic reality of what’s soon to be a recession, it’s a very different set of numbers,” Lund said. “It’s almost, in a sense, disrespectful to try and put a positive spin on where we are as a nation right now.”

That's a stinging warning sign for Trump in a state that's crucial to his bid to keep the White House. Though the president would rather voters focus on an unemployment situation that's less catastrophic than some economists predicted, Trump's whipsaw ways are colliding with a pandemic and civil unrest of a scale the country has not seen since the 1960s.

With five months until the election, Trump has time to solidify his standing. But some Republicans fear voters are simply worn out by Trump.

“People are just so disgusted with how things are," said Republican strategist Terry Sullivan, who managed Florida Sen. Marco Rubio's 2016 presidential campaign. "Even the most die-hard Trump supporters are exhausted.”

Trump is leading a nation grappling with unemployment rates not seen since the Great Depression. More than 1,000 Americans are still dying each day from COVID-19. Millions have taken to the streets to fight for racial justice. And the National Guard was on the ground this week to help quell the social unrest, rioting and related violence.

Just 21% of voters believe the United States is on the right track, Monmouth University found in a poll released this week that marked a seven-year low.

Trump's defeat is far from certain.

He has repeatedly demonstrated the rules that have long governed presidential politics rarely apply to him. Almost his entire first term has been plagued by scandal, yet his approval numbers have been remarkably consistent, albeit consistently weak. He continues to command extraordinary media attention and, with it, the ability to define the national conversation.

Such skills helped him overcome dire predictions four years ago, when his victory surprised even some of his own advisers.

There is a key difference between 2016 and 2020, however, says conservative attorney George Conway, husband of Trump chief counselor Kellyanne Conway and a fierce Trump critic.

“He’s the incumbent this time. He’s the one with the record. He’s the one being judged here," Conway said in an interview. "Four years ago that wasn’t the case. And people could project on him characteristics that he didn’t have, precisely because he didn’t have a record. Now, we know who he is. He can’t escape that. And he’s going to get worse as he gets more and more desperate."

Still, the president inspires tremendous loyalty among Republican elected officials and many rank-and-file voters, particularly among the white working-class people who fueled his 2016 victory and are convinced Trump is fighting for them. Many are willing to give him the benefit of the doubt at a difficult time.

Steve Beaver, a 56-year-old commercial cable installer from the Harrisburg, Pennsylvania, area, said he values Trump’s conservatism and handling of the economy. He sees the protests as unrelated to Trump.

Trump and his team are betting they can shift attention away from his own divisive leadership toward a shrinking minority of violent protesters. The president has advocated sending active-duty troops into American cities despite resistance from the governors involved and his own Cabinet members. Defense Secretary Mark Esper this week shot down Trump’s idea to dispatch military forces on American soil. On the same day, his predecessor at the Pentagon, Jim Mattis, chastised Trump for violating protesters' constitutional rights.

The party has struggled with a response.

Many current Republican officeholders declined to defend Trump's actions this week, preferring to say nothing at all.

Former South Carolina Rep. Mark Sanford, who ran a short-lived Republican primary campaign against the president, said Trump's willingness to ignore constitutional safeguards “is a threat to our way of life.”

The degree to which he doesn’t seem to get, like or care for limits on power I think is disturbing," Sanford said.

Trump's loudest defenders this week were those on his payroll.

Campaign spokesman Tim Murtaugh noted the president “expressed horror" at Floyd's killing at the hands of police and quickly launched a civil rights investigation. He then shifted his attention to the violent protesters, even as reports of violence across the country begin to subside.

“Rioters have burned businesses to the ground, destroying the life’s work of countless people, many of them in minority communities,” Murtaugh said. “The president has made a clear, unequivocal stand for law and order, as Americans need to feel safe in their communities to live and return to work.”

Questions remain about whether Trump’s brazen push to inflame racial tensions will ultimately boost his standing with white voters, particularly those with college degrees. At the same time, Trump's approach is helping to energize African American voters against him.

Detroit resident Richard Grundy said that, just a few weeks ago, he was considering not voting in November for the first time in his life to protest what he saw as a lack of viable presidential candidates.

Grundy, 38, who leads the nonprofit organization JOURNi, supported Elizabeth Warren in the Democratic primary and felt the remaining candidates failed to truly address issues facing black Americans. But after Trump’s recent actions, Grundy said he and many other African Americans feel like they have no choice but to vote for presumptive Democratic nominee Joe Biden.

“The entire country, the entire world is desperate to get Trump out of office,” Grundy said. “Just seeing the reaction of the inaction to everything that’s happening, I think we have to vote him out now."

There are also signs of suburban women moving away from Trump.

In Texas, 48-year-old Lisa Gerodimos attended a protest for racial justice this week with dozens of neighbors outside a gated golf community in Round Rock. The Austin suburb is among many shifting left and making the GOP anxious about their grip on the nation’s biggest Republican state. Trump won this district by 13 points in 2016. Two years later, Republican Rep. Jon Carter eked out a ninth term by just 3 points.

“This neighborhood? I got tears in my eyes,” Gerodimos, a white educational assistant, said of the turnout. She said she wasn't going to support Trump before Floyd’s death but is now considering recruiting new Democratic voters.

Republicans on the ballot this year fear that another blue wave could extend the Democrats' House majority and help them reclaim the majority in the Senate. Yet the head of House Republicans’ campaign organization predicted the protests and Trump’s reaction would help GOP congressional candidates.

“The law and order issue is huge,” Rep. Tom Emmer, R-Minn., said in an interview. “Whether it’s in communities that are getting destroyed every night and that people are watching on TV or in the suburbs. These people want law and order.”

Emmer, chairman of the National Republican Congressional Committee, said there’s a difference between “peaceful protest and thugs and criminals, people who loot." He said “decades of failed liberal policies” were to blame.

But back in Wisconsin, a state Trump narrowly carried four years ago, the restaurant worker Lund isn't so sure.

He said he's been closely following the protests, one of which passed by his house. He and his wife, whose mother is black, have been talking nightly about race issues.

“In typical fashion, the Republicans are focusing on the looting and crime aspect, which has nothing to do with the legitimate political movement in this country,” Lund said.

“I was already planning to vote in November,” he continued. “Now I would take a day off of work if I had to in order to do it. There’s no question the Republicans need voting against.”