With no summit, South Korean president to skip Olympics 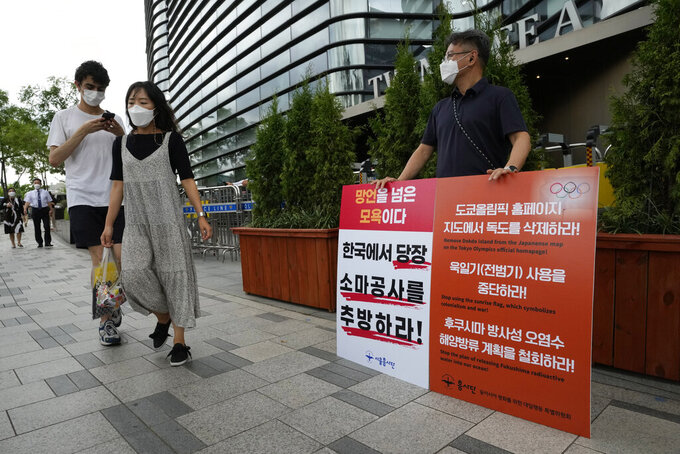 A protester stands to oppose South Korean President Moon Jae-in's possible visit to Japan in front of a building which houses Japanese embassy in Seoul, South Korea, Monday, July 19, 2021. Moon has decided not to visit Japan for the Tokyo Summer Olympics, citing a failure to set up a summit with Japan's prime minister that would produce meaningful results in improving relations. The signs on a banner at left read "Expel Hirohisa Soma, deputy chief of mission at the Japanese Embassy in Seoul, from South Korea." (AP Photo/Ahn Young-joon)

SEOUL, South Korea (AP) — South Korean President Moon Jae-in has decided not to visit Japan for the Tokyo Summer Olympics, citing a failure to set up a summit with Japan's prime minister that would produce meaningful results in improving relations.

Moon’s office said Monday that officials from Seoul and Tokyo held talks over longstanding disputes about wartime history and a “future-oriented” development of their relations, but did not find enough common ground to support a summit between their leaders.

The countries had been discussing the possibility of Moon visiting Tokyo to participate in the Olympics’ opening ceremony and having talks with Prime Minister Yoshihide Suga about repairing bilateral ties that have sunk to postwar lows in recent years with disputes over history, trade and military cooperation.

It was unclear how close they came to setting up a summit. Seoul said their talks were damaged by a “last-minute obstacle.”

The announcement by Moon's office came after the South Korean Foreign Ministry on Saturday summoned Japanese Ambassador Koichi Aiboshi to protest remarks made by another senior Japanese diplomat who, according to a local broadcaster, used lewd language with its reporters to ridicule Moon’s hopes about using the Olympics to improve relations.

When asked whether the incident influenced Moon’s decision not to go to the Olympics, a senior South Korean presidential official acknowledged that the “internal atmosphere” at the Blue House “shifted toward skepticism” after the JTBC report. The official, who spoke on condition of anonymity during a background briefing, did not provide details about the discussions with Japan on setting up Moon’s visit.

Suga told reporters he hopes to “continue to communicate firmly” with South Korea's government in order to restore a healthy relationship between the neighbors. He said Soma’s comments were “very inappropriate and regrettable.”

Japanese Chief Cabinet Secretary Katsunobu Kato said no decision has been made on whether Soma will be removed from his current position.

The South Korean government delegation at the Olympics will be led by Hwang Hee, the minister of culture, sports and tourism.

“The Tokyo Olympics are a festival of peace for people around the world, and we hope that Japan holds the Olympics safely and successfully,” said Park Soo Hyun, Moon’s spokesperson, reading a statement on TV. “We also hope our athletes, despite the difficult conditions, fully display the skills they have developed in competition and return home healthy.”

Relations between Seoul and Tokyo have been strained since South Korea’s Supreme Court in 2018 ordered some Japanese companies to compensate Korean forced laborers for their ordeals during Japan’s 1910-1945 colonial rule of the Korean Peninsula. The rulings led to further tensions over trade when Japan imposed export controls on chemicals vital to South Korea’s semiconductor industry in 2019.

Seoul accused Tokyo of weaponizing trade and threatened to terminate a military intelligence-sharing agreement with Tokyo that was a major symbol of their trilateral security cooperation with Washington. South Korea eventually backed off and continued the deal after being pressured by the Trump administration, which until then seemed content to let its allies escalate their feud in public.

The countries have been trying to improve relations since the inauguration of U.S. President Joe Biden, who has called for stronger three-way cooperation in the face of North Korean nuclear threats and challenges posed by China. But progress has been slow and friction between the countries has continued as the Olympics approach.

Leif-Eric Easley, a professor of international studies at Ewha Womans University in Seoul, said South Korea and Japan have squandered an easy opportunity to signal their willingness to improve relations.

“The Moon administration has not made enough domestic progress in addressing legal and historical challenges to diplomacy. Meanwhile, the Suga government has mismanaged the situation by insufficiently prioritizing Korea to the point of discourtesy,” Easley said.

“Members of the Biden administration are no doubt disappointed while leaders in North Korea and China delight in the disunity of U.S. allies.”

Also on Saturday, South Korea’s Olympic Committee removed banners at the Olympic athletes’ village in Tokyo that referred to a 16th-century Korean naval admiral who fought off an invading Japanese fleet after the International Olympic Committee ruled they were provocative.

In agreeing to take down the banners, the South Koreans said they received a promise from the IOC that displays of the Japanese “rising sun” flag will be banned at stadiums and other Olympic venues. The flag, portraying a red sun with 16 rays extending outward, is resented by many people in South Korea and other parts of Asia who see it as a symbol of Japan’s wartime past. ___