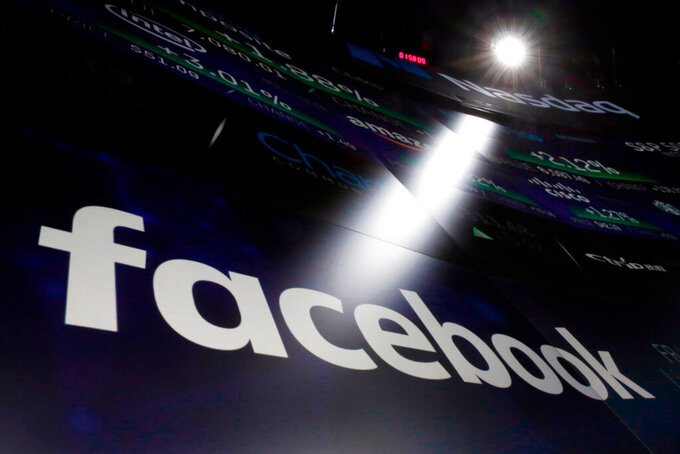 FILE - In this March 29, 2018, file photo the logo for Facebook appears on screens at the Nasdaq MarketSite in New York's Times Square. Facebook made it through the 2020 election cracking down political misinformation with a few tweaks to its rules and stepped-up enforcement. While many of the changes were supposed to be temporary, emergency measures, it is becoming increasingly clear that there is no returning to the Facebook of the past. (AP Photo/Richard Drew, File)

It's becoming increasingly clear that for Facebook, there is no returning to its habits of the past.

Some of its most dramatic post-election changes, from algorithm tweaks to a strict crackdown on political misinformation, were supposed to be temporary — “ break-glass " measures intended to prevent civil unrest as then-President Donald Trump spread false claims of a “rigged” election.

But the Jan. 6 insurrection, the rise in COVID vaccine misinformation and the persistent spread of malicious conspiracies — coupled with a new U.S. president and growing regulatory scrutiny around the world — have forced a reckoning at the social network.

“They don’t want to be the arbiters of free speech,” said Cliff Lampe, a professor studying social media platforms, moderation and misinformation at the University of Michigan. “But they have to be.”

For CEO Mark Zuckerberg, the past year has presented a series of humbling events that have picked away at his long-held assertion that Facebook is a worldwide force for good. In Facebook posts, public comments and discussions with employees, the CEO appears to be increasingly grappling with the dark side of the empire he created.

Take his approach to Trump, who until January enjoyed special treatment on Facebook and other social media platforms, despite spreading misinformation, promulgating hate and — what finally got him banned — inciting violence.

“Over the last several years, we have allowed President Trump to use our platform consistent with our own rules, at times removing content or labeling his posts when they violate our policies," Zuckerberg wrote on his Facebook page on Jan. 7, explaining the company's decision to suspend Trump. “We did this because we believe that the public has a right to the broadest possible access to political speech, even controversial speech."

A day earlier, violent insurrectionists, egged on by Trump, descended on the U.S. Capitol in a deadly riot. While Facebook's (and other tech companies') move to ban a sitting president was unprecedented, many called it too little, too late.

It’s not yet clear if Facebook will banish the former president permanently, as Twitter has. The company batted that decision over to its quasi-independent Oversight Board — sort of a Supreme Court of Facebook enforcement — which is expected to rule on the matter in April. On Thursday, Zuckerberg, along with the CEOs of Twitter and Google, will testify before Congress about extremism and misinformation on their platforms.

Companies like Facebook are “creeping along towards firmer action,” said Jennifer Grygiel, a Syracuse University communications professor and an expert on social media, while noting a Trump ban alone doesn't undo years of inaction.

Lampe said he doesn't doubt that Facebook would like to return to its pre-2020, hands-off approach, but public pressure to crack down on extremism will likely win over. That's because online extremism, fueled by social media — in the U.S. and around the world — is more and more tied to real-world violence.

The company is also facing a growing internal push from increasingly vocal employees, some of whom have quit publicly, staged walkouts and protests in the past year. Last summer, meanwhile, advertisers staged a boycott of Facebook's business. And activists are finding growing support from lawmakers on the state, federal and global level.

Jessica Gonzalez, attorney at the racial justice group Free Press, recently joined Democratic Rep. Tony Cardenas and Latino activists in calling on Facebook to crack down on hate and misinformation targeted at Latinos in the United States. She said when she and other civil rights activists met with Zuckerberg last summer during an advertising boycott of the company, she reminded him of the 2019 massacre in El Paso, when a gunman targeting Mexicans killed 23 people.

“Facebook has a choice," she said. It can be a “vector for hate and lies that harm people of color, Latinos, immigrants and other groups," or on the right side of history.

“So far it has done a lot of talking," Gonzalez said.

Facebook says it's met with the organizations and shares their goal of stopping Spanish-language misinformation on its apps.

“We are taking aggressive steps to fight misinformation in Spanish and dozens of other languages, including by removing millions of pieces of COVID-19 and vaccine content," the company said in a statement.

Though its moves have often been halting, the social media giant has worked to address some of the criticisms lobbed at it in recent years. Besides election misinformation, it has put restrictions on anti-vaccine propaganda, banned extremist groups such as QAnon, limited recommending other problematic groups to users and tries to promote authoritative information from health agencies and trusted news organizations.

“There’s no single solution to fighting misinformation which is why we attack it from many angles,” Facebook said in a statement, pointing to its removal of fake accounts and coordinated networks, fact-checking partnerships and providing authoritative information. “We know these efforts don’t catch everything, which is why we’re always working in partnership with policymakers, academics, and other experts to adapt to the latest trends in misinformation.”

Facebook's reluctant shift toward more self-regulation didn't begin with the 2020 election. An earlier turning point for the company and for Zuckerberg himself, Lampe recalled, was the company's role in inciting genocidal violence against Rohingya Muslims in Myanmar.

In 2018, Facebook commissioned a report on the role its platform played in stoking ethnic cleansing. It found that Facebook “has become a means for those seeking to spread hate and cause harm, and posts have been linked to offline violence."

“It was a humbling experience for company and for (Zuckerberg) personally," Lampe said.

After Myanmar, Zuckerberg promised to do better, but its failures to stop spreading military propaganda continued. Now, with the country under a military coup, it faces yet another “emergency" situation that has no clear end in sight. The company banned the Myanmar military from its platform in March, but critics say it should have acted sooner.

The 2020 U.S. presidential election also qualified as an emergency, as did the COVID-19 pandemic, which most recently led Facebook to expand its policy on anti-vaccination falsehoods, banning claims saying vaccines aren’t effective or that they’re toxic, dangerous or cause autism — all of which have been thoroughly debunked.

Does this series of emergencies represent a meaningful shift for Facebook? Or is the company simply responding to the changing political climate, one that wants to see Big Tech regulated and dangerous speech reined in? Not everyone is convinced. the company has turned a corner.

“At the end of the day, Facebook's response to disinformation is always going to be driven by how to increase their user engagement and advertising revenue," said Alexandra Cirone, a professor at Cornell University who studies the effect of misinformation on government. Facebook denies that it places profits over cracking down on misinformation.

While tech companies are facing the prospect of stronger regulation with President Joe Biden's administration, Cirone said the company is more likely to respond to the fact that “there are conservative organizations, politicians, and donors that give Facebook a significant amount of money in ad revenue."

Regardless of who is president, “as long as Republicans or other groups are spending millions to advertise on on Facebook, they will be slow to regulate," she said.