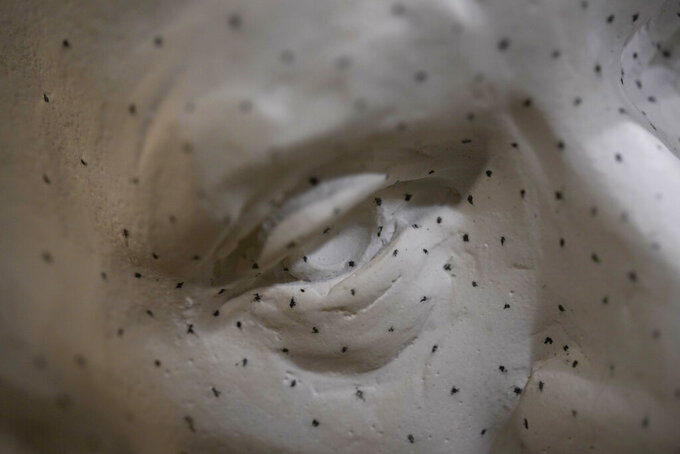 Points cover the surface of a plaster model from a sculpture by Chas Fagan of Holocaust survivor and Nobel Peace Prize winning author Elie Wiesel in the Human Rights Porch at the Washington National Cathedral, Thursday, March 25, 2021. The marks are made with a pointing machine, a measuring tool to accurately copy plaster sculpture models into stone. (AP Photo/Carolyn Kaster)

WASHINGTON (AP) — Washington National Cathedral, the massive Episcopal house of worship that prides itself on being an unfinished work-in-progress whose stones and stained glass tell the story of the 20th and 21st centuries, is unveiling its newest addition: a carving of iconic author, human rights campaigner and Holocaust survivor Elie Wiesel.

The carving completes a quartet of heads of prominent figures sprouting from the four corners of an alcove known as the Human Rights Porch, joining Mother Teresa, Rosa Parks and Jonathan Myrick Daniels, a young Episcopal theologian and civil rights crusader who was shot to death in Alabama in 1965, giving his life to protect a 17-year-old Black woman.

“This is the space where we celebrate human aspiration,” cathedral spokesman Kevin Eckstrom said.

Wiesel, who died in 2016, was the author of 57 books including “Night,” which is based on his experiences as a Jewish prisoner in the Auschwitz and Buchenwald concentration camps. He became an outspoken advocate for human rights causes around the world, helped found the United States Holocaust Memorial Museum and was awarded the Nobel Peace Prize in 1986.

The Rev. Randy Hollerith, the cathedral’s dean, chose Wiesel for the alcove’s final corner, calling him “the living embodiment of resilience in the face of hatred.” Wiesel’s inclusion is particularly important as the number of living Holocaust survivors dwindles, he added.

“We have to make sure that we keep that reality in front of people,” Hollerith said. “Those who stood for human rights and human dignity ought to be part of this sacred space.”

Artist Chas Fagan, who created all the sculptures in the Human Rights Porch, worked off photos and videos provided by Wiesel’s family to fashion a clay image of Wiesel's head that cathedral stone carver Sean Callahan and head stonemason Joe Alonso used to make a plaster model. Then Callahan, using specialized calibration equipment, painstakingly carved the image into a small slab of rock that has been sticking out of the wall for years awaiting a fourth face.

During an early April visit to the cathedral by The Associated Press, Callahan was putting the finishing touches on the carving about 10 feet (3 meters) above the floor.

“We’re about 95 percent of the way there,” said Callahan, who also did the other three faces. “But this last 5 percent takes forever because there’s a lot of precise detail work.”

He was able to complete the job about twice as quickly as the previous ones because the cathedral was closed due to the coronavirus pandemic, meaning he didn’t have to work around sermons and other events.

Before it was permanently etched into stone, the image of Wiesel was approved by his widow, Marion. The Holocaust Museum and the Elie Wiesel Foundation for Humanity will partner with the cathedral for a series of events and programs later in the year.

Conceived in the 1990s, the Human Rights Porch also includes small statues of former first lady Eleanor Roosevelt and Óscar Romero, the Roman Catholic archbishop of El Salvador who was assassinated in 1980 and was later canonized as a saint by Pope Francis, in 2018.

Wiesel’s addition highlights Washington National’s unusual nature as a living canvas — unlike other Gothic cathedrals which are, by definition, somewhat frozen in time.

Alongside traditional figures like the Apostles St. Paul and St. Peter, there are dozens of modern features: a carving of Helen Keller, who is buried there; a statue of Martin Luther King Jr., who delivered his final Sunday sermon at the cathedral in 1968 before his assassination in Memphis; and a stained glass window dedicated to scientific achievements that includes a piece of moon rock.

Another modern, and whimsical, touch is the so-called businessman or yuppie gargoyle, depicting a Gothic creature with sideburns and holding a briefcase.

“One of the wonderful things about having a 20th century cathedral,” Hollerith said, “is that you can have 20th century iconography in it.”