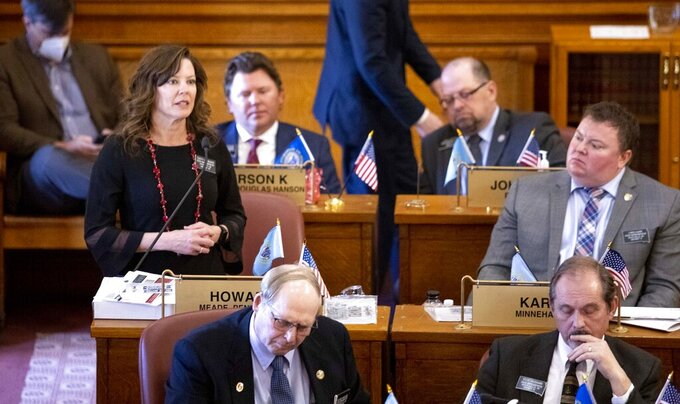 SIOUX FALLS, S.D. (AP) — Despite South Dakota Gov. Kristi Noem's renewed push for lawmakers to take up issues she feels were left unsettled during the regular legislative session, including banning transgender girls from girls' sports, lawmakers said they won't address it during a special session this year.

The Republican governor's office held a conference call Wednesday with legislative leaders to discuss summoning them back to Pierre for a special session, which would also include discussions on how to spend over $1 billion that is flowing into the state from a federal COVID-19 rescue package and changes to a voter-passed medical marijuana bill set to go into effect July 1. She pitched tackling a ban on transgender girls and women from sports leagues that match their gender identity in two bills, addressing collegiate sports and high school sports separately.

However, Republican legislative leaders like House Speaker Spencer Gosch said transgender athletes won't be addressed this year, pointing out the move would die in the Senate. Gosch supported a bill that was passed by the Legislature last month, but it died after Noem vetoed parts of it.

Senate Pro Tem Lee Schoenbeck, a Republican who opposed the bill, has said he doesn't think a special session should be used to address issues that were already hashed out during the regular session.

As the session ended last month, key Republican lawmakers were left sparring with Noem, resulting in the demise of two high-profile bills. One bill would have banned transgender girls and women from participating in sports leagues that align with their gender identity; while the other would have delayed a voter-passed law to legalize medical marijuana.

Facing criticism from social conservatives for scuttling the transgender sports bill, Noem issued an executive order to push school boards and the high school activities association to change its policy of evaluating applications from transgender athletes on a case-by-case basis. She had described the orders as “temporary” until she called a special session in May or June, but said this week they could stay in place if the Legislature doesn't address a ban.

“I can call a session, but it's really up to the Speaker of the House, Spencer Gosch, if he thinks it's important enough to have a discussion or if they would like to ... move forward and keep the executive orders in place," the governor said in an interview with Dakota Radio Group this week.

However, critics of Noem's orders have said they don't carry the force of law and amount to little more than a recommendation. Indeed, school boards and administrators have shied away from Noem's order, indicating they will stick with the high school sports activities association's current policy, at least until the issue comes to some resolution in the Legislature.

Gosch also refuted the notion that the special session is up to him, pointing out that the governor’s role is to issue the proclamation and determine the scope for a special legislative session.

He said that when the Legislature meets in June, he saw the changes to the medical marijuana law as “easy fixes.". The governor has proposed setting a limit on the number of cannabis plants allowed in medical users’ homes, prohibiting patients under 21 from smoking marijuana and clarifying the Department of Health’s authority to track marijuana before it is sold.