Noem refuses to say whether Biden victory was free and fair 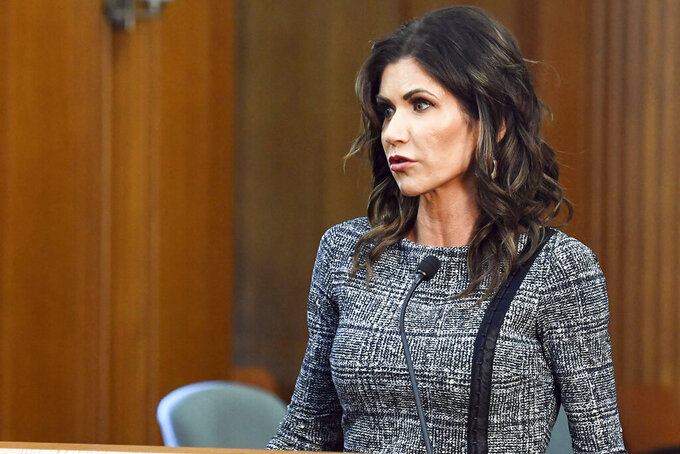 In her first public comments specifically addressing the election results since Congress certified Biden's victory hours after a mob of Trump supporters stormed the U.S. Capitol, Noem refused to say whether she erred by saying in November that election systems were “rigged” and casting doubt on the fairness of the election.

Instead, she said at a news conference, “I think that we deserve fair and transparent elections. I think there’s a lot of people who have doubts about that.”

Noem has condemned the violence at the Capitol, but last week she declined to hold Trump accountable for having a role in it.

The state’s three members of Congress, all Republicans, rejected Trump’s false accusations and voted to certify the election. Noem hasn't done so, though, despite a lack of any credible evidence that the election wasn't fair. Even Trump administration officials said it was secure, including William Barr, who was attorney general at the time. And Trump's allegations have been refuted by a variety of judges, state elections officials and an arm of the Department of Homeland Security.

Noem acknowledged that Trump had a chance to argue his case in courts and the allegations were rejected. She also attended Biden's inauguration earlier this month and said she wanted to work with his administration to help South Dakota.

But her refusal to say whether the election was fair has also benefitted her own campaign and positions her to inherit or keep voters still loyal to Trump. She recently said she isn't interested in running for president in 2024, but political strategists say her actions suggest otherwise and she is still considered a contender.

Noem's rise to national prominence came as she touted her efforts to avoid business closures and mask mandates during the pandemic. She has faced scrutiny for those decisions, especially after the state's COVID-19 death rate became the highest in the Midwest after a surge of cases that peaked in November.

Noem defended her decision to not issue a mask mandate after legislative Democrats, who are in the minority in the state Legislature, introduced a bill that would have required people to wear masks in public statewide. Noem said she has not seen any evidence that mask mandates work.

“We have followed the science of the virus and what we know about it, the data and the facts on the ground,” she said.

Several studies have found that coronavirus infections spread slower in communities that have mask mandates compared to others that don't. And a growing amount of scientific evidence, including from the Centers for Disease Control and Prevention, shows that wearing masks helps prevent infections from spreading.

But state Sen. Reynold Nesiba, a Sioux Falls Democrat who sponsored the mask mandate proposal, said the state has lost “way too many” people to Noem's refusal to issue a mask requirement.

His bill isn't expected to pass and may not even proceed as far as a vote by the full Senate. Republican legislative leaders have said they would oppose the mask requirement and that they appreciated the governor's approach of relying on personal responsibility.