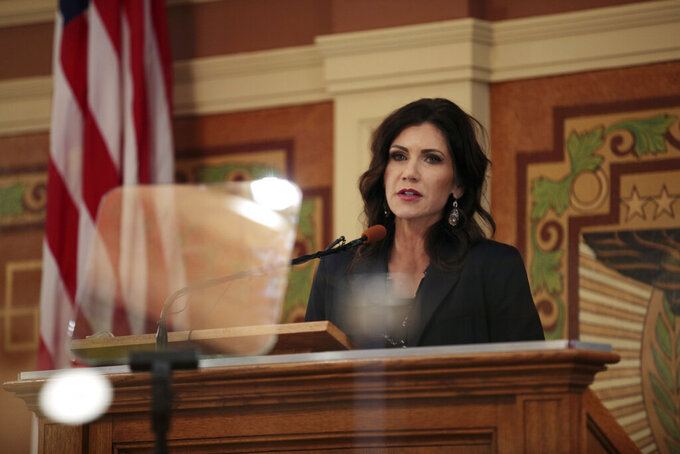 PIERRE, S.D. (AP) — South Dakota Gov. Kristi Noem on Tuesday used an announcement that the state will have an additional $125 million in one-time funds to tout her hands-off approach to the pandemic, while acknowledging that much of the windfall was thanks to the federal stimulus.

The Republican governor pointed to the state's unemployment rate, which is among the lowest in the nation, as proof that her decision to keep South Dakota "open” was the right one, even though the state has the highest rate of virus deaths per capita in the Midwest. The state suffered through one of the nation's worst waves of the virus late last year, and 1,809 people have died from COVID-19. In recent weeks, the number of cases and deaths in the state has steadily declined.

Noem contended that her decision has helped South Dakota avoid the dire economic straits seen in other states.

“South Dakota is in the position that we are today because of the approach that we took over the last year,” Noem told lawmakers. “As states across the country were shutting down, South Dakota remained open."

The governor called an 11% growth in ongoing revenue “unprecedented” in the last 30 years. But she warned that the boom could be short-lived, blaming both President Joe Biden's energy policies and federal stimulus dollars running out. She pushed lawmakers to tuck extra funds away into long-term investments, pay down state debt and invest in infrastructure projects.

Lawmakers were already debating how to use over $250 million in one-time funds this year. That windfall came largely thanks to the state using federal money to pay for expenses tied to the pandemic. Noem predicted that the state would have even more money available, with about $51 million coming from one-time revenue sources and another $74 million coming directly from federal funds for coronavirus relief.

A committee of lawmakers tasked with shaping the state budget will settle on revenue projections later this week. Lawmakers are also weighing proposals from Noem, which include: $100 million to expand the state's broadband internet networks, $50 million towards a needs-based scholarship endowment, $12 million for an events complex at the state fairgrounds, and $5 million for a new state airplane.

Democrats, who hold just a handful of seats in the Capitol, said that amid all the spending priorities from Republicans, the original intent of the federal funds was being missed.

He said that the federal stimulus had helped the state's financial position more than Noem's decision to allow businesses to stay open.

With more money to spend this year, he predicted new proposals would come forward, saying lawmakers would “handle them as they come.”