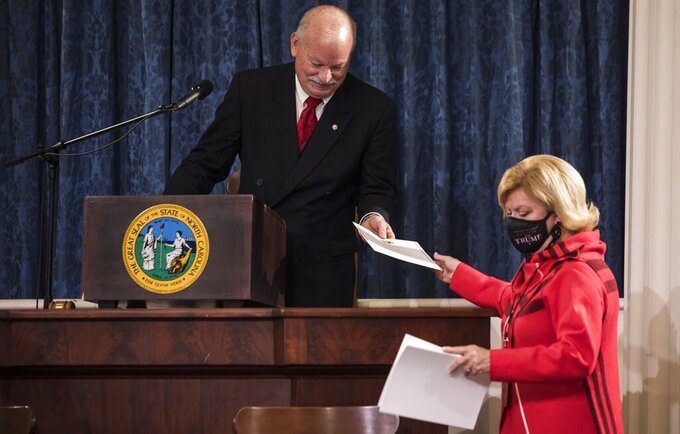 RALEIGH, N.C. (AP) — North Carolina awarded its 15 electoral votes to President Donald Trump on Monday, following the will of the people in a state where the Republican won a narrow victory.

The group of electors met in Raleigh at the old Hall of the House of Representatives in the State Capitol Building.

The pandemic has shifted the look of the Electoral College, with members and others in attendance required to get their temperature checked upon entry and wear a mask once inside. With COVID-19 infections and deaths rising in the state and nation, fewer people were allowed inside the chamber to witness the electors voting.

North Carolina Republican Party Chairman Michael Whatley, one of the electors who voted for Trump, said in an interview that he's pleased the state's election ran smoothly.

“Fortunately, here in North Carolina, we had a pretty clean election,” Whatley said, adding that the state and county boards of election “did a fantastic job.”

An energized base of supporters, vigorous in-person campaign schedule and appeal to rural voters fueled Trump’s 1.3 percentage point victory over President-elect Joe Biden in North Carolina, a state the Democrat didn't personally visit in the last 16 days of the campaign.

In response to the coronavirus pandemic, Biden largely stayed off the physical campaign trail, instead choosing to hold virtual events or smaller in-person gatherings with mask wearing and physical distancing.

Nationally, Biden won enough states to claim 306 electoral votes to 232 for Trump. It takes 270 Electoral College votes to be elected.

George H.W. Bush’s defeat to former President Bill Clinton in 1992 was the last time a sitting president failed to get reelected.