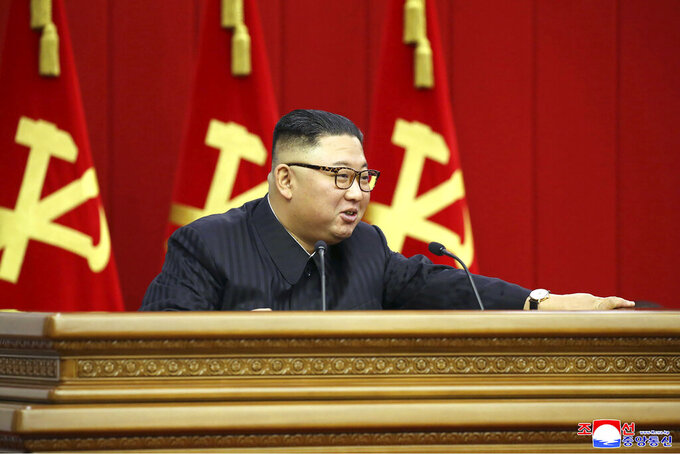 In this photo provided by the North Korean government, North Korean leader Kim Jong Un attends a Workers' Party meeting in Pyongyang, North Korea, Friday, June 18, 2021. Kim ordered his government to be prepared for both dialogue and confrontation with the Biden administration — but more for confrontation — state media reported Friday, days after the United States and others urged the North to abandon its nuclear program and return to talks. Independent journalists were not given access to cover the event depicted in this image distributed by the North Korean government. The content of this image is as provided and cannot be independently verified. (Korean Central News Agency/Korea News Service via AP)

SEOUL, South Korea (AP) — North Korean leader Kim Jong Un “solemnly swore” to navigate his country out of deepening economic troubles as he concluded a major ruling party meeting, acknowledging food shortages and urging officials to prepare for both dialogue and confrontation with the U.S.

Kim Jong Un had presided over a four-day plenary meeting of the ruling Workers’ Party’s Central Committee, which he summoned to discuss efforts to salvage a dismal economy, hurt by years of mismanagement and U.S.-led sanctions that were made worse by pandemic border closures.

As he closed the meetings on Friday, Kim “solemnly swore” on behalf of the Central Committee that the party “will surely break through head-on the difficulties lying in the way of the revolution,” the Korean Central News Agency reported.

Kim earlier ordered his government to prepare for both dialogue and confrontation with the United States, which has been urging the North to abandon its nuclear weapons ambitions and return to talks.

Kim has threatened to bolster his nuclear deterrent and says the fate of diplomacy and bilateral relations depends on whether Washington abandons what he calls hostile policies.

Kim opened the Central Committee plenary on Tuesday by warning of potential food shortages, urging officials to find ways to boost agricultural production because the situation “is now getting tense.” He said the country should brace for extended COVID-19 restrictions, suggesting it would extend border closures and other steps despite the stress on its economy.

The economic setbacks have left Kim with nothing to show for his ambitious summitry with former President Donald Trump, which derailed over disagreements in exchanging the lifting of sanctions with the North’s denuclearization steps.

During his stay in South Korea, Sung Kim will meet with South Korean senior diplomats and participate in a trilateral meeting that includes Japanese nuclear envoy Takehiro Funakoshi on Monday. His travel emphasizes the importance of three-way cooperation in working toward complete denuclearization of the Korean Peninsula, the U.S. State Department said.