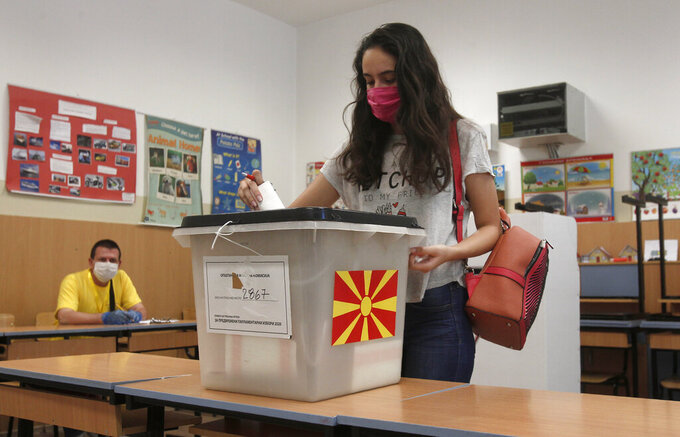 A young woman wearing face mask to protect from coronavirus, casts her ballot in the parliamentary elections in a polling station in Skopje, North Macedonia, Wednesday, July 15, 2020. Voters in North Macedonia headed to the polls on Wednesday in the country's general election despite an alarming spike in coronavirus cases in the tiny Balkan nation. (AP Photo/Boris Grdanoski)

Another official told The Associated Press that “an outside hacker attack spread a virus ... so the public cannot see the results online.”

"Our technical team is working to solve the problem,” he said, speaking on condition of anonymity as he was not authorized to discuss the matter with the press.

Derkoski said that with about 70% of the votes counted there was a close race between the Social Democrats and the center-right VMRO-DPMNE.

The election -- delayed for months due to the pandemic — was held amid a resurgence of the coronavirus in the small Balkan country, with voters donning obligatory masks.

Polling stations closed later than usual to encourage turnout, and authorities also organized two days of advance voting to allow people in quarantine or at greater risk from the virus to cast their ballots from home.

North Macedonia, a former Yugoslav republic with a population of around 2 million, reported more than 8,500 confirmed cases, including 393 deaths, as of Wednesday, with 198 new cases and four deaths reported over the previous 24 hours. The country saw new cases rise in recent weeks after infection-control restrictions were lifted.

Election authorities said turnout had reached 50.8% half an hour before polls closed, which is lower than in previous elections.

Zoran Zaev’s governing Social Democrats called the early parliamentary election when he resigned as prime minister in January after the European Union failed to give North Macedonia a start date for EU membership talks.

Zaev is facing a strong challenge from VMRO's Hristijan Mickoski. The party has softened its earlier opposition to a landmark 2018 deal with Greece that saw the country change its name from Macedonia to North Macedonia, clearing objections for it to join NATO earlier this year.

Zaev, 45, ran much of his campaign on the accomplishment of securing the agreement with Greece that ended a dispute of nearly 30 years.

“I believe our positive campaign has won over citizens,” Zaev said after voting.

North Macedonia has had a caretaker government since his resignation as prime minister in January.

Election campaigns were limited by social distancing rules and calmer than in past elections, which produced vitriolic animosity between the two main parties.

The Social Democrats have governed since 2016 after beating populist conservative Nikola Gruevski of VMRO-DPMNE, who fled to Hungary to avoid serving a two-year jail sentence for abuse of power and corruption.

Gruevski’s successor, Hristijan Mickoski, moved the party toward the center-right but aimed his campaign at voters are still disappointed by the country’s name change.

“People are going to the polls in large numbers from what we can see,” Mickoski said. “They are ready for a big change.”

The election is being monitored by a team of international observers.