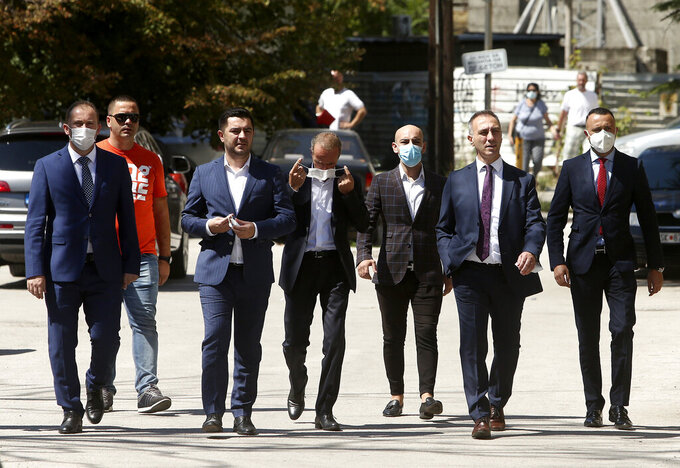 Lawmakers and candidates for ministers of the ethnic Albanian DUI party walk towards the parliament building in Skopje, North Macedonia, Sunday, Aug. 30, 2020. North Macedonia's parliament continues Sunday the debate on a vote of confidence for a new left-wing coalition government after the Social Democrats and their ethnic Albanian partners secured a majority of seats in July's general election. (AP Photo/Boris Grdanoski)

The Social Democrat-led government is to eventually be headed by the country’s first ethnic Albanian prime minister, according to its coalition agreement.

Zaev and his coalition partners won 62 of the Parliament’s 120 seats in the July election.

Zaev, who led the previous government from 2017 to 2020, formed a more streamlined Cabinet with 19 members, seven fewer than before. Nine ministers either kept their positions or were moved to new ones. Seven posts went to ethnic Albanians.

Zaev told lawmakers his new Cabinet will focus on reviving the economy, dealing with the coronavirus pandemic and fighting corruption. He announced 1 billion euros ($1.19 billion) in new foreign investments, a 40% increase in the minimum wage and pensions and a planned judiciary reform.

According to the power-sharing deal with the ethnic Albanian Democratic Union for Integration party, Zaev will hand the prime minister’s office over to an ethnic Albanian politician proposed by his junior partner 100 days before the end of the government’s four-year term, in 2024.

It would be the first time a representative of the largest minority ethnic community have held that position since North Macedonia split from the former Yugoslav federation in 1991.

The conservative opposition fiercely criticized the new Cabinet, claiming it is “incapable” of dealing with the pandemic and fulfilling its promises.

During parliamentary debate, a few hundred people held a rally in front of the European Union’s offices and the parliament building in downtown Skopje, protesting the change of the country’s name to North Macedonia and “disparagement” of the Macedonian national identity and dignity in a push for the country’s Euro-Atlantic integration.