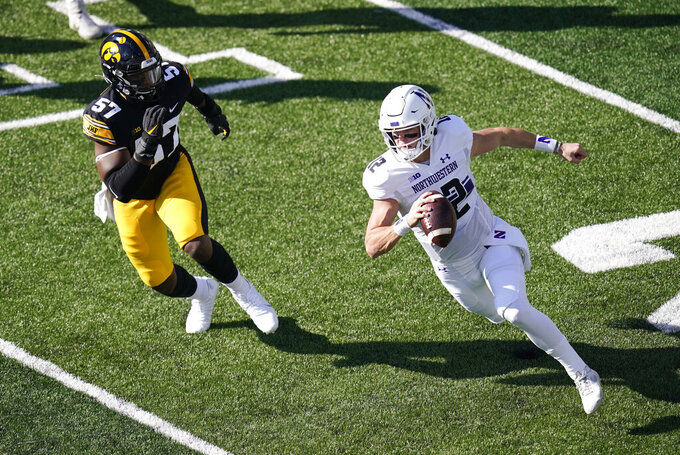 EVANSTON, Ill. (AP) — The sour taste from last season is being replaced by something far sweeter for Northwestern.

The Wildcats come into their game against Nebraska on Saturday with a 2-0 record for the first time since 2015. Sure, it's a modest accomplishment. But coming off a first-to-worst tumble last season, Northwestern will take it.

“We all owned it and we looked at ourselves individually and then we looked at ourselves collectively and talked about not having it be the same thing ever again,” coach Pat Fitzgerald said. “Credit goes, especially, to our older players. I think they came into the offseason and attacked it and wanted to restore a lot of the pride these guys have.”

The Wildcats are off to their first 2-0 start since they won their first five games five years ago. And they're 2-0 in conference play for the first time since they beat Penn State and Wisconsin in 2014.

It's a good start for a team that went from winning the Big Ten West in 2018 to going 3-9 and finishing last in the division with a 1-8 league record.

They blew out Maryland by 40 in the opener, then erased an early 17-point deficit to win at Iowa 21-20 last week. And if they beat the Cornhuskers, they will match their best start in the Big Ten since 2000.

Nebraska (0-1) opened with a 35-point loss at Ohio State and was notified a few days later that Wisconsin would not play last week in Lincoln because of a COVID-19 outbreak. The Badgers had a dozen people in the program — including coach Paul Chryst — test positive for COVID-19.

Nebraska wanted to play Chattanooga in a hastily arranged game once Wisconsin canceled. But the Big Ten denied that request. And coach Scott Frost notices a chip on his team's shoulder.

Nebraska has won five of nine against Northwestern since joining the Big Ten in 2011, and seven of those games have been decided by seven points or fewer. Six have been within a field goal, and each of the past three have come down to the final play of regulation or gone to overtime.

With the Wisconsin game canceled and the Chattanooga request nixed, Nebraska is opening with two road games for the first time since 1995. The ’Huskers are scheduled to host Penn State next week.

Northwestern already has seven takeaways, including a league-leading six interceptions. By comparison, the Wildcats had seven interceptions and seven fumble recoveries last season.

“It was just kind of an anomaly of a year,” linebacker Paddy Fisher said. “Now this year, spending a lot of time in the offseason and the practices in spring ball that we had, really harping on it. And now the practices in fall camp and during the week. Just really getting that ingrained in our minds and really making it muscle memory, second nature, we're starting to see the pieces kinda come together.”

Nebraska receiver Wan’Dale Robinson had one of his best games against Northwestern last season, with 167 yards from scrimmage. He caught seven passes for 123 yards and added 44 rushing, including a 42-yard TD run.

Northwestern quarterback Peyton Ramsey is fitting in with his new team. A graduate transfer from Indiana, he ranked fourth in the Big Ten and 11th nationally as of Thursday with a 70.8% completion percentage.