Not giving it up cold turkey: Bird hunters just winging it 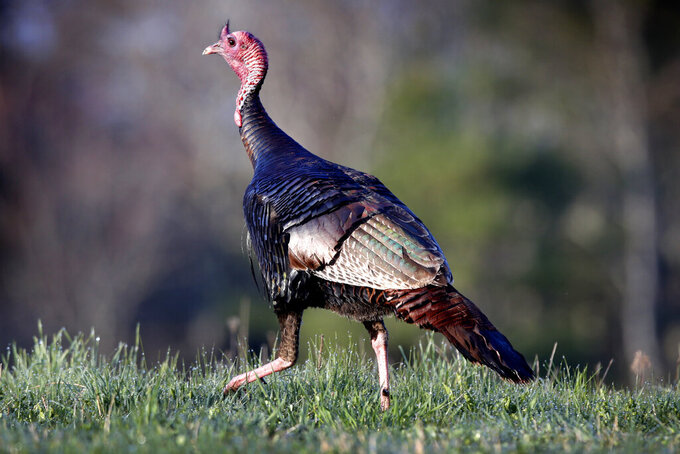 In this Monday, May 4, 2020 photo, a wild turkey crosses a field in Freeport, Maine. States around the country are encouraging hunters to hunt turkeys this spring despite social distancing rules. The hunt will look different than usual because of concerns about the virus. (AP Photo/Robert F. Bukaty)

Every state except Alaska, which is the only state with no turkeys, hosts a spring turkey hunt each year. The birds, whose domesticated cousins grace Thanksgiving tables from Hawaii to Maine, are among America's greatest conservation success stories.

The hunt is taking on a new look in some parts of the country this year due to social distancing laws. Many states, including Maine, are requiring out-of-state residents to self quarantine for two weeks when they enter the state. That functionally eliminates out-of-state hunters from coming to the Pine Tree State to bag a bird.

But all 49 states are going ahead with turkey hunts in some form or another, said Mark Hatfield, national director of conservation services for the South Carolina-based National Wild Turkey Federation. That even includes Hawaii, where the birds aren't native but were introduced in the 1960s.

In Maine, hunter Joel Pitcher said he expects a good season, though it won't be as social an affair as it has been in the past.

“I’m not just going to go with a bunch of buddies, like I normally would. It cuts into it that way. Somebody might call and say hey what are you doing tomorrow? Hunting turkey? That’s not going to happen,” Pitcher said.

Turkey hunting takes place every spring in part to control the population of the birds, which were once numbered in only the tens of thousands before repopulation efforts brought them back. The population rose to 1.3 million in the early 1970s and is now more than 6 million, Hatfield said.

The turkeys have become so successful that in some parts of the country they're overpopulated and can cause nuisances, such as the traffic disruptions that sometimes emerge in suburban Boston when a flock of the birds decides to mill around in the road. A continued hunt is important to manage the population, Hatfield said.

The earliest hunts began in March and some last until June. Hatfield said it's difficult to know how successful this year's hunt will be, but with many hunters laid off or furloughed or simply working from home, they might have more opportunities to participate in what is traditionally a weekend activity. Early season hunters seemed to be having a very successful year, he said.

Two million turkey hunters bagged about 665,000 birds in spring 2014, the most recent year for which statistics are available, Hatfield said. The biggest harvests were in Pennsylvania and Missouri, while Georgia and Texas also had large hauls, he said.

In Vermont, it appears that more hunters are taking part in the spring turkey hunting season this year than last year. In late April, 13% more young hunters participated in the annual youth turkey hunt, based on license sales, and it appeared that 23% more resident adult hunters bought turkey licenses for the start of the spring season, which opened May 1, said Mark Scott, the director of wildlife for the Vermont Fish & Wildlife Department.

“We can’t confirm for sure if this will mean more turkey hunters given that maybe hunters are buying their license earlier than normal,” he wrote in an email. “But based on increased youth participation we feel there is more interest; and we are optimistic that we will see more people getting out into Vermont’s woods and fields.”

But in Kansas, the suspension of non-resident turkey permits has hurt business for Randy Lyons, the owner of Randy’s Turkey Hunting Adventure in the northwestern part of the state. He said he has “zero clients this year.” It is a side business for him, and he normally has five or six clients.

“The virus definitely hasn’t helped. Most of the time we rely on out-of-state hunters," Lyons said.

In New Hampshire, state wildlife biologist Allison Keating said the state has experienced a slight increase in turkey license sales for both adults and youth compared to this time last year.

The state launched an online registration system so hunters can register their birds online, as opposed to having to do it in person. More than 100 turkeys were registered on the first day of the state's weekend for youth hunters, she said.