Not perfect, still golden for Chloe Kim in Olympic halfpipe 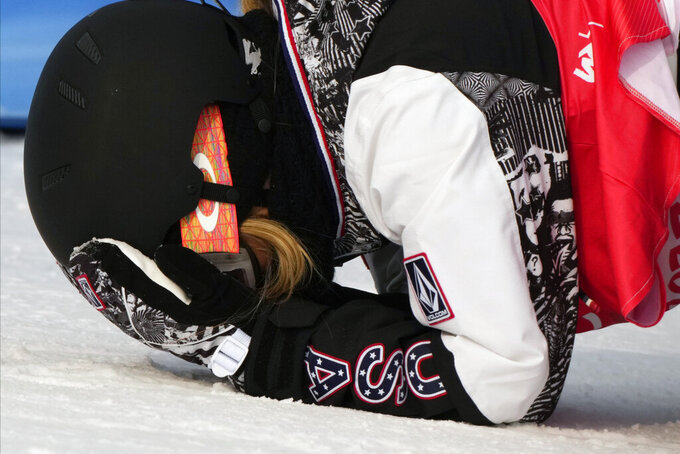 ZHANGJIAKOU, China (AP) — There were doubts, and falls, and fear for Chloe Kim.

Ultimately, there was a gold medal, too.

The 21-year-old American's second straight trip to the top of the Olympic podium — a trip taken Thursday after a terrible pre-contest training session that made her wonder if she really could make it — came with a timely reminder not only for her, but for everyone else paying attention to her latest domination of the halfpipe.

“It’s unfair to be expected to be perfect, and I’m not perfect in every way,” Kim said.

Kim has come as close as anyone this side of Shaun White to “perfect” on a halfpipe. Because of that, there was no real drama coming in about who would win the women’s contest at the Secret Garden Olympic halfpipe. IOC president Thomas Bach came to see it. So did China's burgeoning superstar, Eileen Gu. She had a front-row perch and even hugged it out with Kim between runs.

Kim put her stamp on this one early, knocking down a — perfect? — run on her first trip down the halfpipe. She accomplished precisely what she sought on this Olympic trip.

“Spinning all four ways and mastering the sport has been a goal,” said her coach, Rick Bower.

The ability to ride forward and backward, then spin in either direction from either side, is a holy grail of riding — a skill that, many snowboarders will say, separates the mere acrobats from those who really can ride.

Kim came to China ready to show the world she could do it. But time after time in practice before the contest started, she struggled and fell. It explains her reaction at the bottom of her first run, when she nailed all five jumps she tried, three of which involved jumping while riding backward.

She fell down onto the snow and put her head to the ground. She placed her hands over her mouth. Some 10 minutes later, NBC showed her at the top, still crying tears of joy. She scored a 94, and anyone who's been following this game over the eight years since she came to the halfpipe knew nobody would catch her. Queralt Castellet of Spain finished second and Sena Tomita of Japan finished third.

“I was just was so proud of myself. I had the worst practice ever,” Kim said. “I probably landed my run twice when I’m used to landing it eight times. That kind of puts you in a weird headspace."

By landing the first run — the “safety run,” they call it — her second and third trips down the pipe became a chance to try even bigger tricks. That's where, strangely enough, the stories of “perfect” as they relate to Kim, the snowboarder, and Kim, the person, start to merge.

There was almost no way to top what happened four years ago in Pyeongchang. Kim, whose parents are of South Korean descent, was in their home country and performing live in front of her grandmother for the first time.

After wrapping up the win early, much as she did Thursday, she came out for a victory lap and stomped down her ideal run. Back then, she polished off the trendsetting back-to-back 1080s, a feat no other woman could perform in the pipe.

“It’s been a dream of mine since I was a little girl,” she said that day, "to land a run that’s very important for me.”

“She had been doing a front double (cork) three years ago, but she wasn't doing it the way she liked,” Bower said of a different difficult trick that Kim gave up. “So, she said, ‘I want to do tricks that I’m happy about,' so she went out and got it done."

Only this time, she tried it twice and could not stay upright either time. “Ow my butt,” she posted on Instagram shortly after the second fall, along with picture of her grimacing in pain.

“I was curious to see what would happen. Definitely didn’t go my way,” Kim said. “I did it once in practice and it went well. So, different. We’ll try it another day.”

It was the sort of setback that might have taken the shine off the day for a younger version of the now-two-time Olympic champion. She joined White as the only snowboarder to win back-to-back titles on the halfpipe.

But she sees things differently now. Even after her ideal finish in 2018, Kim went home and realized that life as an Olympic champion wasn't as great as she thought it might be.

There were demands on her time; she could not go out without being noticed. There was a dark side — a trove of racist, anti-Asian messages and posts on social media. She threw her gold medal in the trash (but later fished it out), wondering if fame and fortune were really for her.

As she talked openly after her latest triumph, it sounded as though the real lesson from her roller-coaster day on the halfpipe might very well be the same lesson that she — and everyone — could put to use in life off the mountain, as well.

“There's a lot of pressure and people expect a lot of you, and that's not normal at all,” she said. “What is normal is struggling with those types of situations, like I did this morning. It's just giving yourself constant reminders that it's OK to feel the way you feel, and to do the best you can, and that's all you have to do.”