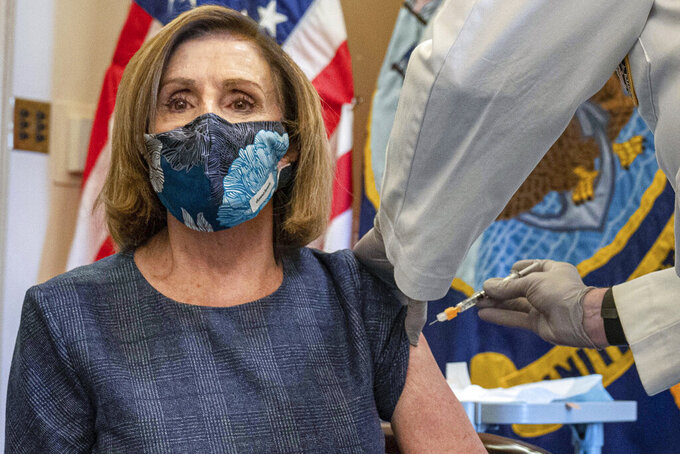 FILE - In this Friday, Dec. 18, 2020, file photo, Speaker of the House Nancy Pelosi, D-Calif., receives a Pfizer-BioNTech COVID-19 vaccine shot from Dr. Brian Monahan, the Capitol physician, in Washington. On Thursday, Dec. 24, 2020, The Associated Press reported on stories circulating online incorrectly asserting that the doctor never removed a cap from the syringe, so she never actually received the shot. Photos and news reports clearly document every step of the process of her successfully receiving the injection. (Ken Cedeno/Pool via AP)

Here’s a look at false and misleading claims circulating online as news about COVID-19 vaccines and uncertainty around coronavirus relief in the U.S. dominate headlines. None of these are legit, even though they were shared widely on social media. The Associated Press checked them out. Here are the facts:

No, a Tennessee nurse didn’t die after getting the vaccine

CLAIM: Tiffany Dover, a nurse manager in Chattanooga, Tennessee, who fainted after receiving her first dose of the Pfizer-BioNTech COVID-19 vaccine on Thursday, is now dead.

THE FACTS: Claims of Dover’s death have no basis in reality. She is alive and worked a shift at CHI Memorial Hospital on Monday, according to Lisa McCluskey, the hospital’s vice president of marketing communications. The claim emerged on Facebook, Twitter, Instagram and YouTube over the weekend following videos that showed the nurse fainting on Dec. 17 several minutes after receiving the vaccine. It also appeared on Reddit, on a subreddit devoted to conspiracy theories, and on a website claiming to show obituaries of deceased people. Some posts used screenshots of Dover’s Facebook and Instagram accounts to claim she must be dead because she hadn’t posted in several days. Others shared screenshots from a public records website, suggesting the appearance of Dover’s name in search results somehow indicated she had died. These claims are bogus, McCluskey confirmed to The Associated Press. Dover told reporters after the fainting episode that she has a condition that can cause her to faint when she feels pain. “It’s common for me,” she told reporters. “I feel fine now.” In the days since then, CHI Memorial Hospital has confirmed Dover is doing well, sharing multiple tweets and a video of the nurse posing with colleagues on Monday afternoon. The CDC offers guidance on fainting after vaccination, which can be common. It says that although fainting has a variety of possible causes, “it is usually triggered by pain or anxiety.”

CLAIM: Photos of House Speaker Nancy Pelosi getting the first dose of the COVID-19 vaccine show that the doctor never removed the orange cap from the syringe, so she never actually received the shot.

THE FACTS: The doctor did not leave a cap on the syringe when Pelosi received her first dose of the two-part Pfizer-BioNTech COVID-19 vaccine on Dec. 18 in front of reporters. Photos and news reports clearly document every step of the process, from the moment Capitol physician Dr. Brian Monahan administered the shot to Pelosi posing with her vaccine card afterward. However, over the weekend, social media users began to share baseless theories that the doctor never removed an orange cap from the syringe, so Pelosi was not actually vaccinated. “Hard to get a shot with the cap still on,” read one post that circulated widely last weekend. “What in the Sam hill is going on here?” read another. “I want to be like Nancy Pelosi and get the vaccine with the cap on it too!” Some of the posts included photos that showed an orange section near the end of the syringe. However, that orange section is not a cap. Photos prove that; they show the needle emerging past it toward Pelosi’s arm. Instead, the orange piece is more likely the needle hub, a plastic piece that attaches the syringe to the needle. Pelosi acknowledged in a tweet that she received the first dose of the vaccine, saying, “Today, with confidence in science & at the direction of the Office of the Attending Physician, I received the COVID-19 vaccine.”

Photo of Pelosi at indoor gathering was taken last January

THE FACTS: A photo of Pelosi at a gathering that was taken last January, before the U.S. introduced strict COVID-19 restrictions, was shared widely in recent weeks on Facebook with a false description. In reality, the out-of-focus photo shows Pelosi gesturing to a crowd at the opening party for Danny Meyer’s Maialino Mare, an Italian restaurant in Washington’s Navy Yard. Anna Spiegel, a food editor at Washingtonian magazine, took the photo on Jan. 7 and posted it that day on Twitter. That same image, however, was reposted more recently with the false claim that it shows Pelosi flouting social-distancing requirements. “Ladies and Gentlemen here’s your speaker of the house enjoying a party after she tells you you can’t have social gatherings,” states a false post on Facebook. Several Facebook users reposted the same false claim, sharing it thousands of times. It was also shared on Parler, a social media platform that’s popular among some conservatives. “Taken 3 days ago,” wrote one Facebook user who shared the false post last week. The post had over 2,400 shares. In fact, it was taken nearly a year ago, before restrictions around mask-wearing and social-distancing had been introduced. In March, the CDC recommended that gatherings of 50 or more people be canceled or postponed. D.C. Mayor Muriel Bowser issued an order on March 24 requiring non-essential businesses to temporarily close and prohibiting the gathering of 10 or more people.

No, Congress did not give itself a pay raise this year

CLAIM: Members of Congress gave themselves more than $40,000 in pay raises this year while only giving Americans $1,200 checks and voting to give just $600 more.

THE FACTS: Congress did not give itself a pay raise this year. The Coronavirus Aid, Relief and Economic Security (CARES) Act signed by President Donald Trump in late March awarded $1,200 stimulus checks to most Americans. As news spread this week that Congress had passed a $900 billion year-end COVID relief package that would give $600 direct payments to those earning up to $75,000, a popular post on Facebook falsely claimed members of Congress had given themselves massive pay raises of more than $40,000. “They gave you $1200… six months later they’ll give you $600...in the same year they gave themselves $40k + pay raises,” reads the widely shared post. It concludes: “Are you pissed off yet? You should be.” House Appropriations Committee spokesperson Evan Hollander confirmed to The Associated Press that congressional salaries did not go up this year. “In fact, the legislation just passed specifically blocks the COLA that would otherwise have taken effect,” Hollander said, referring to an automatic “cost of living adjustment” in pay. Members of Congress have not received that adjustment since 2009. President Donald Trump has suggested he won't sign the bipartisan COVID relief bill unless the stimulus payments are increased from $600 to $2,000. Most senators and members of the U.S. House earn an annual salary of $174,000. The speaker of the House earns $223,500, and the president pro tempore of the Senate and the majority and minority leaders in the House and Senate earn $193,400. The false claim that Congress gave itself a raise also circulated online in March, when Congress passed the CARES Act.

Biden family does not own Dominion Voting Systems

THE FACTS: Dominion Voting Systems has been a target of a litany of false fraud claims since the 2020 election, and the latest theory that attempts to link the president-elect to the company is also bogus. Stephen Owens has no relationship to the Biden family, a spokesperson for Staple Street Capital confirmed. This false claim is based on two people sharing a common last name. “Biden’s sister is married to Stephen Owens, who owns Dominion Voting Systems,” read Facebook posts viewed hundreds of thousands of times this week. Another variation of the claim suggested an even more tenuous connection. “Valerie Biden Owens (Joe’s sister) is married to John Owens,” a Facebook post read. “His brother, Kevin Owens, is founder of Staple Street Investors, which owns Dominion Voting.” It’s true that the president-elect’s sister is married to a man named John Owens, according to a New York Times wedding announcement from 1975. According to the Times, the groom’s brother, R. Kevin Owens, was the best man. But Stephen Owens bears no relation to either of these individuals, according to Tony Fratto, a partner with the PR firm Hamilton Place Strategies who spoke to The Associated Press on behalf of Staple Street Capital and Dominion. Fratto said Staple Street Capital co-founder Stephen Owens has no relationship with the Biden family. In a fact-checking page on its website, Dominion says that it is not affiliated with or owned by any political figures or political parties.