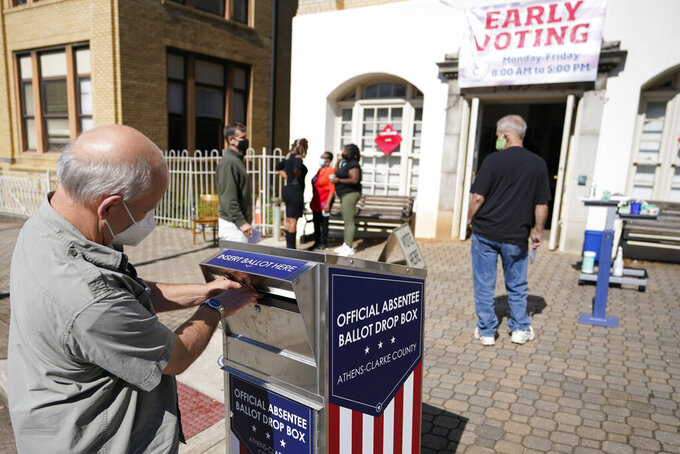 FILE - In this Monday, Oct. 19, 2020 file photo, a voter submits a ballot in an official drop box during early voting in Athens, Ga. On Friday, April 2, 2021, The Associated Press reported on stories circulating online incorrectly asserting “Georgia’s new anti-voting law makes it a jail-time crime to drop off grandma’s absentee ballot in a drop box.” But the election bill known as SB 202, signed into law on March 25, has an exception allowing people to drop off ballots on behalf of their relatives. It also allows a caregiver to deliver a completed ballot on behalf of a disabled person, or a jail employee to deliver a completed ballot on behalf of someone who is in custody. (AP Photo/John Bazemore)

Delivering grandma’s ballot not a crime under Georgia law

CLAIM: “Georgia’s new anti-voting law makes it a jail-time crime to drop off grandma’s absentee ballot in a drop box.”

THE FACTS: Delivering grandma’s ballot won’t land you behind bars in Georgia, despite posts on Facebook, Instagram and Twitter falsely claiming it will. The election bill known as SB 202, signed into law on March 25, has an exception allowing people to drop off ballots on behalf of their relatives. Social media posts making the false claim referenced an excerpt from the law that says any person who “accepts an absentee ballot from an elector for delivery or return to the board of registrars except as authorized by subsection (a) of Code Section 21-2-385 shall be guilty of a felony.” However, that referenced section of the Georgia code also explains that family members — including grandchildren and grandparents — can mail or deliver ballots for each other. The code also allows a caregiver to deliver a completed ballot on behalf of a disabled person, or a jail employee to deliver a completed ballot on behalf of someone who is in custody.

CLAIM: COVID-19 tests cause cancer because they are sterilized with ethylene oxide.

THE FACTS: Ethylene oxide is a gas commonly used to sterilize medical equipment. It is also used in the sterilization of spices and cosmetics. While it is listed by federal agencies as a carcinogen with long-term exposure, experts say the gas is used only in small amounts to sterilize COVID testing kits and would not present cancer hazard. A video being shared online makes the claim citing nose swab tests used for COVID-19 detection. In the video, a man illustrates the point using a COVID-19 home test kit from the National Health Service in the United Kingdom, which has a label noting it was sterilized with ethylene oxide. “They are purposely killing us,” the man says. “It is one of the worst, worst chemicals for causing cancer and people are sticking it up their kids’ noses to get them into school.” But ethylene oxide is not a component of the test. Dr. Alexander Edwards, an associate professor in biomedical technology at the University of Reading in England, told The Associated Press that the gas is used in the sterilization process because it does not affect the product like heat or steam would when used in the sterilization process. “It’s not going to be present in any meaningful way at the time that you actually opened your test,” Edwards said. According to the U.S. Centers for Disease Control and Prevention, ethylene oxide is often used to sterilize medical equipment that are moisture or heat sensitive. Posts making the false claims were shared on TikTok, Facebook and Instagram. “Did you know the con-vid 19 swab test contains a highly carcinogenic sterilizer called ethylene oxide? The most toxic cancer causing substance ever produced,” one Facebook said. The Department of Health and Social Care in the U.K. addressed the falsehood on Facebook. “There are false and misleading reports that lateral flow tests can give you cancer,” the post said. “These rapid #COVID19 tests have been rigorously tested and are safe.” The U.S. Food and Drug administration created strict standards for the use of ethylene oxide on medical devices after it was found that the gas could cause cancer with long-term and occupational exposure. Experts say there is no concern about the gas being left on COVID-19 tests. “It is not something that would linger on the product,” Edwards said.

Farmworker union’s flag was the backdrop for Jill Biden speech

CLAIM: First lady Jill Biden gave a speech with the Nazi flag in the background.

THE FACTS: On Wednesday, Biden made a visit to The Forty Acres, the first headquarters of the United Farm Workers labor union, in Delano, Calif., and gave a speech in front of the union's flag — not a Nazi flag. The flag features a black eagle surrounded by a white circle on a red background. Yet multiple social media users made false claims about the flag. “I don’t know if there are words to fully convey how hilarious it is that ‘Dr’ Jill Biden butchered the Spanish language while giving a speech in front of a Nazi flag,” said one Twitter user. Lauren Araiza, an associate professor who teaches history at Denison University, called the effort to draw similarities between the eagle used on the UFW flag and the one associated with the Nazis “ridiculous.” Araiza said the eagle on the red and black flag was something Mexican Americans could easily relate to. “It’s based on the Aztec eagle, and they made it stylized in that way because they wanted a graphic that anybody could draw and then it would be easily printable,” said Araiza, author of the book, “To March for Others: The Black Freedom Struggle and the United Farm Workers.” The flag was created in the 1960s by Chávez’s brother, Richard Chávez, and his cousin, Manuel Chávez. The union’s website includes a quote from Chávez explaining the flag’s design: “A symbol is an important thing. That is why we chose an Aztec eagle. It gives pride…When people see it they know it means dignity.” In addition to red and black being eye-catching colors, the tone of red used in the flag was inexpensive for printers, Araiza explained. “These people are just trying to use scare tactics to delegitimize the president and first lady’s open support of the UFW and, by extension, all Mexican Americans,” Araiza said. Gavriel D. Rosenfeld, a professor of history at Fairfield University, who specializes in the history of Nazi Germany, also knocked down the claims. “One source of subtle confusion may be the fact that many Nazi flags featured an eagle with a swastika, the latter being a very geometric shape; the UFW flag also features a very geometrically rendered Aztec-style eagle that could evoke the geometric aspects of a swastika,” Rosenfeld said in an email. “But of course, there’s no swastika on the UFW whatsoever.”

CLAIM: The sports apparel company Nike is releasing a shoe dedicated to Satan.

THE FACTS: Nike was not involved in a collaboration between rapper Lil Nas X and New York-based art collective MSCHF to design Satan-themed sneakers displaying the Nike brand. Nike is suing MSCHF to stop the release of the shoes, which were made “without Nike’s approval or authorization,” the company told the AP on Monday. The music video for Lil Nas X’s new song “Montero (Call Me By Your Name)” shows the musician, whose real name is Montero Lamar Hill, descending into hell, dancing for Satan and claiming the devil’s horns as his own. Following the video’s release on March 25, MSCHF announced on its website that it would collaborate with the rapper on a limited release of “Satan shoes” — 666 pairs of black Nike Air Max 97 sneakers with a pentagram-shaped charm. MSCHF claimed the sneakers also contained a drop of human blood. Responding to the news, thousands of social media users shared viral posts claiming Nike was responsible for the Satan-themed shoes. “Nike & Lil Nas X will launch their new demonic shoes on March 29, 2021 for $1,018 USD,” read a Saturday Facebook post. But Nike sent The Associated Press a statement saying it did not participate in the development or marketing of the themed sneakers. “We do not have a relationship with Lil Nas X or MSCHF,” the statement read. “Nike did not design or release these shoes and we do not endorse them.” In a later statement, Nike said it filed a trademark infringement and dilution complaint against MSCHF on Monday to stop the release of the shoes. MSCHF CEO Gabe Whaley told the AP in an email that Nike “did not have any involvement whatsoever” in the project. MSCHF purchased the shoes from Nike, then made its own modifications to the shoes before marketing them, Whaley confirmed.

CLAIM: The U.K.’s University of Oxford is considering removing sheet music from its music curriculum as part of sweeping changes intended to “decolonize” the program.

THE FACTS: There are no plans under consideration to remove sheet music or western musical notation from the music curriculum at Oxford University, according to Stephen Rouse, head of university communications. Social media users circulated the false claim based on stories in the British media. “Attack of the woke: Oxford University is considering removing sheet music from its curriculum over claims that musical notation has roots in “colonialism” and “complicity in white supremacy,” one Facebook user wrote on Monday. The bogus claims, shared thousands of times, have roots in an article published in Britain’s Daily Telegraph. The article reported that documents showed some faculty members had proposed reforms to address the music program’s focus on white European culture, including “rethinking the study of musical notation.” It did not report that the complaints meant the university was considering ditching sheet music altogether. Tabloids and right-wing media outlets made that false assumption in their coverage of the article. Rouse told The Associated Press that while the music faculty is planning to expand its music curriculum to broaden offerings, cutting sheet music is not part of the plan. He added that many of the views the Telegraph article attributed to “professors” came from a single individual. Rouse shared a statement from the university’s music faculty. “While retaining (and in no way diminishing) our traditional excellence in the critical analysis, history and performance of the broad range of western art music, we are exploring ways to enhance our students’ opportunities to study a wider range of non-western and popular music from across the world than is currently on offer, as well as music composition, the psychology and sociology of music, music education, conducting, and much more,” the statement read. The music faculty said claims that the university is considering removing sheet music from its curriculum are “completely incorrect.” “No such proposal or suggestion has been made about sheet music or western musical notation,” the statement read.