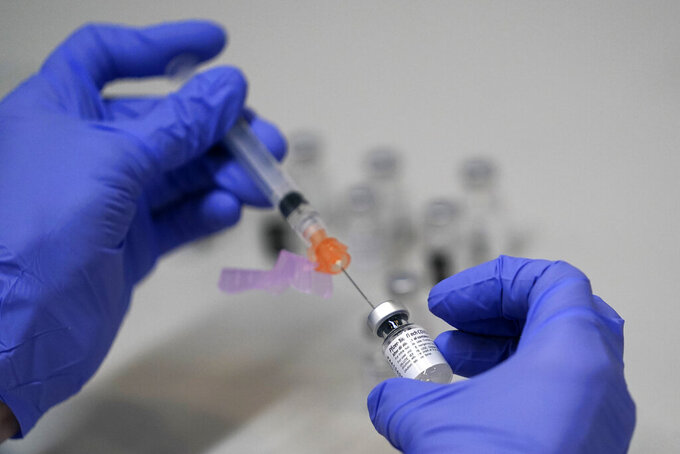 FILE - In this Tuesday, March 2, 2021 file photo, a pharmacy technician loads a syringe with Pfizer's COVID-19 vaccine at a mass vaccination site at the Portland Expo in Portland, Maine. On Friday, March 7 The Associated Press reported on stories circulating online incorrectly asserting that Pfizer admitted in its COVID-19 clinical trial protocol document that vaccinated people can “shed” the vaccine, emitting materials that can spread to unvaccinated people by inhalation or skin contact.(AP Photo/Robert F. Bukaty, File)

COVID-19 vaccine does not spread by inhalation or skin contact

CLAIM: Pfizer admits in its COVID-19 clinical trial protocol document that vaccinated people can “shed” the vaccine, emitting materials that can spread to unvaccinated people by inhalation or skin contact.

THE FACTS: Pfizer’s COVID-19 vaccine does not shed from person to person, nor has the company admitted any such thing. “The Pfizer-BioNTech COVID-19 vaccine is a synthetic mRNA vaccine and does not contain any virus particles. Because there is no virus produced in the body, no shedding occurs within the human body,” Pfizer spokesperson Jerica Pitts told The Associated Press in an email. “The vaccine cannot be inhaled via shedding and can only enter the human body through an administered dose.” The U.S. Food and Drug Administration approved Pfizer’s vaccine in December after extensive clinical trials. Women who were pregnant or breastfeeding were excluded from joining those early clinical studies, and participants were instructed to take measures to avoid pregnancy. False posts on social media are now misinterpreting a portion of Pfizer's November clinical trial protocol that used standard language intended to protect pregnant women and monitor any potential exposure. The posts twist the meaning to promote the bogus theory that a vaccinated person can shed the vaccine or provoke supposed side effects in another person. The Pfizer document says any exposures during pregnancy should be reported, and defines such cases broadly to include instances where a pregnant woman is exposed to the vaccine “by inhalation or skin contact” or if a man who received the vaccine or was exposed to it “then exposes his female partner prior to or around the time of conception.” Dr. Justin Brandt, an assistant professor at the department of obstetrics, gynecology and reproductive sciences at Rutgers Robert Wood Johnson Medical School, said that language is “far-reaching to protect pregnant women," and is relevant to certain other vaccines that contain live viruses, which Pfizer's COVID-19 vaccine does not. Dr. Shobha Swaminathan, an associate professor of medicine at Rutgers New Jersey Medical School, referred to the document’s language as “generic” meant to cover cases of “any potential exposures, including possible accidental ones.” Swaminathan said that “exposure” through inhalation or skin contact could refer to incidents where a pregnant woman was near a syringe of the product that accidentally broke. But in the case of COVID-19 vaccines, the degree of absorption from spilling the vaccine on your skin is “probably going to be negligible to non-existent,” Swaminathan said. Regarding the document’s guidelines requiring reporting if a vaccinated man potentially exposes a woman “around the time of conception,” Swaminathan said the language is meant to gather information on any type of exposure before the risks are known. “Initially, you might not potentially know whether any of the vaccine is actually getting into the semen if any of the semen are affected,” Swaminathan said. At this stage of research, however, she said: “We know that it really does not affect fertility at all.”

No one sent a ‘spy plane’ to surveil Arizona election audit

CLAIM: Air traffic maps show that a government spy plane has been circling over the Veterans Memorial Coliseum in Phoenix to monitor an audit of Maricopa County ballots taking place there.

THE FACTS: Air traffic maps do show a plane flying in the Phoenix area near the site of an unprecedented recount of ballots from November’s election. But the Phoenix Police Department confirmed it was the department’s plane conducting unrelated police business. “We have nothing, zero, zilch to do with that,” Maggie Cox, public information sergeant for the department, told the AP. The department’s planes are called on for many things, Cox said, but the election audit has not been one of them. On one of the flights, the plane was helping police work a stolen vehicle case, Cox said. The false surveillance claim circulated on websites that have previously spread election-related conspiracy theories. Their stories featured images of air traffic maps showing a Pilatus PC-12/47E aircraft flying in the Phoenix area, west of the Veterans Memorial Coliseum. Some of the stories pointed out that the Phoenix Police Department owns an aircraft with that description, which led to the false speculation that law enforcement could be surveilling the stadium. The recount in Maricopa County has been contentious. Cyber Ninjas, the company Arizona’s Republican-led state Senate hired to do the audit, initially refused to release its policies and procedures for re-tallying by hand the 2.1 million ballots in Arizona's most populous county. Joe Biden won Arizona by nearly 10,500 votes and won Maricopa County by just over 45,000 votes.

Amazon doesn’t take Dogecoin as payment on its site

CLAIM: Amazon and Dogecoin struck a deal for Amazon to accept Dogecoin on its site.

THE FACTS: Amazon confirmed it doesn’t take any cryptocurrency as payment for its products, and no deal was struck with Dogecoin. However, third-party applications can purchase Amazon gift cards on the customer’s behalf by exchanging crypto for government-issued currency. When two software developers started the cryptocurrency Dogecoin in 2013, it was created as a joke. For most of its seven-year history, each Dogecoin was worth less than a percentage of a cent. In May, however, the cryptocurrency peaked in value at 66 cents. Digital currencies have increased in value over the last 18 months as a greater number of companies have accepted them as a form of payment, the AP reported. As part of this rise in adoption, misinformation has spread online about which companies accept cryptocurrency. A post on Facebook falsely claimed, “AMAZON NOW ACCEPTS DOGECOIN!!!!” A YouTube video announced, “DOGECOIN SIGNS AMAZON DEAL! (BREAKING NEWS!).” In an email asking whether Amazon currently accepts Dogecoin or any cryptocurrency as payment, Amazon spokesperson Nell Rona said, “No.” Ross Nicoll, one of the core developers who keeps Dogecoin running, also confirmed in an email that Amazon and Dogecoin had not discussed using the cryptocurrency on the site. Confusing the situation is the fact that a small number of third-party applications that manage cryptocurrency serve as intermediaries for consumers who want to make purchases online. “Customers can purchase Amazon gift cards using Bitcoin from a small number of authorized resellers,” Rona said in an email. One such reseller is BitPay, which announced on Tuesday that it now facilitates the use of Dogecoin to purchase gift cards on sites like Amazon. But that still doesn’t mean that Amazon accepts cryptocurrency on its site. Amazon receives government-issued currency when BitPay purchases gift cards on behalf of the customer. “BitPay’s Chrome browser extension enables users to turn crypto into gift cards for redemption at the merchant’s site,” Jan Jahosky, a BitPay spokesperson, told the AP in an email.

CLAIM: Kentucky Derby winner Medina Spirit’s jockey John Velazquez turned down a White House invite, saying that if he wanted to see a horse’s behind he would have come in second place.

THE FACTS: After the dark brown colt Medina Spirit and jockey John Velazquez won the Kentucky Derby by a half-length, a fake quote attributed to Velazquez began circulating on social media. “BREAKING NEWS,” one Facebook user wrote in a post shared more than 6,000 times. “Derby winner Medina Spirit’s jockey John Velazquez turned down a White House invite today saying ‘If I wanted to see a horse’s ass I would of came in second.’” Ron Anderson, Velazquez’s agent, confirmed to The Associated Press that the post is inaccurate. The jockey has not been invited to the White House, Anderson confirmed. “This is ridiculous,” Anderson told the AP in a phone call. “In a million, zillion years, Johnny would not say that about anything or anyone.” An internet search revealed no legitimate sources for the quote, which has circulated for years surrounding the Kentucky Derby in reference to different jockeys and horses, even at times by the same Twitter users in different years. In 2018, Reddit users joked that the quote came from the winning horse, Justify.