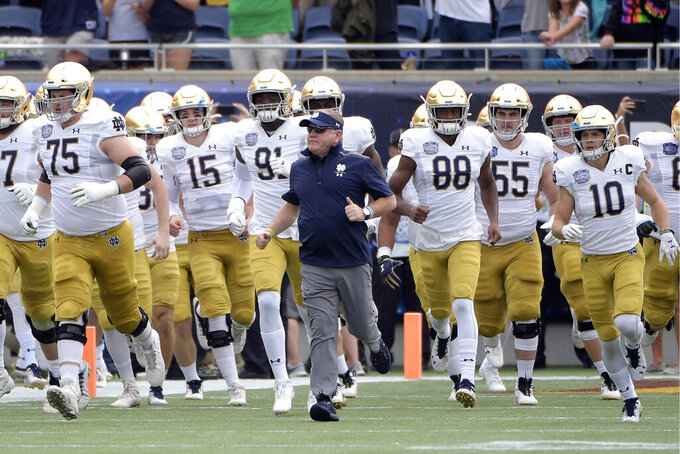 FILE - In this Dec. 28, 2019, file photo, Notre Dame head coach Brian Kelly, center, runs onto the field with his players before the Camping World Bowl NCAA college football game against Iowa State in Orlando, Fla. The Atlantic Coast Conference and Notre Dame are considering whether the Fighting Irish will give up their treasured football independence for the 2020 season play as a member of the league. (AP Photo/Phelan M. Ebenhack, File)

Notre Dame opens its season as an Atlantic Coast Conference football member against visiting Duke on Sept. 12 and won’t face Navy for the first time in more than nine decades as part of the ACC’s reconfigured schedule due to the coronavirus pandemic.

The league on Thursday released the schedule featuring the Fighting Irish, who are giving up their coveted football independence and competing for the ACC title this season. The ACC had announced plans last week for a 10-game league slate with one nonconference game and its championship game played either Dec. 12 or 19.

Those nonconference games are required to be played in the member school's home state, while opponents must meet ACC medical protocol requirements that include regular testing for athletes, coaches and staff to try to control the potential spread of coronavirus.

That report from ACC's medical advisory group also recommends schools evaluate travel policies for games, including modes of travel such as buses or flights, lodging accommodations and the size of the travel party. That comes as the 15 teams travel within an ACC footprint spanning nearly the entire Atlantic Seaboard from Massachusetts to Florida, and moving west into Kentucky and Indiana.

Games within 250 miles of the school are considered reasonable for bus travel while schools typically take charter flights when needed, according to information the league provided by email to The Associated Press. The ACC “maxed out” on 17 scheduling opportunities to pair league schools within 250 miles of each other while the decision on whether to travel by bus or plane beyond that distance is left to the member schools.

Until Thursday, league teams had been holding offseason workouts or starting preseason practices without knowing for sure who they would play or where in roughly a month.

"I figured we were going to play, we just didn’t know the who, when and where," Georgia Tech linebacker David Curry said.

The Fighting Irish and Midshipmen were originally scheduled to play for the 94th straight season in Dublin, Ireland. The pandemic forced the relocation to Navy’s home field in Annapolis, Maryland, for the first time in the history of the series on Sept. 5, along with the cancellation of Notre Dame's games against Wisconsin, Stanford and Southern California as the Big Ten and Pac-12 went to league-only schedules.

Now Notre Dame’s lone nonconference game will be a previously scheduled visit from Western Michigan on Sept. 19. Navy announced Thursday it would replace Notre Dame with BYU this season, along with an agreement to extend the Notre Dame series contract to 2032.

Notre Dame, a member in all other league sports, already had a scheduling agreement to annually play five or six games with ACC teams as an independent. The Irish were set to play five-time reigning ACC champion Clemson, Wake Forest, Pittsburgh, Duke, Georgia Tech and Louisville this year.

Notre Dame’s marquee matchup at home with Dabo Swinney's Tigers remains in its originally scheduled Nov. 7 slot, while the Fighting Irish added ACC matchups with Florida State, Boston College, Syracuse and North Carolina – with that game coming on the road the day after Thanksgiving.

But the SEC went to a league-only schedule a day later to eliminate those games, too.

UCF’s visit to Georgia Tech on Sept. 19 stands as the most notable nonconference game on the schedule. The first game of the season is UAB’s visit to Miami on Sept. 10 on a Thursday night, followed by VMI’s trip to Virginia a day later.

Clemson and UNC have yet to announce a nonconference opponent. Both of those games will come Sept. 19.

“Even when they said who we were going to play (last week), it still doesn't have a life to them until they get a date for each game,” Tar Heels coach Mack Brown said after Thursday's practice. “So I think it kind of came to reality today that, ‘Hey, we may actually play, this is important, we better go to work.'"